Lama Chuck Stanford is moving on from his post at Rime Buddhist Center, but his legacy will remain. 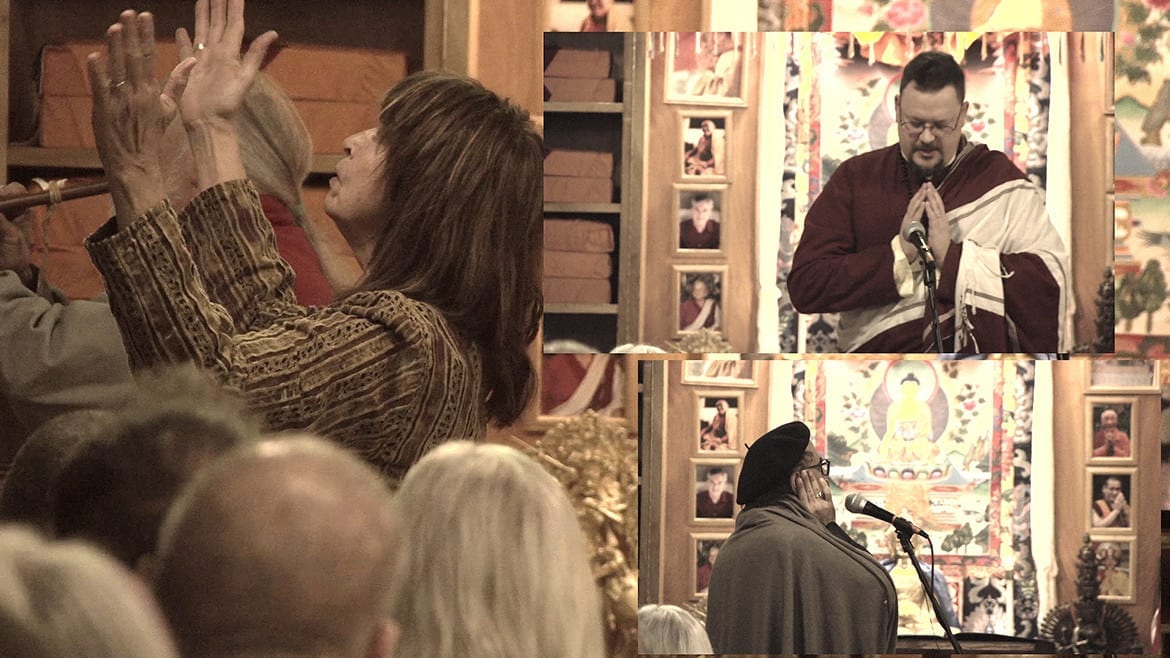 Lama Chuck Stanford is standing just inside Kansas City’s Rime Buddhist Center on a frosty Sunday morning in late December, urging the morning’s volunteer greeter to come in from the cold. She can welcome people once they come indoors, he says. It’s what other greeters do.

As visitors arrive to the entryway of the 125-year-old building in Kansas City’s core, they leave their shoes in cubbies, then walk past a table with tea offerings near the bookstore and gift shop toward a table with katas – white scarves. Everyone takes a kata as part of a gratitude ceremony to recognize Lama Chuck’s final Sunday service at Rime.

Incense permeates the stillness as people fold their legs and sit on red cushions and mats used for meditation. The only noises are those of sock-footed kids attending class in the building’s loft.

Then, once everyone is assembled, horns, drums and cymbals fill the Rime Buddhist Center. Those seated rise, as Lama Chuck Stanford enters and takes his regular seat beneath colorful Tibetan prayer flags and in front of a framed photo of the Dalai Lama. Stanford’s eyes close at times, his voice monotone through chants and prayers. Then his voice emerges from the chants with a cheerful greeting: “Good morning.”

With the close of 2015, Stanford has just stepped down from his position as leader of Rime Buddhist Center. During his 20-year tenure Rime’s influence grew from gathering a few souls at a community center to being seen as a dynamic force in Kansas City’s religious community, while providing an accepting spiritual home for the metro’s less fortunate, including the homeless and the incarcerated. 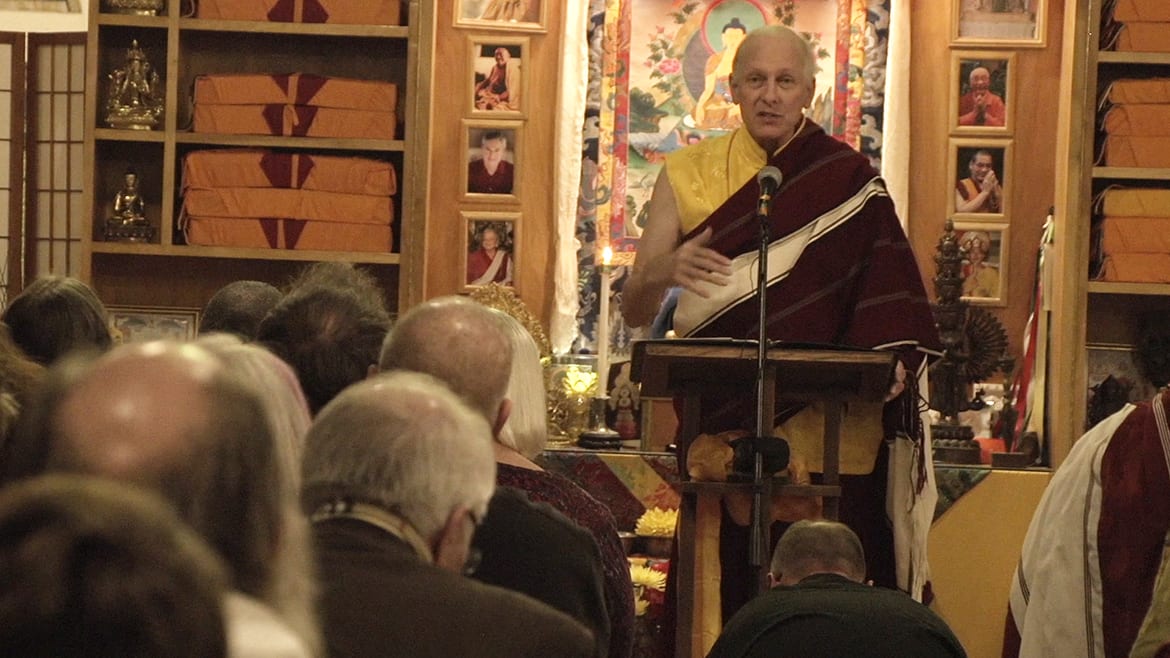 A KC Lama’s path to Buddhism

Like many who find their spiritual home later in life, Stanford lost interest in his Christian upbringing as a teenager. Feeling that something was missing, he explored other religions.

“I remember going to a Quaker meeting where they sit in silence and folks can stand up and say something if they feel compelled,” he says. “I liked it, but it still wasn’t quite the right fit.”

Some years later he was taking a yoga class and the upstairs had a Buddhist shrine and meditation cushions.

“I started attending, and I found I liked the Buddhist world view very much,” he says.

He envisioned a place where like-minded people could meet, so he and his wife, Mary, rented a room at Roeland Park Community Center in the early 1990s. Stanford was running an event-planning business and invited other people to a non-sectarian Buddhist gathering.

Soon they were holding meditation sessions and classes on Buddhism in what at first was called the Mindfulness Meditation Foundation. The name later was changed to Rime Buddhist Center and Monastery and Tibetan Institute of Studies.

The renowned Tibetan teacher Orgyen Kusum Lingpa asked to ordain Stanford as a Lama in 1997.

“This was something I had never considered or even desired or thought about,” he says. “So, he gave me one year to consider it. He said he would be back next year and wanted my answer. So after a year of thinking about and meditating on it – when he returned in 1998, I said I was ready.”

Stanford’s name as a Tibetan spiritual leader is Lama Changchup Kunchok Dorje, but he has always preferred Lama Chuck. Stanford has made many trips to India to receive lessons from the Dalai Lama and to Golok, Tibet for further study.

Rime Center opened at its present location at 700 West Pennway, in the western Crossroads district, in the year 2000. These days, several hundred people attend classes, services and workshops weekly, ranging from meditation to the basics of Buddhism and Tibetan language classes.

Many know Stanford for his continued outreach to prisoners.

At his final Sunday service he read from letters he had received thanking those who provided holiday cards to those in jail. “You made us feel like we matter,” one prisoner wrote. The letters had a “tremendous impact for our spiritual morale.”

“In the back of my mind I felt some fundamental attraction to do something with inmates in prison and Buddhism,” Stanford says.

After volunteering at the state prison in Lansing, Kansas, he approached the Missouri prison system and discovered officials there did not recognize Buddhism as a religion yet.

“We had to petition them and go before a board, and it took like two years,” he recalls.

“People who have abuse in their life or given up on society want to go to something more ancient.” – Michael Medis

He is known for his work around the metro area, too. Stanford is the Buddhist member for the Greater KC Interfaith Council (GKCIC). He wrote a column on Buddhism for the Kansas City Star, organized Tibetan refugee sponsorships as well as volunteer efforts with Kansas City’s Harvesters and the city’s homeless population. Members of GKCIC recognized Stanford’s work with the Bodhisattva Award — given to someone whose work benefits others — at a recent New Year’s Eve early-morning event, the “World Peace Meditation.” [see video above]

“Lama Chuck devoted 20 years to Rime, and to promoting peace in the lives of people in the city,” Mayor Sly James told those gathered on New Year’s Eve. “I want to commend him on a lifetime of service to others, including some of the most vulnerable — the homeless, refugees, prison inmates and the poor. Rime Buddhist Center has been a welcoming spiritual institution in Kansas City.”

East and West: A Balance

Friend and member of the GKCIC Fr. Michael Medis remembers Stanford’s good humor and distinctive laugh when he met him a decade ago.

He finds in his own Eastern orthodox tradition that people have an interest in what might be considered exotic.

“People who have abuse in their life or given up on society want to go to something more ancient,” he says.

Even Lama Chuck’s message for his final Sunday service, with a theme of choosing love over fear, featured cultural nods to wisdom from Yoda to Mark Twain to an “Extreme Makeover” reference.

“I’m a Westerner and I am who I am,” Lama Chuck says when asked about the dichotomy. “I have to relate my life experiences. I think it works — don’t you?” he asks his wife, Mary Stanford.

They both emphasize the meaning behind Rime. It means non-sectarian, and this inclusion factor was important.

“Here in the Midwest you have something people can feel comfortable with,” Mary Stanford says. “Then they can explore different avenues and it is open. It was important that we had a sense of community. You have to [include the Western part] for it to work.”

Following Stanford’s last Sunday service, the office is a flurry of activity. Volunteers are gathering chairs to set up for the New Year’s Eve meditation gathering in a few days. When Stanford leaves, Lama Matt Rice will become the spiritual director and Gabby Otto, chair of the board for many years, will handle administrative duties as executive director.

The time was right to retire, says Stanford, who is 66. “Twenty years is long enough,” he says. He and Mary are planning a trip to Mexico with their family. It’s a tradition. “It’s like my Christmas gift to them,” he says.

As the final Sunday service ends, those attending rise to their feet, take their ceremonial white scarves – the katas – in their hands, and form a line that snakes into the hallway.

One by one they wait to offer their kata to Lama Chuck to show their gratitude for his two decades of service.

Lama Chuck takes the kata offering, drapes it around the neck of the person standing before him, and then the two bow until their heads meet.