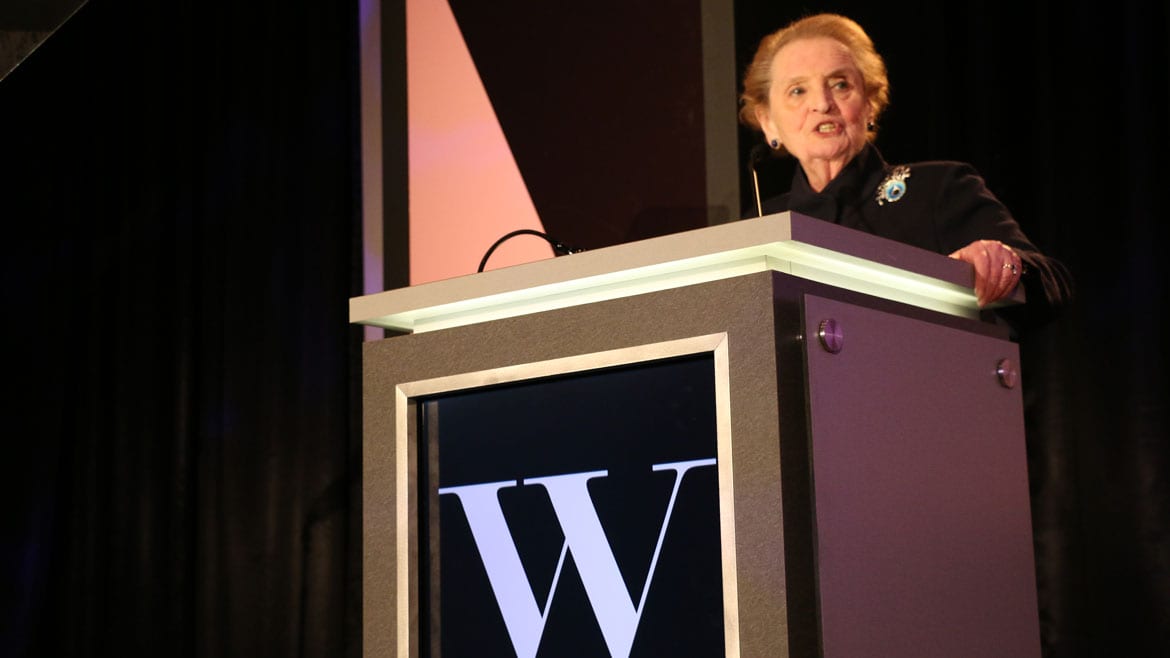 Eighteen years to the day that Madeleine Albright was nominated to be the first female Secretary of State, she reflected on her career and the challenges facing women and girls all over the world at the 22nd annual Women’s Foundation luncheon in Kansas City, Missouri.

“The problem of gender discrimination isn’t limited to any one country; it’s a global problem demanding a global response,” she said.

At the luncheon, the foundation also announced the preliminary findings of its study of the status of women in Missouri.

The study, conducted in partnership with the Truman School of Public Affairs at the University of Missouri, focused on the income gap, childcare, healthcare, state leadership and economic security of seniors.

“In some regions of the state, women face significant obstacles to healthcare, quality childcare and income equality,” said Jacqueline Schumacher, who is the primary researcher on the study.

The first fact Schumacher shared was that, in Missouri, women who work full-time earn 29 percent less than male workers doing the same work. That means women make 71 cents  for every dollar made by men.

Schumacher said that that Missouri’s income gap is larger than the national disparity of 78 cents for every dollar.

Economic inequality for Missouri women also extends well into their later years, Schumacher said. Of the more than nine percent of Missouri seniors who live in poverty, two-thirds are women.

Another key indicator for women’s ability to join and remain in the workforce is availability of childcare.

The study found that twenty seven percent of counties in the state lack any accredited childcare centers, including three counties with the highest population of children ages 0–4.

“Many families are faced with difficult childcare decisions due to a lack of information,” Schumacher said. “Missouri is the only state without a quality rating system in place.”

The full study, which will be released in January, will inform the foundation’s plan to improve the status of women in the state.

“Understanding the unique challenges faced by women is the first step toward addressing these problems with real, actionable solutions,” said Wendy Doyle, President and CEO of the Women’s Foundation.

“The Women’s Foundation will be using the results of this project to work towards policy solutions that help raise up women and their families,” she continued.

Looking at the leaders that might work towards policy solutions, the study found that only 25 percent of seats in the Missouri general assembly are held by women.

A lack of women in leadership roles is something Albright echoed in her remarks.

“It’s true that many historians discount the past political achievements of women,” she said.

“They say the queens and empresses typically owed their status to family connections. But, really, that’s somewhat of a double standard. After all, kings and emperors, too, were most often born into their jobs. It’s not like the king of England had to pass SATs.”

Using example from her own work, as well as that of other current women leaders around the world, Albright said that there is no reason to question women’s ability to govern. In fact, she said it will take the voices and work of all women to address the world’s major injustices.

“I found my voice, and now nobody can make me shut up,” she said.

Albright concluded her remarks with one final piece of advice.

“Look around at the faces of your colleagues, and remember that there is a seat of honor reserved in paradise for any woman who takes the time to help other women, and there is a special place in hell for those who do not,” she said.