Above image credit: Safe in Harm’s Way partnered with the Out of Home Advertising Association of America to create billboards to reach survivors of domestic abuse. (Contributed | Safe in Harm's Way)

In July 2016, Caroline Hammond decided she was going to stop playing it small and start changing the world.

In the beginning of Hammond’s eight-year relationship with the man who would become her abuser, it was all candy and flowers. By the end of their relationship in 2016, he had cut her off from communication with loved ones and was abusing her verbally and physically both in public and in private.

After getting her and her children out of that abusive relationship, Hammond has dedicated herself to helping other survivors of domestic violence through Safe in Harm’s Way.

Safe in Harm’s Way acts as a conduit between survivors and resources. On its website and social media platforms, people can find materials to help identify their abuse, escape their situation and heal from their trauma. Hammond and several members of the Safe in Harm’s Way team are based in Kansas City, but the website and its resources are available to anyone, anywhere.

Despite the resources available to survivors, it is often difficult for them to access help. This is because one of the primary ways that abusers maintain control is through isolation. Due to social distancing and quarantine, many survivors have been trapped at home with their abusers without the reprieve of going to work or school.

This is why Safe in Harm’s Way partnered with the Out of Home Advertising Association of America to find a new way to reach survivors. The two groups launched a billboard campaign over the Valentine’s Day weekend to draw attention to domestic abuse, and help the abused connect with resources to get help. The billboards began in Kansas and Missouri and the campaign has since grown.

The billboards feature a picture of a survivor and a list of words associated with abusive relationships. They don’t look like a lot of other ads for survivors, and Hammond said that was a conscious choice.

“We did a ton of homework, and there’s a lot of great advertising out there around domestic violence awareness,” Hammond said. “All of them include battered women, bruised women. And all that does, based on our knowledge of working with survivors, is allow a person to say, ‘Well, at least I’m not that bad’.”

In their research, the organization found that when many survivors see an ad featuring someone with bruises or a black eye, they quickly disassociate what they’re experiencing from “that kind” of abuse, even if they themselves have bruises.

The hope is that the feelings expressed on the billboards will catch the attention of survivors and pique their interest enough to seek out online resources.

“If you talk to survivors, they will often say, ‘I didn’t know I was being abused’,” Hammond said.

That was her experience for several years. She knew that she was sad, worried and fearful, but she didn’t have the language to recognize signs of abuse other than physical wounds.

The less visible forms of abuse are often isolation and financial control.

According to Hammond, it starts off masked as love and over time will morph into something more insidious.

Arica Roland is director of operations at the Della Gill-Joyce H. Williams Center, a shelter for survivors of domestic violence in Kansas City.

“(Abusers are) monitoring their day to day activities,” Roland said. “ A lot of times it comes in the form of technology where they’re monitoring their social media accounts, or they’re looking at their emails.”

Evidence suggests that the incidence of domestic abuse has increased during the COVID-19 pandemic.

Since the pandemic began, Roland said the center has seen a sharp uptick in the number of survivors in need of help as the abuse worsened in quarantine. The small moments when a survivor’s abuse could be noticed by a teacher or trusted coworker have all but disappeared.

“COVID has reduced their ability to be seen,” Roland said.

This is why Safe in Harm’s Way feels the need for their billboard campaign, and also why they are covert about their social media strategy.

Because abusers often monitor phone and social media use, Safe in Harm’s Way will post something innocuous like a photo with an inspirational quote, and then put resources to get help in the comments section where an abuser is unlikely to catch it.

“We had over a 312% increase in people getting into our site and reaching our content when the pandemic started,” Hammond said.

What to Do if You or Someone You Know Needs Help

One in three women and one in four men have experienced some form of physical violence by an intimate partner. If you or someone you know is included in that statistic, here are a few steps that Hammond suggests.

Telling someone that you are being abused can be very overwhelming, but could also be life saving. She recommends only giving two specific examples of the abuse to not overwhelm your confidante, and to follow up afterwards. Here is a script that Hammond gives survivors who want to tell someone what is happening to them.

“I am really scared right now and I could use your help. Here are two things happening to me. Thank you for listening. Who else do you think could help me with this problem?”

Hammond suggests writing down everything you can about yourself and your abuser and giving the information to a friend. First, middle and last name. Insurance information. The make, model, color and license plate of both cars. Your addresses, your friends and their contact information. Where both of you work and what your hours are. Give them as much information as you can that could be used in an emergency.

Come up with a code with your trusted friend that can signal if you’re alright or if you need help. Hammond gave an example using music. If she texts someone that she’s listening to a song from a particular decade and they say that they’ve been listening to a song from that same decade, they’re alright. If they say they’ve been listening to something older, they need help. If they go back two decades, it’s time to call the police immediately. Here’s an example from the point of view of a survivor who needs someone to call the police for them: 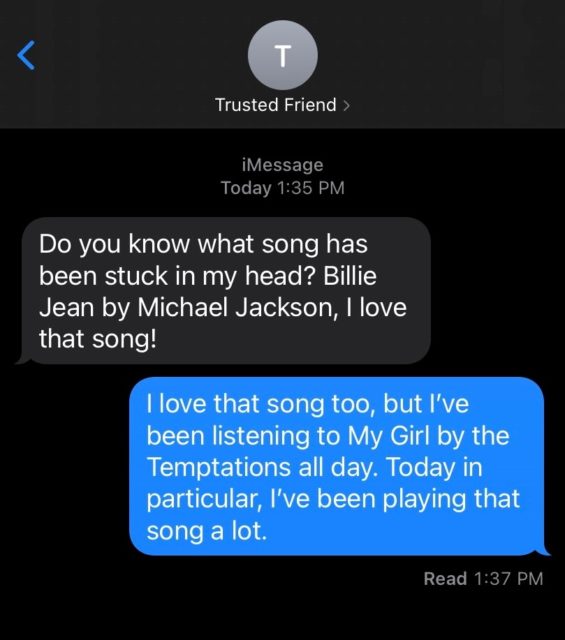 Coded texts are one way for the abused to seek help from friends or family members.

When Hammond realized it was time to get help, she reached out to a local shelter that was able to give her the full gamut of resources from the language to describe what was happening to the legal help she needed to establish independence.

Though Safe in Harm’s Way lives online, they can connect survivors to resources in their area. If you live in Kansas City, you can call KCPD’s domestic violence hotline at 816-HOTLINE or 816-468-5463. They answer the phone 24/7 and will provide free information on housing, financial aid, medical aid, counseling services and shelters.

'God created each of us with a specific purpose.’

Igniting a conversation, on domestic violence