Chasing the Tortoise and the Hare 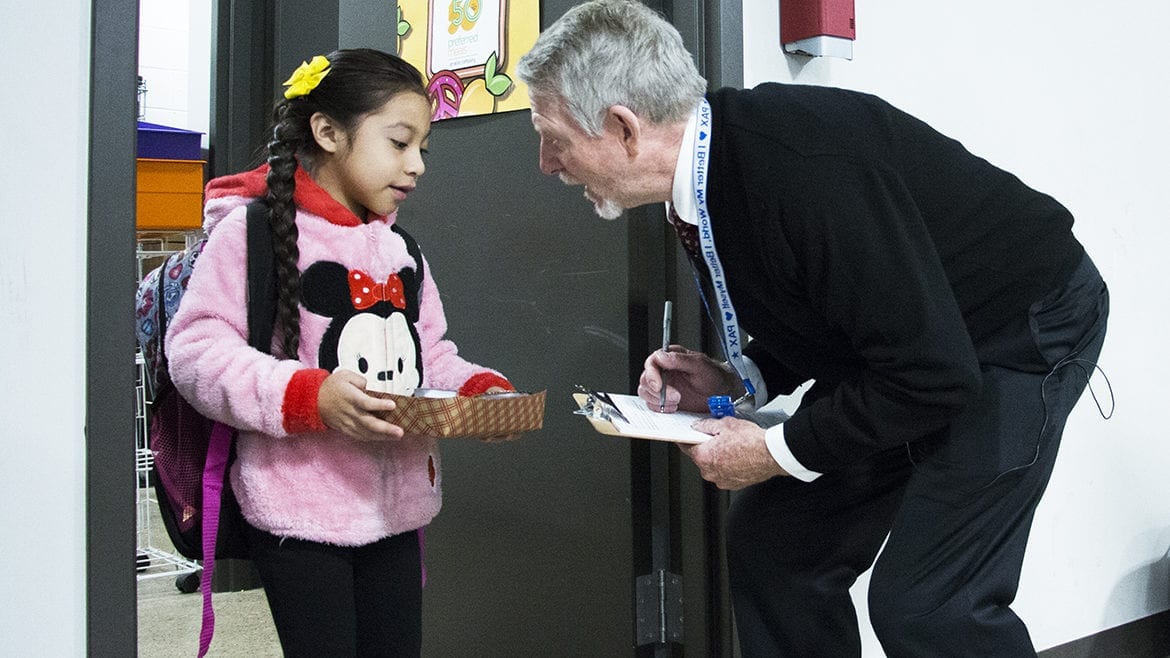 COLUMBUS, Ohio—Before dawn, dozens of youngsters rush through winter rain toward the entryway of their school.

The elementary school students are heading from buses into Columbus Bilingual Academy, which caters to Hispanic families that speak little or no English. The academy is a haven for students who might have been bullied, isolated or simply bewildered elsewhere, Principal Paul Preston said.

“What if you had to take an IQ test, or any test, an entrance test, in a language that you did not understand?” he said. “You would not do so well.”

Beyond its specialized mission, Columbus Bilingual stands out for another reason: It’s located in a strip mall about 20 minutes north of downtown. Other tenants include include Big Lots, African Euphoria Braids and Pawn into Cash.

Here's How We Chose Columbus For This Project

Comparing Apples to OhioWhy Columbus? Why would Kansas City PBS use Ohio’s capital city as a school-choice benchmark for our community? It all came down to research. More specifically, it was two reports: the “Education Choice and Competition Index,” published a year ago…

In a former life, this unconventional location would have even raised questions for Preston. He used to regulate these types of schools as an official with the Ohio Department of Education.

“I’d go out and review community schools, and I was just thinking, ‘In a shopping mall?’ and it’s just like, ‘How can they do education there?’ Preston said. “But my paradigm started to be broken up quickly once I saw what was going on in the classrooms.”

It is hard to know if there are converts like Preston in Kansas City, but there are like-minded people here  — along with those who hold opposite views. As a state that has aggressively pursued school choice, Ohio serves as a useful measuring stick for the system we have here.

But, perhaps, the most helpful observation out of Ohio came from a community school principal who hearkened back to the original motivation for school choice.

Community schools are Ohio’s version of what are known more generally around the country as charter schools, which are publicly funded but operate outside many state regulations to encourage innovation.

Ohio first authorized community schools two decades ago, becoming an early adopter in a movement that also includes Missouri and Kansas. Ohio now has approximately 340 charter schools, compared with fewer than a dozen in Kansas and about 40 in Missouri.

Teachers unions generally dislike charter schools, in part, because they are often exempted from collective bargaining regulations. Ohio is no different in that respect.

“I think parents have the right to make choices for their children,” argued Tracey Johnson, president of the Columbus Education Association. “If that choice means that the traditional public school loses out, to me, that’s not a good choice.”

Too often, Johnson said, students are performing below grade level when they return to Columbus City Schools from charters. Sometimes their credits won’t transfer either.

According to a calculation by Innovation Ohio, a public policy think tank, Ohio school districts lose an average of about $8,000 in state funding that follows a student out of a traditional public school.

Choice critics say districts have to tap local property tax revenue to keep the remaining students whole. The reason for that, they say, is that the transfer formula does not account for the higher operating costs in districts, which unlike charters, for instance, must provide bus service.

On the flip side, they argue that community schools have lower operating costs because they are exempt from about 250 state regulations.

This is an ironic situation, said Scott DiMauro, vice president of the Ohio Education Association.

Judging by their grades on the state report card, these are all substandard schools. None of them earned above a C in any of the six categories, which measure things like K-3 literacy and performance on state tests. Franklinton and Oakstone failed in some categories.

The school leaders own up to those marks, but they also echo Preston’s comments about standing out by offering a safe, stable environment.

Franklinton Prep serves students in ninth through 12th grade and is in a neighborhood that ranks 38th out of 39 Columbus neighborhoods for median income. Griffith said the students who come to him do so because it’s “the last best option for them.”

Getting the students back on track in no small feat, Griffith said, in part because many of them have either moved often or scraped by at their traditional neighborhood school. It’s not uncommon, he said, for him to receive a freshman that is a fourth-grader academically.

School district advocates criticize charters for applying a double standard: justifying their existence by saying traditional schools are failing hard-to-serve kids, and then excusing their own poor performance by saying they are dealing with a tough population.

At Oakstone, the special population is children with autism.

Kronewetter said Oakstone Community is one of three schools in the state with its entire student population on an Individualized Education Program, the federally required plan for students who receive special education services.

She and her team are working with their sponsor and local legislators to find ways to alternatively measure student success so it isn’t based on state assessments alone.

For years, Ohio was known for a choice system that appeared to favor quantity over quality. Its charter system has been plagued from the outset with allegations that operators were in it for financial gain, with little oversight by sponsors or the state.

But people on all sides of the charter school debate hailed the passage of reform legislation three years ago. The measure, HB 2, added accountability and transparency measures throughout the charter school system, including requiring the state Department of Education to evaluate and assign an overall rating to charter school sponsors.

Griffith said the measure might have gone too far by stifling innovation as legislators set about removing bad actors from the system. But he generally agreed with Kronewetter, who said she could deal with the additional scrutiny.

Dan Good was superintendent of Columbus City Schools until retiring late last year. He didn’t begrudge parents for seeking charter options because they seemed to be safer for their children.

But, he said, moving does not necessarily solve larger problems, and charters can exacerbate education problems caused by students moving around a lot.

“I think families oftentimes are in situations, whether they be because of a domestic issue, because of their economics, that they’ll look to a different provider as maybe the panacea, when these are really greater social issues,” Good said.

For Johnson, the Columbus Education Association president, situations like that argue for making schools the hub of the community where physical, social, emotional and mental needs are able to be addressed.

“That’s where the resources and money should be spent, not necessarily on all of these choices,” she said, “because unfortunately in Ohio, you have all these choices, and it hasn’t made a difference. In a lot of cases, it’s made a negative impact versus a positive impact.”

Yet Griffith, of Franklinton Prep, had a different take. The two sides don’t necessarily have to be at loggerheads.

“I would like to invite and have folks reconsider that initial motivation for charter schools,” he said, “which is, ‘We’re in this together. What are you doing that’s working with students like this?’”