The Importance of Engaging Beyond Your Usual Circle 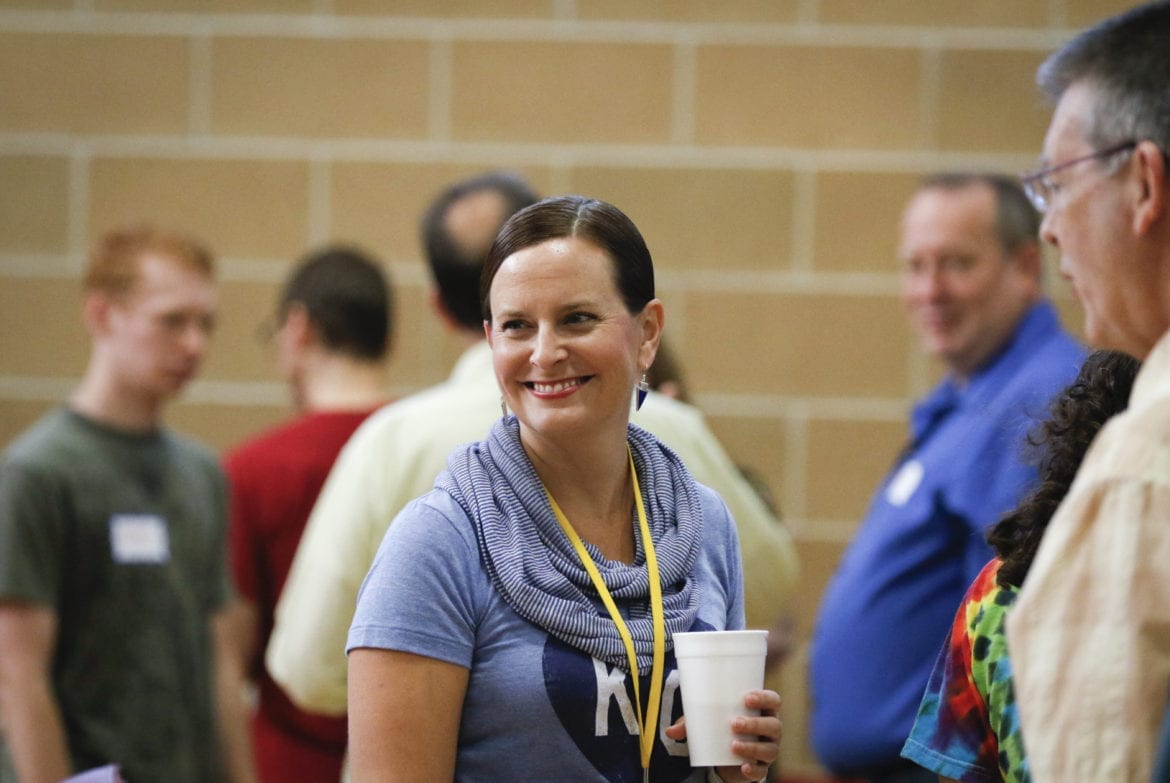 Helen Stinger, founder and director of Kansas City Oasis, launched the fellowship to provide her, her family and others with multigenerational support outside the bounds of religious faith. (Jeff Tuttle | KLC)
Share this story

When Kansas City Oasis, a nonreligious fellowship, first partnered with a religious organization to serve meals to the needy, some Oasis members expressed concern that their secular group could become fractured.

Would the separate factions find shared connections? Would they breach one another’s beliefs or boundaries?

These days that concern is hard to remember.

The religious group – Micah Ministry – and KC Oasis are partners. Members from both groups happily stand alongside one another to serve dinner every Monday to more than 500 needy Kansas Citians. Micah Ministry, an ecumenical outreach effort to the urban poor out of Independence Boulevard Christian Church in Kansas City, Missouri, has been invited to speak twice at Oasis’ secular Sunday gatherings. This is the first installment of a six-part series that will run on Flatland Thursdays through March 9. The stories are reprinted with the permission of the Wichita-based Kansas Leadership Center, which published them in the January “Healing Divides” issue of The Journal, its quarterly magazine. KLC is a nonpartisan education nonprofit that works to foster stronger leadership in communities throughout the state.

The partnership is testament to the leadership skill of engaging with unusual voices, an important aspect of being able to energize others through leadership. The religious and nonreligious can often represent unusual – even discordant – voices to each other. By connecting around a shared goal of improving the community, they have found ways to work together despite their very different beliefs.

Sharon S. Cantrell, a pastor and social worker who helps coordinate Micah Ministry, says the program is another way for their pastor, the Rev. Lee Chiaramonte, to fulfill their mission.

On a recent night, volunteers came from a Catholic and a public school. There were also volunteers from American Sign Language and kindness clubs. A woman wearing a hijab worked alongside Jewish and atheist volunteers. There is no litmus test for volunteering, Cantrell says, just as there is no test for the homeless who come to eat. For Cantrell, the work allows her to practice the gospel. For atheists, they are acting out their humanity, she says.

“We all have the same goal, and that’s to treat others with respect and dignity,” she says. KC Oasis distinguishes itself as an alternative to faith-based communities. It’s not an activist group and accepts those who identify as religious, too. The group offers a multigenerational network for those who are nonreligious or don’t fit in a traditional church.

The civic commitment is especially important, Stringer believes, because so-called religious “nones” – those who identify as atheist, agnostic or with no religious group – account for 23 percent of the U.S. adult population, according to the Pew Research Center’s 2014 Religious Landscape Study. The center found that more than a third of those “nones” are millennials.

“We wanted to provide the same benefits that a lot of people get out of religious communities, and there really isn’t any other way to find it unless you want to go to religious communities,” Stringer says. “Religion kind of holds the monopoly on multigenerational support and connection.”

Church Without the Dogma

It’s part of the reason Stringer helped form Oasis. The Kansas City Atheist Coalition had been around for a long time and served a vital purpose to connect the community, too. But Stringer wanted something more.

Stringer, a wife and mother, wanted a place for her family to bond and form regular connections. She wanted to volunteer with a group to make the community a better place. She found a model group and used that to form KC Oasis. The group has evolved into a community with a strong focus on civic engagement. It’s such a high priority for Oasis that it meets every Sunday morning and invites nonprofit agencies and others to talk about their civic work.

It’s not unusual for members – the community averages an attendance of 200 to 250 people each week – to get involved after hearing a speaker. Oasis also has a weekly mobile blood bank set up outside so members can donate.

Stringer has also created an international network called Oasis Network to help guide others in cities across the country.

“Our goal is to figure out how we can live the best life we can and give back as much as we can now that we’ve decided religion isn’t a good fit for us anymore or it was never a good fit,” she says.

The group touts itself as a place for “agnostics, humanists, skeptics, atheists, freethinkers, deists, questioning theists and the like.”

Micah Ministry is one outlet for giving back. A volunteer coordinator also helps Oasis members connect with agencies that include, among others, The Whole Person, which assists people with disabilities.

Stringer believes that the group’s members are stronger together as a community. “When you have an entire group of people who are passionate about something, you can really effect change in the world,” she says. “We’re creating a space for that kind of opportunity to develop.”

Stringer points out that Oasis is not anti-religious. The group touts itself as a place for “agnostics, humanists, skeptics, atheists, freethinkers, deists, questioning theists and the like.”

“I think for so long we’ve been dividing ourselves rather than finding what we have in common, and working together toward a common good is so much more powerful and effective than just building walls and isolating ourselves,” Stringer says.

The work is a way to give back but also dispel myths and stigmas about what it means to be an atheist. It also allows atheists to feel more comfortable coming out in their community, philanthropies or jobs.

Hyde says atheists face a lot of misconceptions including that “atheists are just selfish people who disagree with God because they want to be able to sin.” That one still surprises him, but he doesn’t let it bother him.

The work with Micah Ministry began after another religious group turned away the coalition from serving a holiday dinner after a history of working together cooperatively. Chiaramonte heard about it and recruited them to help at Micah Ministry. It initially raised a few eyebrows at Micah Ministry, too, Cantrell says.

“We had one guy who came to us and said, ‘I’m not going to be able to eat. The atheists are serving.’ I said, ‘Well, we’ll miss you,’” Cantrell says.

He’s since returned, she says.

The partnership is strong, Hyde says, because of their ability to set aside differences and focus on their goals.

“We spend so much time around Micah Ministries and people who are glad to have us and don’t really care if we believe in God,” he says.

—Dawn Bormann Novascone is a freelance journalist based in Kansas City who spent 15 years covering news at The Kansas City Star.