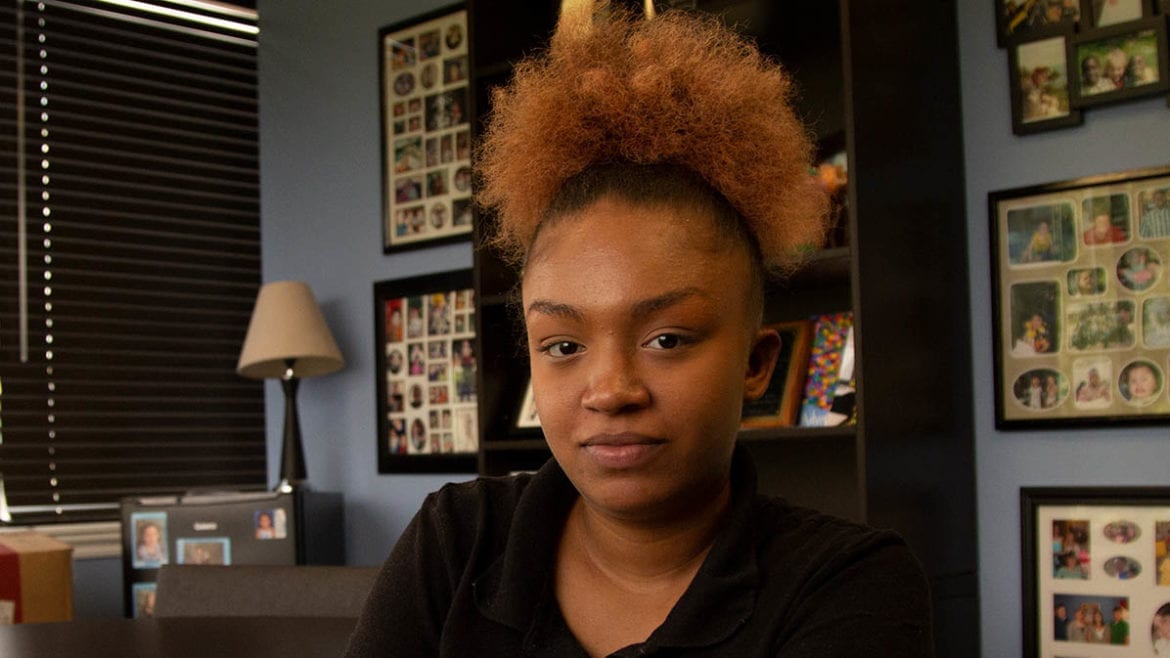 Kierra Kinton, 21, is working to better her life after becoming a teen mom while in the Missouri foster care system. (Meg Vatterott | Flatland)
Share this story

Her grandmother sought help through a handful of behavioral health organizations, including Crittenton Children’s Center and Synergy Services, both of which are in the Kansas City area. After Kinton’s time in those programs, her grandmother placed her in state custody.

From age 13 to 18 she lived in nine different institutions, six during one two-year period. She got accustomed to living in these places but didn’t like having to stay in a room all day with just a few breaks for different activities.

Sex, pregnancy and foster careAccording to the U.S. Centers for Disease Control and Prevention, teen pregnancy costs taxpayers more than $9 billion a year in health care and other costs. Ironically enough, those other costs include foster care. The irony lies with the fact…

When she was 16, living in a Pathways Behavioral Health site in Waynesville, Missouri, she got pregnant, even though she was on birth control. A woman who worked there took her in, but it didn’t last. Shortly after having her baby, she moved to another group home. Here they wouldn’t let her work (even though she wanted to) but provided everything she and her baby needed.

Another woman took her in for a short period, and then she moved to two more shelters.

The only money she had was what she got from the state, and she was tired of moving around with her young daughter. When she was referred to FosterAdopt Connect by her state social worker at 19, she had just been asked to leave the apartment she was living in. The organization helped her get into a hotel for a couple of weeks until she found another apartment.

While she went to classes to get her GED during the day and worked at night, her aunt watched her daughter. She took the bus because she didn’t have a driver’s license. After a period of not getting any sleep and trying to do it all without a support system, she quit school.

She now lives in an apartment and works full time. Kandice Jackson, Kinton’s community connections specialist at FosterAdopt Connect, said that the program would like to move Kinton to a better apartment but that it’s always difficult to find a nice place that will take a housing voucher.

Jackson has helped Kinton try to retain some stability during the past two years in the program, but it’s been a challenge. And now, at 21, Kinton has a newborn and is trying to find an evening GED program.

“She is a good parent,” Jackson said. “Her 5-year-old is older than a kid her age should be because she has to move around so much. It’s hard for her to find support, but she got her kids back in day care. She makes do.”

How Can You Help Foster Care Families? curiousKC Has Some Answers

When Bryan Stalder and his wife adopted their niece and nephew in 2012, they realized the difficulties of working through the foster care system.

“(It) has really opened our eyes to an area of society that is really in need of good people to step up and help out,” Stalder said. “I believe more folks would help if they knew how to do it.”

Stadler decided to ask curiousKC, “How many different ways can folks mentor youth and assist foster families in the metro?” We convened a Facebook Live panel to look into the question.

Transportation is often a huge obstacle for those transitioning out of foster care, so donating a used vehicle or even gas cards could make a huge difference, said Allison Hilton, manager of the Transitional Living Program at Synergy Services, Inc.

“If you (age out) at 18 or 21 and you don’t have any credit, or maybe a family member messed up your credit, it’s really difficult for these young people to get cars,” Hilton said.

The panel also discussed the value of volunteering with organizations that serve children and families in the foster care, and sharing your expertise, or just being a caring, consistent adult.

“Almost everyone I spoke with said that these kid need one person in their lives who is stable,” said Flatland contributor Tammy Worth, who has been reporting on what happens to youth when they age out of the foster care system.

Watch the full discussion in the video below.

Curious Kansas Citian Bryan asked: How many different ways can folks mentor youth and assist foster families in the metro? And today, on our #curiousKC Facebook Live series, we’re here to discuss…

Looking To Help? Here Are Some Options

CASA – Provides mentors and advocacy for children in the court and foster system.

Youthrive – Engages the community to help children aging out of the system.

Cornerstones of Care – A children’s health and safety organization where volunteers can donate time, money or items like birthday gifts for foster youth.

CarePortal – A website and online community where child welfare professionals can post requests for needed items or support, and churches can sign-up to help in real time.

A Child’s Hope – A program through the Church of the Resurrection that offers a range of opportunities including mentoring and workshops for foster families.

FosterAdopt Connect – helps foster children and families in Eastern Jackson County in a variety of ways including through school supply drives.

Synergy Services – There are a wide range of ways to assist this organization that supports individuals and families in crisis including fundraising, meal preparation and mentorship. They will also take donations including items like gas cards, cleaning supplies and household items.See a full list of needed items here.

Crittenton Children’s Center  – Provides foster and adoption services in Jackson County. It also has a mentorship program where volunteers work with at-risk youth at the center. It also takes donations of supplies ranging from mattresses to clothing and school supplies for foster and adoptive families.

—This story has been updated to include an additional organization that helps foster youth.