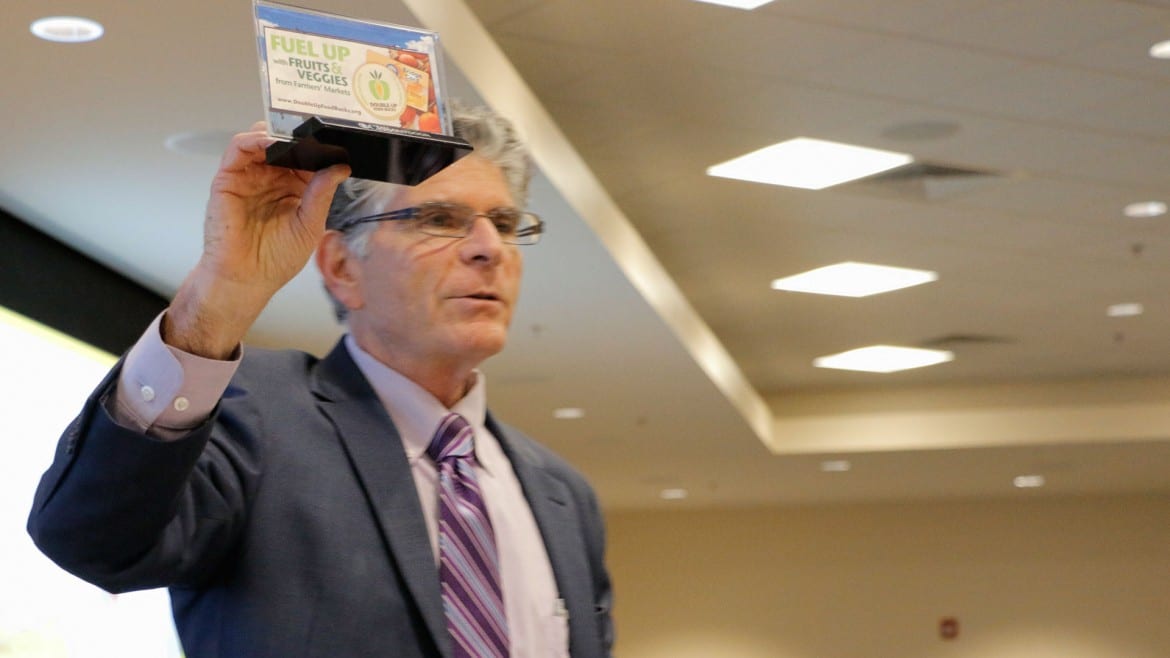 Oran Hesterman, CEO of the Fair Food Network in Ann Arbor, Mich., held up a miniature replica of a billboard his organization had throughout Detroit advertising its Double Up Food Bucks program for food stamp recipients. Hesterman was in Kansas City, Kan., on Thursday for a food summit.
Share this story

His point was to illustrate that solving hunger isn’t as simple as merely providing someone something to eat — especially when health is thrown into the mix.

The CEO of Episcopal Community Services in Kansas City, Mo., a network of anti-hunger ministries on both sides of the state line in the metropolitan area, Hornbeck said one can of green beans contained nearly the full daily allowance of sodium for someone with hypertension. The other was a more expensive, low-sodium variety that’s not often found in food pantries serving the poor.

“It is no longer as simple as saying the way to end hunger is to put food in front of hungry people,” he said. “Providing the right food, in the right quantities, at the right time, at the right place, and even in the right way, requires powerful collaboration and the solution is not as easy as it might seem.”

The keynote speaker was Oran Hesterman, CEO of the Fair Food Network in Ann Arbor, Mich.

There are not too many other places around the country, he said, where healthy food initiatives have such strong backing from local government.

“There is an energy here in Kansas City,” he said. “The biggest challenge (from the summit) is not to let this be a one-time thing.”

The summit grew out of an initiative the Unified Government of Wyandotte County/Kansas City, Kan., launched five years ago when Wyandotte County came in last in a health ranking of all counties in the state.

Leaders have dubbed the initiative Healthy Communities Wyandotte. Members of the initiative’s Nutrition Action Team helped organize the summit along with Mark Holland, mayor and CEO of the Unified Government.

Breakout sessions included discussions around increasing physical access to healthy food and creating a culture of health within the workplace. Hornbeck participated in a session on making nutritious foods more affordable and accessible to low-income households.

The session included presentations from representatives of organizations working to reduce hunger and improve nutrition among low-income families.

For instance, Rob Reiman outlined the work of The Giving Grove, an affiliate of Kansas City Community Gardens, which assists low-income households and community groups to establish gardens in their neighborhoods.

Reiman is executive director of The Giving Grove, which provides fruit trees for neighborhood plots. The core varieties are apple, pear, and Asian pear, along with blackberries and raspberries.

Once it matures within five to six years, Reiman said, an apple tree can produce as much as 500 pounds of fruit each year. He said a 3,000-square-foot plot is big enough to have 15 trees.

The Giving Grove began a year ago, and it now has 38 sites. The five-year plan calls for having nearly 300 sites.

“We can be a game-changer if we do it right,” Reiman said.

Kelly was pleased to have significant participation from the business community.

In her breakout session, Kelly said, attendees looked at different neighborhoods and tried to identify ways to bring healthy foods into those communities.

Her group analyzed the northeast part of the city, Kelly said, and they thought it might work to partner with Dollar General to host some fruit and vegetable stalls in its parking lot.

The common theme among the groups in that session, she said, was to leverage existing assets in the community.

One of the attendees was Joe Steineger, 80, a former mayor of Kansas City, Kan. He still farms about 700 acres around Wyandotte County, and he has a seven-acre garden at his home, where he said he grows everything from asparagus to zucchini.

He sells produce at a couple farmer’s markets.

He expressed confidence that the summit will spur action.

“It’s amazing what we could do and what the need is,” Steineger said. “No matter what we do, it will be hard to fill the need.”