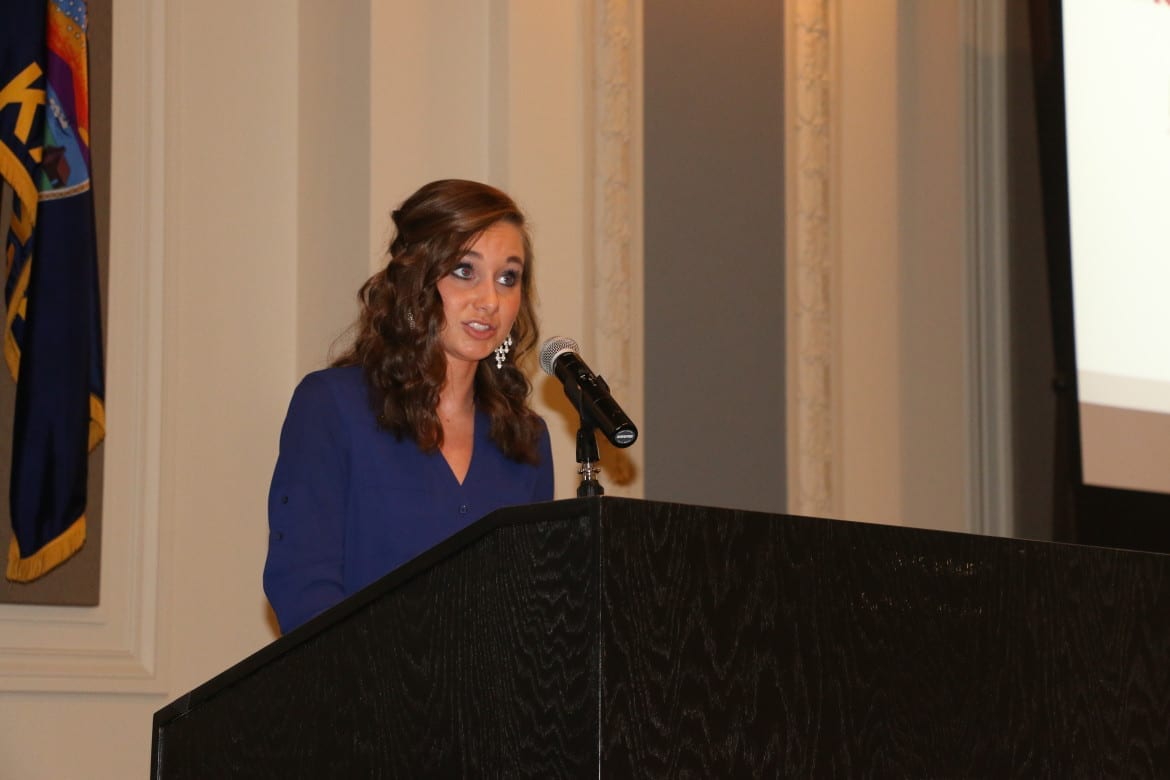 Jordan Elder, 17, a senior at Park Hill High School, was among speakers Thursday who endorsed a local effort to prohibit the sale of cigarettes to people under the age of 21. (Photo: Mike Sherry | Flatland)
Share this story

Business and health leaders on Thursday announced an ambitious initiative to convince elected officials in the dozens of municipalities throughout the Kansas City area to raise the legal age for buying cigarettes from 18 to 21.

Spearheaded by the Greater Kansas City Chamber of Commerce and Blue Cross and Blue Shield of Kansas City, “Tobacco 21 | KC” aims to build on a movement that now counts nearly 100 communities around the country and the state of Hawaii that have made 21 the legal age for purchasing tobacco products.

“This is our time to make a choice that is different for our children,” said Dr. Bridget McCandless, CEO of the Health Care Foundation of Greater Kansas City and a leader of Healthy KC, the collaboration between the Chamber and Blue Cross.

Chamber leaders said they had no timetable for achieving their goal but were encouraged by initial conversations with local elected officials.

A legislative committee of the Unified Government of Wyandotte County/Kansas City, Kansas, on Monday is scheduled to consider an ordinance raising the tobacco age to 21. If approved, it will likely go before the full commission next month.

Preventing kids from starting to smoke is one of the best ways to keep them from picking up the habit as adults. The Institute of Medicine, in a March 2015 report, said that among adults who become daily smokers, approximately 90 percent say they first smoked before they reached the age of 19 and nearly 100 percent before the age of 26.

“It is one of the most effective ways to prevent kids from starting a noxious habit that can end in their early death,” Chamber CEO Jim Heeter said.

The Health Care Foundation cited Needham, Massachusetts, as an example of what can happen when a community increases the legal age for buying cigarettes.

Hall said the aim is not to criminalize purchases if people are caught buying cigarettes under age. Rather, he said, the idea is for municipalities to use a productive approach like sending offenders to a smoking cessation program.

In Missouri, at least, convenience store operators have been a powerful force in stymieing an increase in the cigarette tax, another way health advocates have tried to dissuade people from smoking. They say teens are especially price-sensitive.

The convenience store lobby sought to dissuade the Columbia City Council from raising the tobacco age to 21 last year, said Ginny Chadwick, the former city councilwoman who sponsored the ordinance. The ordinance, however, passed on a 6-1 vote, she said.

Chadwick is a health instructor at the University of Missouri – Columbia, where she said students had accepted the change.

“It is part of our normal life now,” she said.

Also at the chamber Thursday was Jordan Elder, 17, a senior at Park Hill High School and co-chair of Youth With Vision, a prevention-focused organization comprised of high school leaders from Platte, Clay and Ray counties in Missouri.

“I recognize the importance of making the right choices, and I know other young people stand with me in this effort,” Elder said. “Tobacco 21 has the ability to help my peers make these good choices, choices that form healthy habits that last a lifetime.”