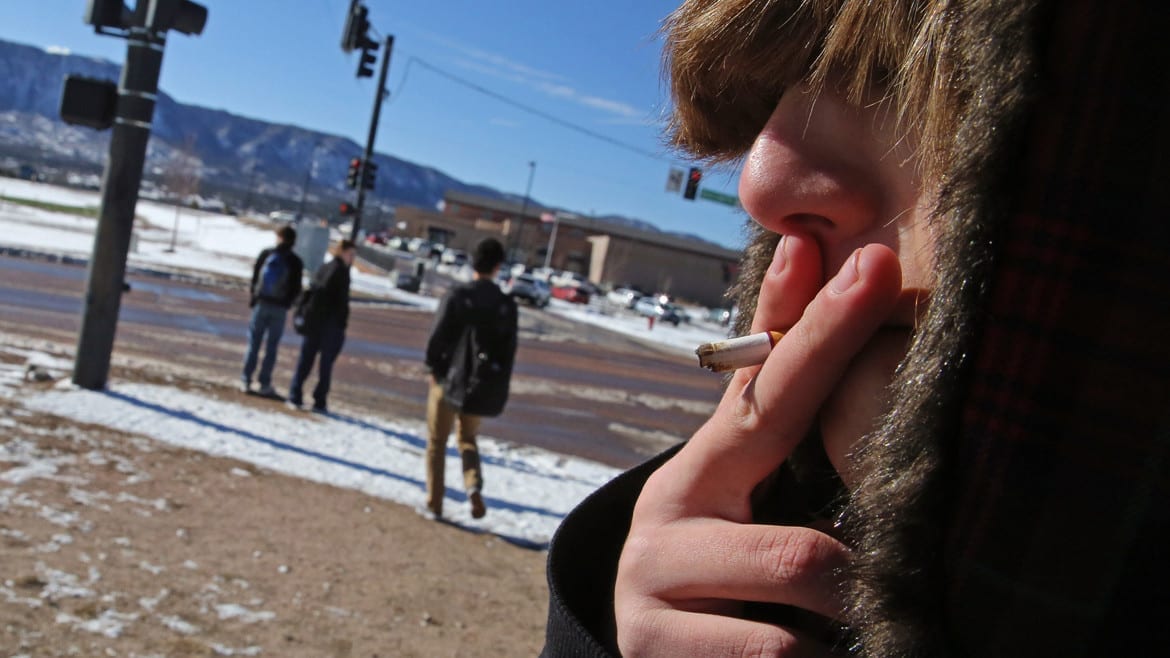 High school students, like the one above, would be prohibited from purchasing cigarettes under proposed ordinances in Kansas City and Wyandotte County. (Photo: Brennan Linsley | AP)
Share this story

Taken together, the three ordinances raise the legal age for purchasing tobacco products and e-cigarettes from 18 to 21 and add e-cigarettes, also known as vapes, to the city’s ban on indoor smoking, including in so-called vape shops that sell them.

Supporters expect the full council to follow the committee’s lead when it meets Thursday afternoon, given that nine of the 13 council members are co-sponsors of the three ordinances.

The council vote could be the first of a one-two punch, since elected officials in Wyandotte County are scheduled to consider raising the legal age of sale of tobacco products to 21 when they meet Thursday evening.

“I feel for the folks on both sides of this,” Kansas City Councilwoman Heather Hall said, explaining that her support for the measures come from her experiences as a staff member with the American Cancer Society.

Proponents argue that keeping cigarettes out of the hands of youngsters for as long as possible pays health dividends far down the road. They cite research showing that nearly 90 percent of smokers picked up the habit by age 20 and that the still-developing brain of young adults is particularly vulnerable to tobacco addiction.

Vapes are even finding their way into classrooms, according to testimony Wednesday, since unwitting teachers can easily mistake them for pens. Students can take a drag when the teacher is not looking.

But Doug Cox, owner of a midtown vape shop, told committee members that it was ignorant to lump in e-cigarettes with traditional cigarettes, especially when it comes to clean indoor air ordinances. Vapes merely emit water vapor, he said.

“Uneducated votes are going to doom our country,” Cox said after the committee meeting.

He said the indoor smoking ban would prohibit customers from sampling vapes in his store.

Like Cox, Candi McCann argued that vapes are a great smoking cessation tool, providing a less harmful way to deliver nicotine. McCann is a regional manager for Vapor World, which has four stores in the area.

Including vapes in the ordinances, she said, infringes on the right of adults to engage in a legal activity and of business owners to control what goes on in their establishments.

Curt Diebel, owner of Diebel’s Sportsmens Gallery on the Country Club Plaza, unsuccessfully urged the committee to exempt high-end cigars from the prohibition on selling tobacco products to people under the age of 21.

More often than not, he said, his customers are coming in to mark a special occasion – including celebrating that they can buy a cigar on their 18th birthday.

Cigars and cigarettes are not comparable items, Diebel said, arguing that they use different types of tobacco.

“It is just a different product,” he said. “It is not the same.”

But Dr. Bridget McCandless, CEO of the Health Care Foundation of Greater Kansas City, told the committee that while they might be different from cigarettes, cigars carry an exceptionally high risk for oropharyngeal cancer.

She also disagreed with the contention that vapes are smoking-cessation devices, arguing that evidence suggests e-cigarettes are gateways to cigarettes for youngsters.

McCandless appeared before the committee as a leader of the Tobacco 21 | KC initiative, launched last month to make 21 the legal age of sale of tobacco products in municipalities around the region. The initiative is part of Healthy KC, a broader community-health effort spearheaded in part by the Greater Kansas City Chamber of Commerce.

Leaders of Tobacco 21 have been active in coordinating what could be back-to-back favorable votes in Kansas City and Wyandotte County on Thursday. A legislative committee in Wyandotte County has already approved the ordinance.

The proposed Tobacco 21 ordinances in Kansas City, Missouri and Wyandotte County both include fines for violations. The Kansas City ordinance says violators could face a fine of up to $1,000 and imprisonment for as long as six months.

Kansas City’s Tobacco 21 initiative is part of a nationwide effort pushed by the Ohio-based Preventing Tobacco Addiction Foundation. Its founder and president is Dr. Rob Crane, a family physician and professor at Ohio State University.

The foundation says more than 100 municipalities nationwide have increased the legal age of sale of tobacco products to 21, including New York. Hawaii has a statewide enactment.

The majority of communities that have taken action are in Massachusetts and New Jersey.

Having two large municipalities enact the ordinance nearly simultaneously would be a first for Tobacco 21, Crane said in an interview. It would be significant in helping the movement gain a greater foothold in the Midwest, he said.

The Kansas City-area initiative is also notable for the leadership of the business community, Crane said.

Actions to curb smoking are more likely to be effective on the local level, he said, arguing that the tobacco lobby has widespread influence in state legislatures around the country.

“You have to go to your neighbors. You have to go to the city council person who lives down the street from you, who are in the PTA with you,” Crane said. “They listen and they understand.”