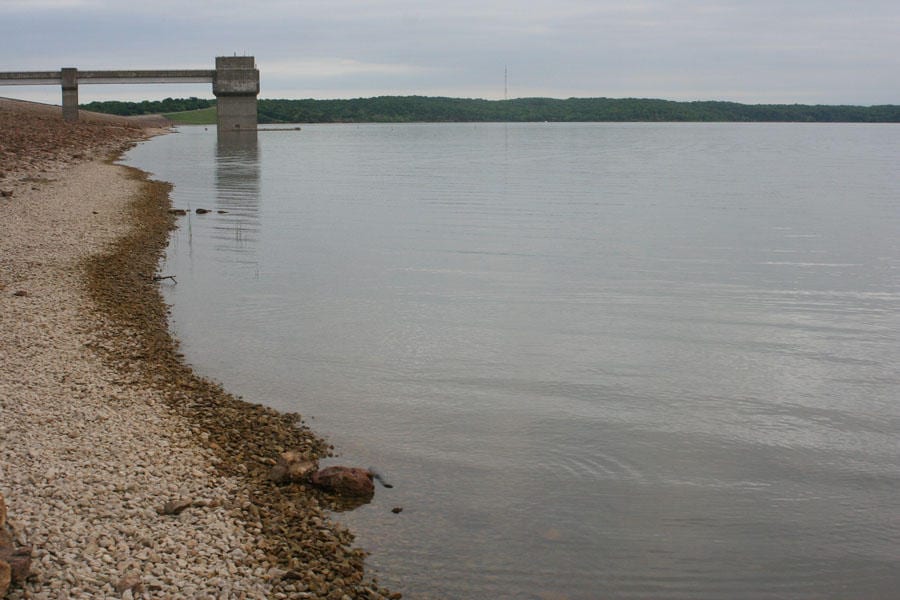 Securing Kansas’ water supply — once a hot topic of the legislative session — has faded into the background in Topeka amid pounding rains and a grinding budget crisis.

Rep. Tom Sloan, a Republican from Lawrence, led weeks of hearings on water issues earlier in the session as chairman of the House Vision 2020 Committee. But, sitting in his office between largely unproductive recent House floor sessions, Sloan said the concerns raised during those hearings largely have been forgotten.

“I don’t think anyone is paying attention right now to water,” Sloan said.

Gov. Sam Brownback has helped bring the state’s water issues into prominence by proposing a 50-year plan to sustain the Kansas water supply.

At a bill-signing event last week, Brownback said it’s important to keep that goal in the public consciousness, even as recent rains break the long-term drought in much of the state.

“We’ve got to continue to focus on water,” he said. “Right now we’re great — we’ve got a lot of water coming into the state, and I’m delighted about it. My dad’s standing on his ear  ’cause he can’t get his beans planted, it’s been so wet. But we’re finally getting rain.”

Brownback said that while flooding is the short-term concern, water conservation should be the long-term focus.

The Kansas Water Authority met recently to accept conservation plans from various regions that all draw from the Ogallala aquifer, he said.

Much of the governor’s 50-year plan focuses on the Ogallala, the fast-depleting underground resource that is used to irrigate most crops in the western half of the state.

But Sloan’s committee turned its attention to the sedimentation of surface waters in lakes and reservoirs. The rains that have inundated most of the state, he said, will only make that worse.

“Sediment flows under high water events,” Sloan said, “so we probably have a lot of sediment going into our lakes and reservoirs, which will compound our problems later on for water quality as well as quantity and storage.”

The population centers of eastern Kansas rely heavily on reservoirs for their water supply. When those manmade lakes fill with sand and silt, they hold less water. That becomes a factor the next time there’s a drought.

“We need to be making long-term analysis and decisions and investments,” Sloan said. “Too many people — legislators and others — look at it and say, ‘Things are fine now. The drought has broken.’”

Sloan said even with 8 inches of rain in May, some of the ponds on his Douglas County farm have not fully recovered from the drought — and other parts of the state have received far less rain.

The reservoir maintenance projects are traditionally paid for through a three-pronged fund made up of state money, municipal water fees and agricultural water fees. But the state has not contributed its third in years, depleting the capacity to do the needed maintenance.

Sloan proposed a bill to make up the difference by increasing the municipal water fee, but it ran into opposition from several groups and went nowhere.

Part of Brownback’s 50-year plan calls for the creation of a task force to examine possible funding sources. His administration decided to delay appointments to that task force until after the session to give legislators a chance to participate. But the session continues to drag on, and sediment continues to flow into the state’s reservoirs.

Sloan said he understands that taxes and budget have to be the Legislature’s priority now. But he said the short-term budget crisis is crowding out lawmakers’ ability to think long-term on issues like water.

“Even more than education or taxes, water is going to determine who lives in Kansas and whether you can make a living here,” he said.

What's In Our Tap Water?

You Asked and We Took a Dip

Testing the Water in Our Watershed

Our Watershed | A History of Brush Creek

Watching Our Water | Cities Cope with Polluted Ag Runoff, Create Their Own Pollution, Too