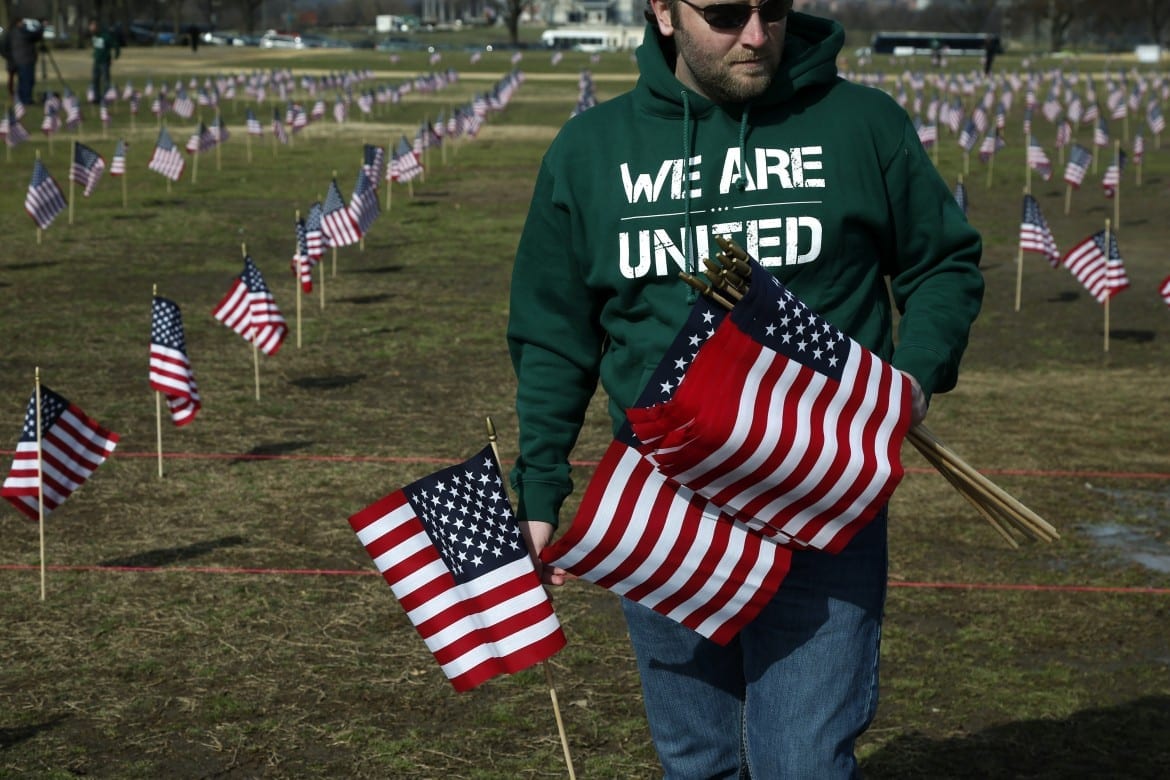 Army veteran Michael Blazer from Lebanon, Tenn., now with Iraq and Afghanistan Veterans of America (IAVA), joins others to place 1,892 flags representing veteran and service members who have died by suicide to date in 2014, Thursday, March 27, 2014, on the National Mall in Washington. (Photo: AP/Charles Dharapak)
Share this story

Two Kansas soldiers treated for post-traumatic stress disorder after serving in the recent wars in Iraq and Afghanistan say a bill signed this week by President Barack Obama is a good start in preventing veterans’ suicides.

The Clay Hunt SAV Act, signed into law Thursday, is named for a Texas Marine Corps veteran who took his life after returning from Afghanistan with PTSD.

The bill requires annual independent audits of the U.S. Department of Veterans Affairs mental health system and creates peer support groups and a loan repayment program for psychiatry students who choose to work in the VA system.

Brandon Garrison, a U.S. Army veteran from Leavenworth treated for PTSD after serving multiple deployments in Afghanistan, says the bill provides much-needed oversight for a system in which the auditing has been done internally.

“It takes that responsibility and puts it into someone else’s hands so you don’t have this big cover-up within the VA,” he says.

Garrison says he got to know some of Hunt’s family while he worked with Team Rubicon, a disaster relief nonprofit founded by Marine veterans. He says the legislation is a fitting tribute.

“I think it’s going to save lives. I really do,” Garrison says.

But he laments how long it took for VA mental health reforms to be enacted when an average of more than 20 veterans a day commit suicide in the United States.

Will Stucker, an Army veteran from Kansas who was wounded in Iraq, echoes those sentiments.

“I am glad that the vets today are going to be getting better treatment, but what about those of us that are still being ignored?” asks Stucker, who had served 10 years when he was hurt in 2005. He was deemed too injured to return to the fight but not injured enough to receive military medical retirement, and has since unsuccessfully petitioned for it several times.

He says he saw parallels in the story of Hunt, who was granted only a minimal disability rating despite his PTSD and was shuffled from one medication to another.

“VA and DBH (Division of Behavioral Health) providers are loaded down with too many patients and red tape,” Stucker says. “The go-to ‘fix-all’ is pills. There is little to no therapy involved. Some of the providers care but (they) are pressured to see more patients, so the quality of care suffers greatly.”

Stucker is studying clinical psychiatry at Emporia State University in the hope of becoming a counselor who can fill a need in a VA system unprepared for the influx of veterans returning with behavioral health issues.

Garrison, who is living with debilitating muscle weakness that he fears was caused by exposure to airborne toxins from his military base burn pit, recently received a service dog courtesy of a North Carolina dog training company and a veterans nonprofit called the Food Industry Serving Heroes, or FISH.