Dissecting the key issues and races on both sides of state line... 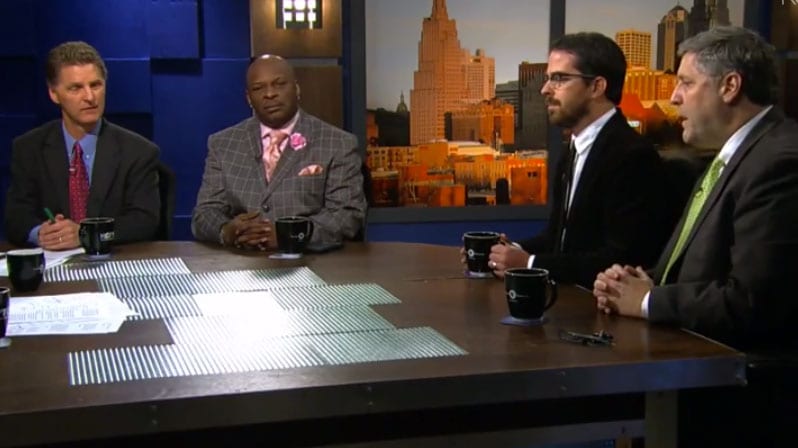 Have you been too busy to focus on the election because you’ve been fixated on the Royals? Don’t despair. All is not lost.

KCPT’s Nick Haines provides you with a pithy and insightful rundown of the key issues and races on both sides of state line. Joining the KCWIR team to research your Kansas and Missouri ballot choices from top to bottom are Steve Kraske of KCUR/UMKC, Dave Helling of the Kansas City Star, Steve Vockrodt from The Pitch and Eric Wesson, The Call.

UNITED STATES SENATE (KS)
Let’s face it, this race between Republican Pat Roberts and Independent Greg Orman sucked the oxygen and the money out of the room for most of this election season.

MISSOURI STATE AUDITOR
Don’t think for a moment all these “exciting” decisions are happening only on the Kansas side. At the top of the ballot in Missouri, wait for it…is Missouri State Auditor. If you happen to pick up your ballot and notice incumbent Republican Tom Schweich doesn’t even have a Democratic opponent listed, it’s not a printing error.

MISSOURI AMENDMENT #2: CHILD SEX CRIMES
If you live in Missouri, did you know will be confronted with four statewide questions for you to say YEA or NAY to on Tuesday?
By the way, there is no Amendment #1. But AMENDMENT #2 asks whether past criminal history should be allowed during a trial when a suspect is charged with child sex crimes?

MISSOURI AMENDMENT #3: TEACHER TENURE
You may have seen ads on TV about this one. AMENDMENT #3 would set state standards for evaluating Missouri teachers based on student performance and limit their contract to no more than three years.

MISSOURI AMENDMENT #6: EARLY VOTING
Controversy swirls around this ballot question that would establish six days of early voting leading up to a general election in Missouri. Kansas has had advanced voting for a long time. You can vote up to 20 days before Election day. So what’s not to like about this effort to make it a little easier to cast ballots in the Show-Me-State?

MISSOURI AMENDMENT #10: RESTRICTING GOVERNOR’S POWER OVER THE BUDGET
It would prohibit the governor from restricting funds already budgeted for education and other state services. What’s this really about and why should I care?

DECRIMINALIZING RAFFLES IN KANSAS
Now if you think, why is Missouri having all the fun with these ballot question? Why doesn’t Kansas ever have statewide issues to decide? Well on Tuesday you do. Look for a constitutional amendment to decriminalize raffles. Yes, “raffles” – as in what church groups, and sports teams and schools do to raise money. Currently, its illegal in the state of Kansas for priests, ministers, PTA board members and school sports officials to be making money off raffle sales. Has anyone been jailed over this?

KANSAS SECRETARY OF STATE
In Kansas, beyond the race for Governor, every statewide office is up for grabs. Last week, we brought you a one-hour debate between the candidates for Kansas Secretary of State where Republican Kris Kobach is taking on Democrat Jean Schodorf.

TO RETAIN OR NOT TO RETAIN
Let’s not forget, whether you live in Kansas or Missouri, you’re going to see thousands of judges on your ballot on election day. I exaggerate slightly. But there’s an organized campaign to remove only one of them. And that’s in Johnson County where there’s a movement led by a Johnson County Community College science professor to oust Kevin Moriarty from the bench. He’s the judge who just gave out the first marriage licenses to same sex couples in the state of Kansas.

KANSAS ATTORNEY GENERAL
Speaking of the gay marriage issue, the man who petitioned the Kansas Supreme Court to block those gay marriage licenses, Kansas Attorney General Derek Schmidt, is running for re-election. But Is that an issue in his re-election campaign? He’s taking on Democrat A.J. Kottich.

KANSAS INSURANCE COMMISSIONER
There is a totally open statewide office up for grabs in Kansas and that’s for the office of Insurance Commissioner. Incumbent officeholder, Republican Sandy Praeger, is not seeking re-election to the post, so there’ll be someone new in that job regardless of how you vote. And it will be someone from Johnson County. Will it be Dennis Anderson, a Democrat from Overland Park, or Ken Selzer, a Leawood Republican?

LIGHT RAIL IN KC
Closer to home, light rail is on the ballot on Tuesday if you live in Kansas City, Mo. But you might have a hard time finding the issue when you head into your local polling station.

That’s because a judge allowed the city to draft the language for the ballot. Being no fans of the plan’s author, Clay Chastain, the council opted not to mention the words “light rail” when it comes to Questions 1 and 2, which are the two sales taxes that would fund Chastain’s 22-mile light rail line from KCI airport in the north to the Country Club Plaza in the South.

Even Chastain is encouraging voters to reject the ballot questions. (Watch KCPT video)  But what if voters say YES? What would happen then?

JOHNSON COUNTY CHAIR
Last week, we dissected the race for head of Johnson County government between Ed Eilert and Patricia Lightner. You can watch that debate again here.

Voters in Salina, Kansas vote to keep fluoride in water

A look back at the sights and sounds, and the winners and the losers, of Tuesday night

Educators working down to the wire to defeat Missouri Amendment 3

Educators working down to the wire to defeat Missouri Amendment 3

Could this election swing control of Kansas House to center?

However Colorado votes, GMO labeling debate far from over