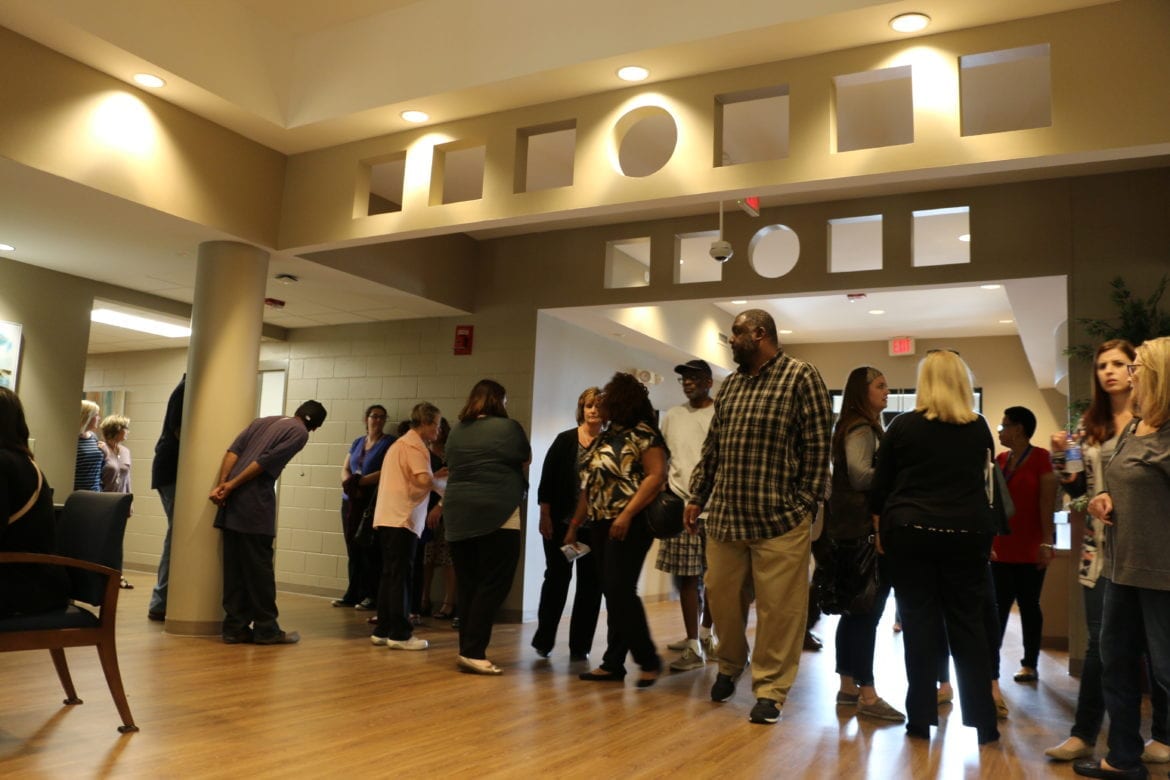 Visitors streamed into the lobby of the Kansas City Assessment and Triage Center on Friday, which marked the ceremonial opening of the mental health crisis center set to begin operating Monday at 12th Street and Prospect Avenue in Kansas City. (Photo: Mike Sherry | Flatland)
Share this story

Supporters of a new mental health crisis center in Kansas City hailed the facility as a model for the rest of the state — and beyond — during its ceremonial opening this afternoon.

“Other communities in Missouri are going to have their eyes on this project because they want to emulate it,” said Mike Nietzel, deputy director of the Missouri Department of Mental Health (DMH).

Nietzel was one of many speakers who took to the podium outside the new Kansas City Assessment and Triage Center, at 12th Street and Prospect Avenue.

Nick Ragone, chief marketing officer for Ascension, a Catholic health system based in St. Louis and one of the chief financial backers of the project, said the center will serve as a national model, in part because Ascension considers it a blueprint for the other 25 states in which it operates.

The 16-bed center, which is housed within a DMH building, is scheduled to open Monday.

It is designed as an emergency room alternative for first responders who encounter people suffering the effects of substance abuse or mental illness. Stays will be less than 24 hours, allowing for stabilization and identification of those in need of longer-term services, such as housing or counseling.

The center is the result of a multi-party partnership that includes Kansas City government and Missouri hospitals that have pledged a combined $1 million toward the center’s annual operating costs.

The city rehabbed the 14,000-square-foot building and is leasing it from DMH, which plans to offer outreach and social services from the northwest wing of the building. The city also is contracting with ReDiscover, a Lee’s Summit-based community health center, to operate the center.

Friday’s opening was the culmination of a three-year process that saw the crisis center evolve from a vision driven by Kansas City Municipal Judge Joseph Locascio into a bricks-and-mortar reality. One of his key allies was Kansas City Councilman Scott Wagner.

Locascio traces his interest in the center to a talk he heard in 2013 by a substance-abuse executive from San Antonio, Texas, detailing the types of services available at his facility.

Wagner said Friday that his idea for such a facility germinated even earlier, when in December 2012 a teenager with a history of mental illness died outside in the cold behind a Northland Walmart.

The big breakthrough came a year ago, when Missouri Attorney General Chris Koster announced a deal that funneled $20 million from the sale of two Kansas City-area hospitals to the triage center.

Ascension owned the two facilities, St. Mary’s Hospital in Blue Springs, Missouri, and St. Joseph’s Hospital in south Kansas City, and its executives agreed to the use proposed by the state.

Under Missouri law, nonprofit corporations must use the proceeds of any sale for purposes consistent with their charitable intent. The attorney general has the power to enforce the law.

The Kansas City center is similar to the Rainbow Mental Health Facility in Kansas City, Kansas, which opened in 2014.

In his remarks, Locascio said one of the most remarkable aspects of the center was that it was created on behalf of the “least politically powerful and visible members of our society.”

Wagner said the death of the teen emboldened him to seek a solution on behalf of voiceless people like that boy.

“Who was going to speak for him and hundreds like him?” Wagner said.

—Mike Sherry is online news editor for KCPT, a partner in Heartland Health Monitor, a regional collaboration that includes KCUR and KHI News Service, an editorially independent initiative of the Kansas Health Institute.