Touring Epicenters of Melancholy for Fun and Money 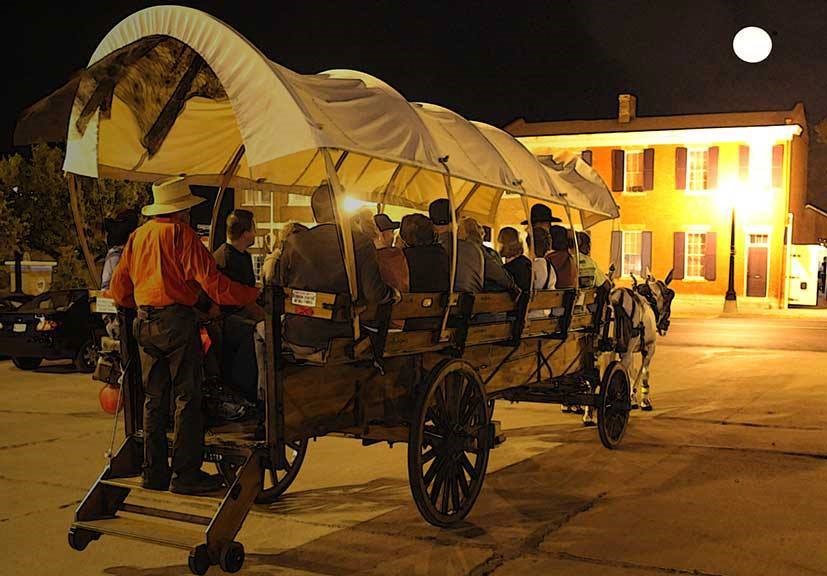 Guests for 1859 Jail Ghost Tours cap their evening with a ride in a mule-drawn wagon. (Courtesy | Jackson County Historical Society)
Share this story

A full moon rises over the 1859 Jail & Marshal’s Museum in Independence.

As twilight deepens on a recent Saturday evening, 20 guests crowd into the historic lockup’s front office. It’s the first stop on the 1859 Jail Ghost Tour, the annual October weekend attraction that routinely sells out.

Several visitors are handed small devices that resemble television remotes. A tour guide explains the monitors are capable of registering changes in the nearby electromagnetic field and maybe signaling the presence of a spirit.

“Sometimes the jail is super–active,” says Erica Edwards, a member of Dusk 2 Dawn Paranormal Investigations, which leads the tours.

After a few nervous laughs, guests follow Erica and her colleagues as they are shown several low-lit rooms, told of a jailer who died after being shot during an 1866 jailbreak, and encouraged to shoulder their way into the same small limestone cells where women and children once were incarcerated during the Civil War.

No ghosts are encountered but – as the tour guides close heavy iron doors on their visitors – the experience is still plenty creepy.

“I know some people are evenly split on this,” says Caitlin Eckard, executive director of the Jackson County Historical Society, which owns the jail at 217 N. Main St.

“Some people view it as sensationalizing people’s deaths.”

But, Eckard adds, the jail tours – which end with a mule-drawn wagon ride around Independence Square – represent a novel way to convey history to a different demographic than the visitors who show up during daylight hours. And, given the Kansas City area’s sometimes violent past, the actual stories of some historic locations are sufficiently unnerving.

“As long as we are still telling the real history of the jail, we are fulfilling our mission,” Eckard says.

For decades, Kansas City thrill seekers every October have patronized the haunted houses downtown and in the West Bottoms that offer hair-raising shocks in tours leading through old or fatigued buildings.

But, more recently, nonprofit organizations that either own or maintain historic structures across the Kansas City area have chosen to host their own ghost tours and paranormal investigations, to both generate revenue and raise the profiles of their legacy properties.

The tours have prompted the occasional discouraging word among nonprofit supporters as to whether such attractions are appropriate for community heirloom assets such as the 1859 Jail Museum, the Wornall House in Kansas City, the Shawnee Indian Mission in Fairway and the Vaile Victorian Mansion, also in Independence.

All are listed on the National Register of Historic Places; the Shawnee Indian Mission is also a National Historic Landmark. And all are hosting similar events this month.

But the ghost tour leaders consider themselves responsible stewards of the stories these buildings offer.

“Some people think we will be chasing them around with a chainsaw,” says Jimmie McVey, Dusk 2 Dawn’s founder and lead investigator.

“But the 1859 Jail is a historic building and we want to lead the tour with class.”

There are two principal reasons for leading such tours in historic buildings, nonprofit officials say.

One is cash flow.

The regular adult admission price to the 1859 Jail Museum is $6. The adults who took the ghost tour last Saturday each paid $22. The Dusk 2 Dawn tour leaders host three tours every Friday and Saturday night in October.

“Now the tours are one of our larger revenue streams,” Eckard says.

This Saturday the three-story, 31-room landmark at 1500 N. Liberty St. in Independence will host Bram Stoker – not the author of the vampire novel “Dracula” who died in 1912, but a reenactor who will instruct visitors in Victorian funeral traditions.

Stoker will greet guests in one room of the 1881 home, while society members in period apparel will display a Victorian-era coffin in another and play an antique organ in still another.

Tickets cost $15 for one guest and $25 for two. Organizers are expecting 300 visitors between 5 p.m. and 8 p.m., says Sandy Dougherty, president of the Vaile Victorian Society.

“As a nonprofit organization, we are always trying to think of ideas to bring in the public but we can’t afford to buy advertising,” Dougherty says. “And, over the last few years, anything dealing with the paranormal has become popular.”

Besides Saturday’s Bram Stoker appearance, the Vaile Mansion often hosts paranormal teams that organize nighttime investigations that often feature the use of sophisticated ghost-hunting gear and gizmos. The nonprofit realizes about $1,000 a month from the investigations, Dougherty says.

“That is money that goes right into our treasury,” says Dougherty. “It really has been a blessing and so, while I may not agree with everything that some people believe, well, to each their own.”

Beyond revenue, a second reason for ghost tours is exposure.

The ghost tours and paranormal investigations attract a clientele that may travel great distances if they learn of a new “active” location.

This past summer the cable television show, “Haunted Towns,” which showcases the adventures of the ghost-hunting Tennessee Wraith Chasers, featured a visit to both the 1859 Jail Museum and the Vaile Victorian Mansion.

Opinions of the episode have been mixed among members of the nonprofit groups that support each facility.

But there’s been no disagreement that the show, broadcast to a national audience, had a dramatic impact on attendance.

Almost immediately the number of patrons to the Vaile Victorian Mansion spiked, says Emily Ritoch, a historical interpreter at the home.

“That included people from Arizona and New Mexico, as well as from people who live right across the street,” she says.

“It was essentially free marketing for us,” adds Eckard of the Jackson County Historical Society.

Such tours become viable when considered in the context of “dark tourism,” Eckard says. The term refers to the growing number of visitors who seek out otherwise unlikely vacation destinations such as decommissioned prisons.

While the presence of actual ghosts at the 1859 Jail Museum can be debated, it doesn’t take long inside the lockup’s rough-surfaced limestone blocks for a visitor to recognize the building as a genuine epicenter of melancholy. Artifacts on exhibit in one cell include a ball and chain once shackled to the ankles of inmates.

Unlike the operators of the West Bottoms haunted houses, the nonprofit members who operate the 1859 Jail Museum and Vaile Victorian Mansion do not need to gin up unpleasant scenarios for visitors. The jail’s National Register of Historic Places nomination form documents how the facility served as a military prison during the Civil War era and in 1860 hosted guerrilla leader William Quantrill.

Women and children, according to the Jackson County Historical Society, were imprisoned there during the enforcement of General Order Number 11, when Union troops in 1863 attempted to clear Jackson County of what they believed to the Southern sympathizers.

Meanwhile, Eliza Wornall, the second wife of Kansas City farmer and banker John Wornall, really did have seven children, only two of whom lived beyond the age of three.

“There were aspects of her life that were very hard,” says Kerrie Nichols, executive director of the nonprofit Wornall/Majors House Museums, which operates the John Wornall House at 6115 Wornall Road.

This year’s October ghost tours, researched by the nonprofit’s education director, places Eliza’s life in the rugged context of her time, which included the use of the Wornall House as a field hospital during the 1864 Battle of Westport.

“We offer fact-based education,” says Nichols. “But the tour also fulfills the desire that many of us have about Halloween and the spookiness of an old house.”

Meanwhile, some historic buildings may just have some otherwise-unexplainable stuff going on.

This month the Shawnee Indian Mission in Fairway will host a paranormal investigation at the 12-acre site at 3403 W. 53rd St.

The mission was established in the 1830s as a manual training school attended by young members of the Shawnee, Delaware and other American Indian nations.

Odd events have been recorded at the site’s West Building, which for years served as a residence. A plumber once invited to repair a sink there has declined to return after experiencing what he described as a “push,” says Kathy Hamilton-Dix, an advisory board member with the Shawnee Indian Mission Foundation, which raises funds for the site operated by the city of Fairway.

“I myself have experienced the cold, unexplainable push on my shoulder as I stood in the building,” she says. “It’s hard to describe, but even when you move that cold pushing sensation follows you.

“I won’t stay inside the building by myself.”

“The ghost tour guides first and foremost care about the preservation of the building,” Eckard says. Jackson County Historical Society board members recently approved an initial phase of the 1859 Jail’s restoration. A $75,000 grant is helping to fund several upgrades, among them repairs to the building’s west-facing windows and load-bearing walls.

“In order to insure that we keep the historic properties intact, we have been partnering with them to make sure there is no damage to them,” Shay says.

Those who visit the Wornall House website will find fine-print alerting patrons that guests who are “intoxicated, rude or do not follow instructions of on-site staff” will be asked to leave, with no refunds issued.

“Occasionally we’ve had to remind people that this is a historical institution,” Nichols says.

This month, for the first time, paranormal investigators will conduct a public night examination of the Bingham-Waggoner Estate at 313 W. Pacific Ave. in Independence, once home to 19th century artist George Caleb Bingham.

“The concern I have is that the furnishings be protected,” Schreiber says. “If the event is well-managed and well-monitored, it could be a good revenue producer.”

The late October event at the estate has already sold out, with 20 guests each buying $65 tickets. The nonprofit Bingham-Waggoner Historical Society will receive a percentage of that income, Schreiber says.

But just what ghost stories will be investigated?

After Bingham’s death in 1879, members of the Waggoner milling family of Independence lived happily in the home for more than 90 years, Schreiber says.

Then again, while in residence there, Bingham produced two versions of his controversial painting entitled “Martial Law” or “Order No.11,” which depicted the enforcement of the 1863 General Order Number 11, which led to the incarceration of those women and children up at the 1859 Jail.

As it happens, Bingham also painted a portrait of Eliza Wornall not long before her death.

Just how much of residual unpleasantness might be attached to the Bingham-Waggoner mansion?

“I’ve been here 19 years waiting to see a ghost and I’ve been disappointed,” he says.