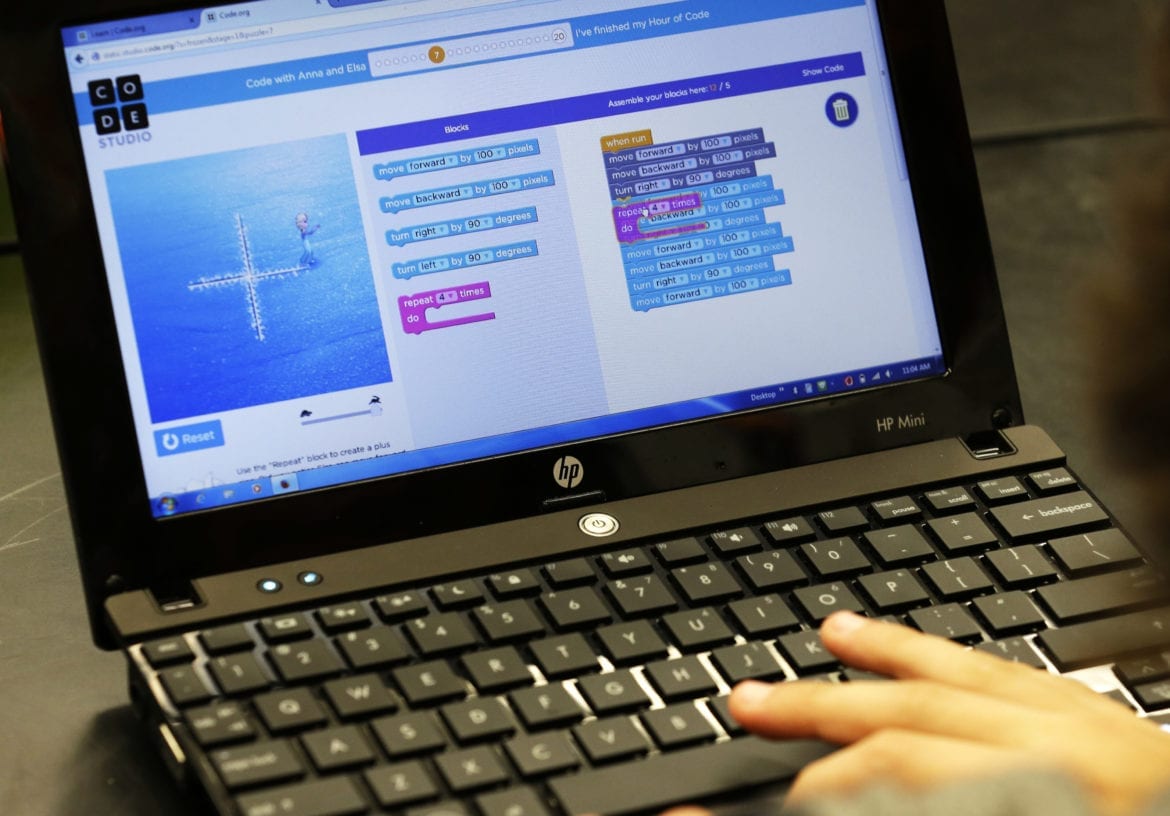 Representatives from academia and industry in the Kansas City area are hoping to ramp up programs in science, technology, engineering, and math (STEM), so that high-tech employers can hire locally. (AP file photo)
Share this story

In the next few years, many tech businesses in Kansas City expect to do a lot of hiring, with starting salaries that most recent college graduates can only dream of.

But will these jobs go to native Kansas Citians or to people recruited from other places?

Some business and civic leaders are trying to tip the scales. They’re working to lure young Kansas Citians into STEM fields – science, technology, engineering and math – in hopes of turning them into a new homegrown tech workforce.

When 20-year-old Harold Burgos was growing up in Kansas City, he says the most obvious career path for him was to become an auto mechanic.

“Me and my dad would spend nights – just me handing him tools over so he could fix his car,” Burgos says. “I kinda liked how if something was broken, my dad was able to get the car to work. I thought that was always amazing.”

His parents are immigrants from Central America who didn’t graduate from high school. Burgos says he watched them struggle in tough blue-collar jobs to make ends meet. They taught him to work hard, but also to dream big. 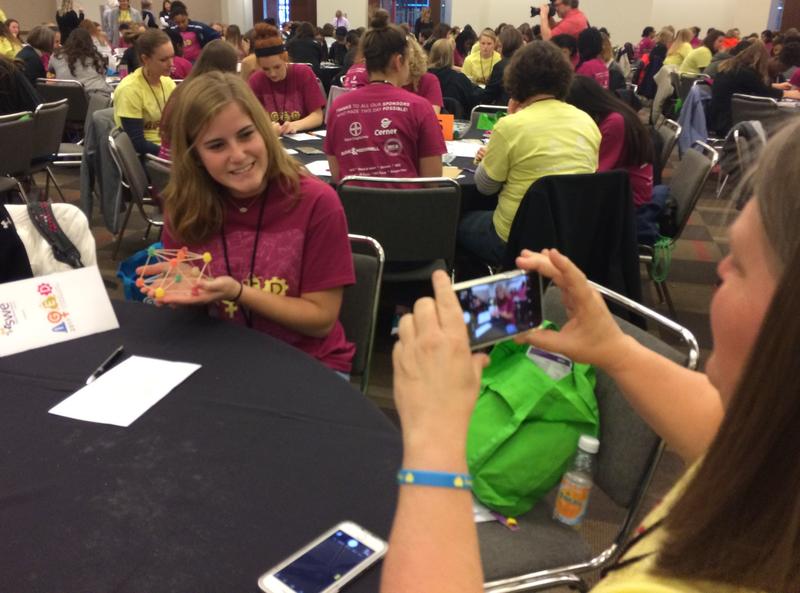 High school student Sofie Mermelstein poses with a weight-bearing toothpick-and-gumdrop structure she helped create for her mentor Linda Rottinghaus, a civil engineer. (Alex Smith | KCUR 89.3)
“They told me, you know, here in the United States, you have many, many opportunities. More opportunities than you would ever have in our countries. Therefore, I believe if you want to do something, you can do it if you’re willing to put in the work,” Burgos says.

When he was a teenager, Burgos was introduced to computer coding in a mentoring program called Project Lead the Way. He says he realized that fixing cars and programming code aren’t that different.

The program turned out to be life changing. Burgos is now doing an apprentice program at health information technology giant Cerner Corp., and he’s planning a career in IT.

Cashing In On the Tech Boom

In the next few years, Kansas City will need a lot more people like Burgos as local tech businesses try to follow the lead of cities like Cambridge, Massachusetts, and San Jose, seeking to cash in on the boom in health and information technology.

Cerner has already begun hiring some of the 16,000 new employees it will need for its new Innovations Campus in south Kansas City – with average salaries starting at around $75,000.

Add expected hiring at other health and bioscience employers, and the number of STEM positions that are opening in the next 10 years more than doubles. In the last few years, the local STEM job growth rate has been twice the national average.

“Right now, we are importing a lot of talent that we’re not able to create locally. And there’s no reason we can’t create that talent locally.” — Wayne Carter, President and CEO, Kansas City Area Life Sciences Institute

But there’s a problem, says Wayne Carter, President and CEO of the Kansas City Area Life Sciences Institute. Not enough young, local people have latched on to these fields, as they have in other places.

“You would think so. Yet it is surprising the number of students that really are not aware of the large number of jobs that are here, especially in the life sciences,” Carter says.

In Kansas City, just under 10 percent of workers have bachelor’s degrees in science or engineering, less than half the percentages in Washington, D.C., or San Francisco. As a result, Carter says, many local employers are forced to look outside the area for new recruits.

“Right now, we are importing a lot of talent that we’re not able to create locally. And there’s no reason we can’t create that talent locally,” Carter says.

To turn that around, companies like Cerner and CEVA, as well as schools like the University of Missouri–Kansas City (UMKC) and the University of Kansas have been developing programs to get middle- and high-school students interested in these fields, connect them with working engineers and scientists, and help them boost their tech skills.

Melissa Patterson-Hazley, an educational psychologist at UMKC, says the simple step of connecting students with scientists can do a lot to steer students toward these fields.

That’s in part due to an idea in education called “possible selves.”

“You can only aspire to be something that you see as possible,” Patterson-Hazley says. “You come up with these possibilities of what you can be based on people you’ve interacted with.”

Patterson-Hazley says mentoring can be especially important for young women or students from cultural or socioeconomic backgrounds that didn’t expose them to scientists or engineers they can identify with.

Patterson-Hazley lauds the mentoring efforts that are taking place in Kansas City, but she says they are not as coordinated as they need to be.

There’s another big factor at play: the wide range in the quality of science and math education in K-12 schools in the area.

Many schools aren’t nearly as equipped as others to teach these subjects. A good calculus teacher, for example, can be hard to attract and keep – especially when schools are struggling with budget cuts.

Patterson-Hazley hopes that more successful schools can share their best teaching tools with others that aren’t turning out lots of future STEM grads.

“There’s a place for competitiveness, but in terms of educating enough Kansas Citians to work for our tech companies, there probably needs to be more collaboration than there currently is,” Patterson-Hazley says.

At a recent event at Bartle Hall in downtown Kansas City, 15-year-old Sofie Mermelstein from Blue Springs High School worked with a table of other high school girls to build a structure out of gumdrops and toothpicks that will support bags of sand.

Mermelstein’s mother, Laurie, says her daughter has had an interest in engineering – especially bridge design – for as long as she can remember.

This day of mentoring was sponsored by the Kansas City Society of Women Engineers, and if the turnout of nearly 300 students is any indication, there’s plenty of local interest in STEM.

The question is whether the mentoring – and the science classes – will lead Sofie Mermelstein and students like her into STEM careers, and possibly on to staff the next Silicon Valley – right here in the Midwest.

— Alex Smith is a health reporter for KCUR. You can reach him on Twitter @AlexSmithKCUR. For stories on health and other topics, go to kcur.org.