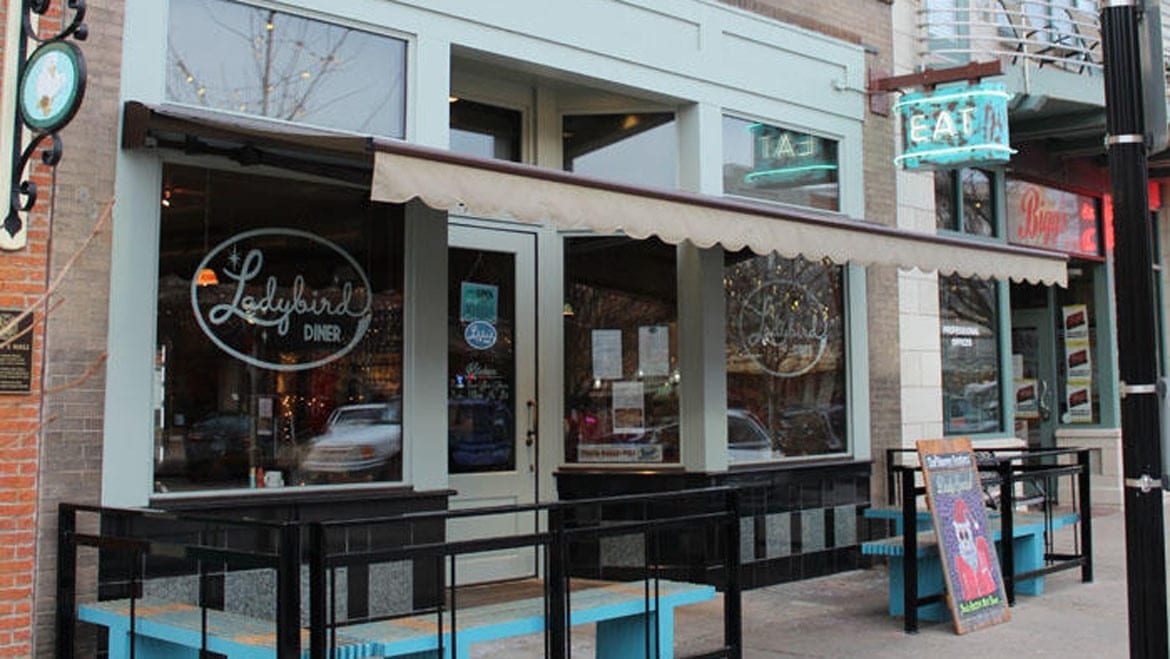 Former U.S. Health and Human Services Secretary Kathleen Sebelius cites the Ladybird Diner in downtown Lawrence and its owner as examples of the how the Affordable Care Act is making a difference in people's lives. (Jim McLean | Heartland Health Monitor)
Share this story

A Lawrence businesswoman has become something of a poster child for the Affordable Care Act.

Meg Heriford, owner of the Ladybird Diner, didn’t seek the spotlight but has been thrust into the role by former U.S. Health and Human Services Secretary Kathleen Sebelius.

Sebelius, who also served two terms as Kansas governor, still has a home in the state as well as one in Washington, D.C.

On a recent trip back to Kansas, Sebelius had lunch at the Ladybird and heard Heriford’s story, which she now relates to audiences whenever she’s asked to speak about the ACA and the difference it’s making in people’s lives.

“The Ladybird Diner on Mass. Street in Lawrence is a wonderful new operation. The owner there, the first time I was there, said to me, ‘You know, Kathleen, this is really your diner.’ Well, that’s cool. Great. Why?” Sebelius said in a recent talk. “She said, ‘Well, I’ve always wanted to open a diner. I’ve had that dream all my life, but I have a pre-existing health condition. But the passage of the health law and my ability to get insurance allowed me to then open this diner.’” Meg Heriford, owner of the Ladybird Diner, says the Affordable Care Act has allowed her to get affordable health insurance despite a pre-existing condition and open her business in downtown Lawrence. (Jim McLean | Heartland Health Monitor)

At her bustling downtown diner, Heriford said she doesn’t mind Sebelius using her business as an example of an ACA success story.

“Certainly I wouldn’t call it a perfect program, but neither am I,” Heriford said. “So, I think I’m an apt poster child.”

Before the health reform law, Heriford said a pre-existing condition — a lump in one of her breasts and a genetic predisposition for cancer — made coverage either impossible to get or prohibitively expensive.

But under the ACA, insurance companies can no longer deny coverage. Heriford was able to get a plan through the ACA marketplace that covers her and her family for a little more than $200 a month.

Having that security, she said, allowed her to quit her waitress job, start the diner and take what she hopes is a temporary cut in pay.

Heriford said her premiums probably are going up for 2016, but she was able to compare plans available through the marketplace.

“Yep, we’re back in the marketplace looking again and it may indeed go up a bit,” she said. “But I think that it is certainly more accessible to me now than it would have been five years ago.”

Heriford is doing what millions of other newly covered Americans are doing: With insurance companies raising rates, she’s looking for the best deal she can get.

Sheldon Weisgrau, director of the Health Reform Resource Project in Kansas, said it’s good that Heriford and other consumers are price shopping. But he said they should be careful not to sacrifice good coverage to get lower premiums.

“That is a concern. People have become a little savvier in looking at other costs, but the monthly premium is still the primary consideration,” Weisgrau said. “That can work well if you don’t need to use a lot of health care services throughout the year. If you do, some of those people may be facing higher out-of-pocket costs down the road.”

Heriford said she understands the trade-offs and wants the best deal she can get on good coverage.

Federal officials tracking ACA enrollment said that consumers like Heriford are setting records in the marketplace.

Nationwide, more than 8.5 million people have selected plans since enrollment started Nov. 1, including nearly 85,000 in Kansas and more than 250,000 in Missouri.

A Quick, Clickable Roundup Of Health News From Our Region — And Beyond — For The Third Week Of September

Nearly 200,000 Missourians may not be able to afford healthcare after a pending Supreme Court ruling