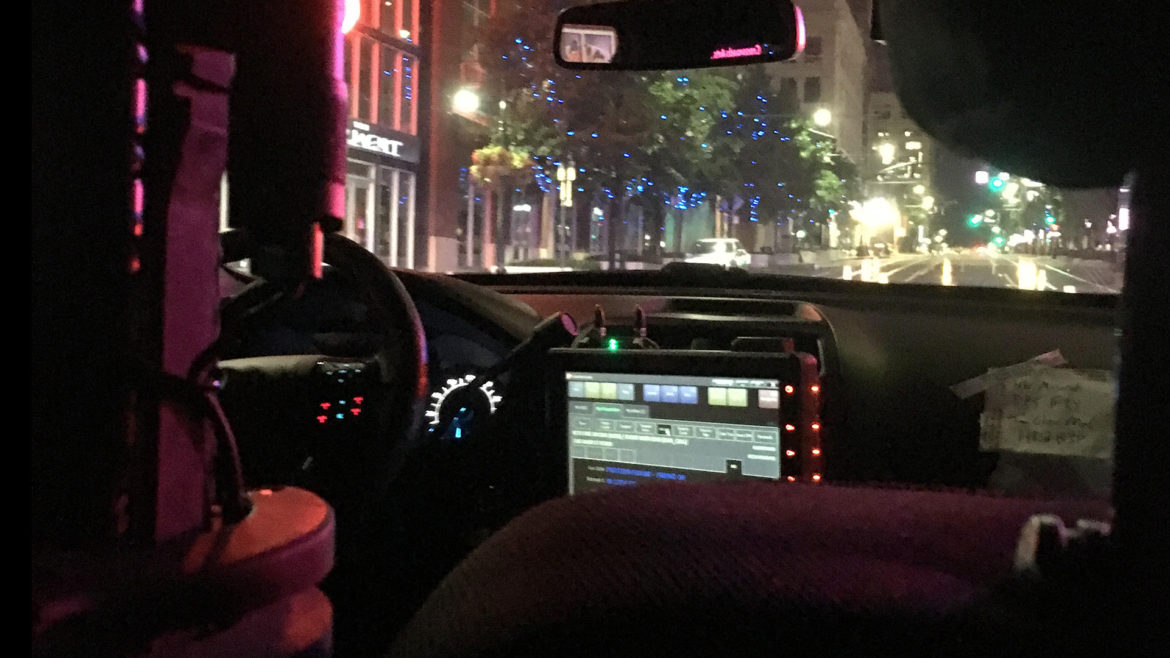 Inside a police car on patrol. (Brian Perlman | Flatland)
Share this story

Ta’Ron “Rio” Carson was homecoming king and president of his senior class at Northeast High School. Yet at just 24, this larger-than-life personality was shot and killed last year in midtown Kansas City, Missouri.

Kansas City is not unlike other urban areas around the nation in that elected officials and the law enforcement community have struggled for years to make the city safer.

But Kansas City has diverged from many U.S. cities in one respect: Its homicide rate remains stubbornly high — the fifth highest in the nation in 2018, according to AmericanViolence.org. (According to Flatland’s own analysis, KCMO came in at number six in the nation, having been just edged out of the top five by Memphis, Tenn., in 2018.) In many other cities across the country, the rate has remained relatively low during the past decade or has dropped substantially in recent years.

Kansas City’s murder rate problem has defied solutions that have worked elsewhere. Two of the city’s signature violence reduction programs, Aim4Peace and the KC No Violence Alliance (NoVA), are based on successful models from Chicago and Boston, respectively.

The problem has also endured despite the best efforts of organizations like the Ad Hoc Group Against Crime, Mothers in Charge and others.

The violent crime trouble has dogged Kansas City Mayor Sly James during his eight years in office, and it’s an issue he now passes on to his successor, Quinton Lucas, who takes office today.

As the founder of the Ad Hoc Group Against Crime, a former police officer and longtime civic leader, Alvin Brooks is highly attuned to the homicide headache in Kansas City. He has ideas on why the city’s murder rate remains so high.

Part of the problem, Brooks said, is that Aim4Peace and NoVA don’t address mental health, poverty, education and other root causes of violence. “They’re only dealing with the aftereffects of the crime that has been committed,” he said, “and the bigger picture is how do we deal with the prevention side, the intervention side?”

KCPD crime statistics show that many of the homicides involve African Americans as either the suspect or the victim. For each year between 2016 and 2018, the data show that black males accounted for the majority of the victims and suspects in KCMO murder cases. Black officers make up approximately 11 percent of the sworn officer force in the KCPD, approximately 17 percentage points less than the black population of the city, according to census data.

Another educated observer is Andrew M. Fox, a former professor at the University of Missouri-Kansas City (UMKC) who is now a senior manager with the Department of Children, Youth and Families for the state of Washington.

While at UMKC, he was part of a research team that studied the results of NoVA, including publishing a 2015 report and a separate journal article last year. The research questioned the long-term effectiveness of the program.

From his perspective, Fox said NoVA suffered in Kansas City from a hot-and-cold attitude from the police department over time. “As the leadership has changed there have been new priorities to reduce violence,” Fox said.

Fox also argued that Aim4Peace and NoVA work at cross-purposes.

While Aim4Peace takes a public health approach to violence, NoVA is a focused deterrence model that attempts to take the worst offenders off the streets.

Aim4Peace uses “violence interrupters,” who aim to stop retaliatory violence. In NoVA, law enforcement officials bring in people most likely to commit violence for face-to-face meetings termed “call-ins.” Government officials offer them services to help them change their behavior and warn them that they will face harsh punishments if they don’t take that path.

“There’s tension between those models in terms of how to carry out violence prevention — both there was in Kansas City and there is nationally,” Fox said in a phone interview.

Overall, Fox and his UMKC colleagues found that while NoVA was effective in the short term, it was ultimately ineffective or counterproductive in the long term in KCMO.

In last year’s article, Fox and his colleague Kenneth J. Novak wrote that they were unaware of any U.S. city where focused deterrence succeeded over the long run. They posited: “Perhaps, there are inherent flaws in the model that we have not yet discovered, but which, once found, could be corrected.”

Yet, Fox told Flatland that focused deterrence proponents may have unrealistic expectations.

“If our standard for law enforcement intervention is long-term, significant, sustained reduction in violence, we’ve set the bar way too high,” he said. “[KC NoVA] had a lot of successes as we look back on it. You had county and city leadership all working together to reduce violence. That’s a big success.”

The question remains, though: What is it going to take for Kansas City to see the reduction in homicides that other cities have achieved?

One strategy is to appeal to people’s pocketbooks.

Law enforcement authorities in June announced that the cash reward for an anonymous tip that leads to an arrest for a homicide in KCMO was increasing from $10,000 to $25,000.

City leaders also say they need help from Jefferson City in the form of gun laws that, for instance, require people to report a lost or stolen firearm to police, implement universal background checks for purchases, raise the legal purchasing age and tighten up concealed carry rules.

“At some point in time,” Mayor James said at a June news conference, “we’re going to have to decide as a country, as a state and as a city whether we believe that it is more important for everybody to have a gun and people to continue to die needlessly, or if we should start taking steps that reduce the number of deaths by taking guns out of the hands of people who shouldn’t have had them in the first place.” (Lucas takes office just days after a shooting in Gilroy, Calif., where a 19-year-old gunman killed three people and injured a dozen others.)

Lucas and other city leaders are also hoping to address the root causes of violence, such as mental health issues. This is the sort of public health approach — where the focus is on the causes of an epidemic to stop or prevent it — that Aim4Peace employs. The program is, in fact, run out of the city’s health department.

But can this approach finally take hold in Kansas City, Missouri?

Lisa Pelofsky believes it can. She is a former president of the Kansas City Board of Police Commissioners.

“I don’t think Aim4Peace has failed,” she said. “It just was implemented in a very small part of the community. If you have a massive headache and you take a baby aspirin, it doesn’t get rid of the headache. And that’s kind of what’s happened. The dose isn’t right yet; it needs to be amplified.”

Aim4Peace has been implemented in one of four of the KCPD’s East Patrol Division sectors. And even then, said city health department Director Dr. Rex Archer, a lack of funding for manpower has stymied progress. The case is the same in Chicago, he said.

Health department deputy director Tracie McClendon-Cole said there are limitations to analyzing the effectiveness of Aim4Peace through hard numbers alone. It’s difficult to quantify Aim4Peace’s success in areas like encouraging more neighborliness, she said. And even though she believes city leaders have tilted more toward the law enforcement approach employed by NoVA, McClendon-Cole disputes the notion that the two programs work at cross-purposes.

“They’re not incompatible,” she said.

As the new mayoral administration comes into power, Archer and McClendon-Cole plan to continue work on initiatives aimed at reducing crime by addressing a broad range of societal problems, such as a lack of affordable housing, income inequality and childhood trauma.

And that means working with community members to overcome hurdles that have been around for decades, McClendon-Cole said.

“I have hope that we can build those bridges,” she said.