When Food Firms Cut The Salt, What Do They Put In Instead? 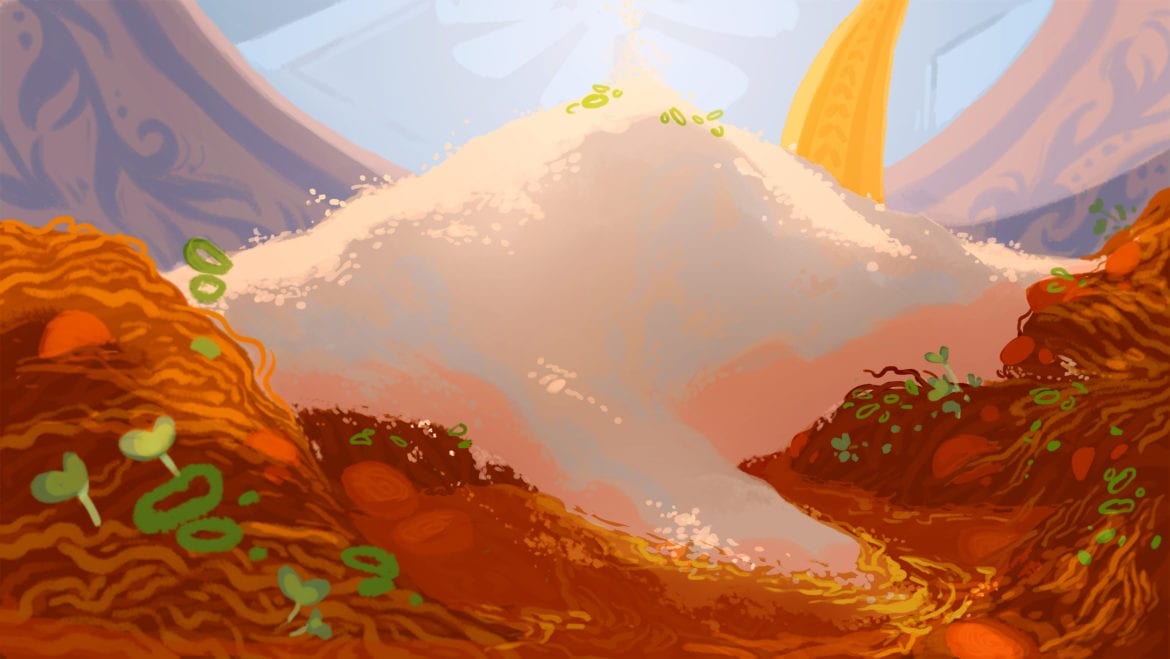 Hans Lienesch, also known as the Ramen Rater, made a career out of reviewing instant noodles, starting in 2002. The 41-year-old used to eat two packs a day, every day — but afterwards, he got sweaty, stressed out, and felt his heart rate go up. His doctor told him he was close to having high blood pressure, so, after a thousand reviews, he decided to cut back to just one pack of instant noodles a day.

As a professional consumer of salt and seasoning, he had tried a low-sodium instant noodle before: It was so bland, he put it on his bottom 10 list for the year. Recently, a salt company invited Lienesch to do blind taste tests for a potassium chloride salt that’s meant to replace sodium chloride as salt. He tried chicken strips, pizza and pepperoni — one version made with regular salt, and another version made with the potassium chloride replacement.

Aside from a slight millisecond delay for the flavors to sink in, the food made with the salt substitute tasted virtually identical to that made with regular salt, Lienesch says.

“Not only is it knocking out a whole bunch of sodium and replacing it with potassium … it’s making the food more savory,” he says. “That just sold me right there.”

Lienesch says he recommended the potassium chloride salt to all the instant noodle companies he is in contact with. Most Americans get too little potassium as well, so he wondered, why isn’t everyone using this?

Reducing sodium, in fact, is something that instant noodle manufacturers have been unable to accomplish. That’s because even though low-sodium noodles are better for our health, they don’t taste as good — and consumers can tell, says Norio Sakurai, deputy chief executive of the World Instant Noodles Association.

Reducing sodium in food has become a priority for the rest of the food industry, too. This June, the Food and Drug Administration released a draft of sodium-reduction targets for dozens of foods, aiming to reduce Americans’ average salt consumption over the next decade from 3,400 mg a day to 2,300 mg a day.

Cargill, one of the largest beef processors in North America and supplier of beef for McDonald’s, already offers potassium chloride salt products. Researchers at Unilever (which owns brands like Hellmann’s, Knorr and Ben and Jerry’s) published a journal article this April concluding that potassium chloride is a “valuable, safe replacer” for sodium chloride (aka, table salt), and they expect more food products to do so.

Janice Johnson, a food scientist at Cargill, says food manufacturers have been asking them about how to lower sodium. She says it’s been a challenge because salt does many things, like enhance flavor, make meat succulent and preserve food.

“It does these many things that no single ingredient can do completely. The next closest is potassium chloride,” Johnson says.

It’s a little harder for something like soup, which relies on salt for flavor. One problem with potassium chloride is a slightly bitter taste.

There could certainly be health benefits to eating less sodium and more potassium.

Cheryl Anderson is an associate professor of family medicine and public health at the University of California San Diego School of Medicine and a member of the Department of Health and Human Services’ 2015 Dietary Guidelines Committee. She points to an influential 2006 study of more than 1,900 elderly men in a Taiwanese veteran’s retirement home: It found that eating potassium-enriched salt made the men more likely to survive cardiovascular disease, and they racked up lower medical bills. A 2013 review of randomized trials and studies found that eating more potassium reduces blood pressure in people with hypertension and lowers the risk of stroke.

Despite how much salt many Americans eat every day, Gary Beauchamp, emeritus director and president of the Monell Chemical Senses Center, says we can gradually get used to having less salt. Research he conducted in the 1980s found as much, and the findings have been replicated many times, he says.

“When people are forced to go on low-sodium diets experimentally, initially they found this diet very unpleasant,” Beauchamp says. “But after several months, they adapted to it. Then, when given salt levels in food that they used to think were just perfect, they found it too salty.”

Chris Loss, director of research and development at the Culinary Institute of America, agrees that we can unlearn our taste for salt. He says using potassium chloride as a partial substitute is one tool we have, but there’s a lot more we can do with cooking techniques, ingredients and psychology.

“There are no flavor molecules in food,” he says. “Flavor is in your head, flavor is a perception.”

For instance, he says his research shows that if you sprinkle a little salt on top of some mashed potatoes, the first thing you taste is salt. Then the rest of the mashed potatoes will seem very salty, even if there’s actually less salt overall. He says that’s what chefs exploit when they finish a dish with salt.

Loss says the other question is what we want: something that’s identical in flavor to the salty food we like, just with less sodium? Or something that’s just as tasty, even if the flavor is a little different?

Several years ago, Loss did a study with a Chinese chef in which they made some regular French fries, and some other fries with 33 percent less salt, but seasoned with Sichuan peppercorns and chili peppers. The 17 culinary students in the study could tell the other fries were less salty, but liked them just as much anyway, saying they were “savory” and had “more depth.”

He says he is encouraged by efforts to reduce sodium. He says if previous quests to remove fat and carbohydrates from food have taught us anything, it’s that we can’t just focus on taking out one vilified ingredient.