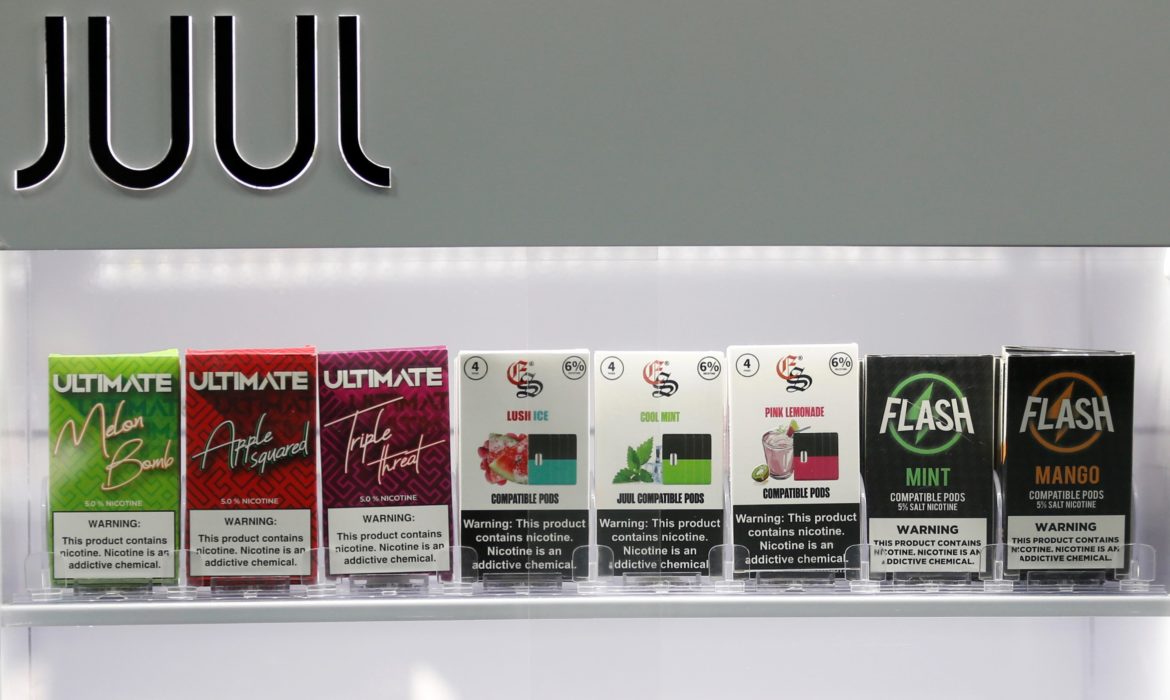 Juul Labs and other e-cigarette companies are under financial. legal and political pressure amid a vaping-related lung-injury outbreak that has spread across the country. (Robert F. Bukaty | AP Photo)
Share this story

The latest must-have item for teens isn’t the new shoe release from Nike, or a limited edition eyeshadow palette from a popular YouTube beauty guru. It’s something even more addictive than their own television screen with a controller in their hands.

It’s vaping – more specifically, a tiny USB-like piece of plastic often called an e-cigarette. These discrete devices can be no bigger than the flash drive for a computer. But they can hold things much worse than family pictures you don’t want anyone to see.

Vaping technology doesn’t burn anything. Instead, it vaporizes liquid contained in disposable pods that can be thrown away after one-time use, then easily replaced. These pods can contain nicotine, THC and – perhaps more importantly – flavoring compounds that make them more desirable to teen tastebuds than the typical tobacco cigarette.

Together, these chemicals vaporized by tiny devices can become a big problem for teens at school, where they are easy to get and hard to let go.

Peer pressure, easy access and the desire to fit in led to a life-threatening vaping addiction for one college student in New York, who became viral for her TikTok in hospital bed captioned with the simple, “stop vaping.”.

“I started vaping when I was 17,” said Diane Piccolino. “I was never addicted to cigarettes or any sort of nicotine product. Since I was 17, I went to my friends who were older and they bought me everything.”

Piccolino, now 20, reported symptoms of shortness of breath and nausea. She soon found herself lethargic, left in bed with a sore throat from an addiction that had gotten out of control.

“I believe I 100% had an addiction,” Piccolino said. “First thing I would do when waking up would be to vape. I couldn’t focus without it, I had anxiety and I lost weight while vaping.”

This feeling of dependence on a small device is not uncommon in teens.

The Centers for Disease Control reported 1,479 cases of vaping-related lung injury from 49 states and one territory as of October 15th. There have been 33 deaths confirmed in 24 states. Two of those deaths occurred in Kansas, while one has taken place in Missouri.

The CDC has said it’s too early to reach a definitive conclusion on the specific cause of the vaping injury outbreak. One reason for such caution is uncertainty about black-market products containing THC, the active ingredient in marijauna, that may also contain unknown chemicals.

As with many things these days, social media has played a role in the vaping-injury outbreak.

Platforms like Instagram, Twitter, and TikTok have provided a forum to showcase vaping posts that can fetch millions of likes and views. Teens have provided a major audience.

All patients in the recent lung-injury outbreak have a confirmed use of e-cigarettes and/or vaping products. Among those reported patients, 36% are 20 years or younger, prime age for social media use.

“I think social media has a big role on vaping, especially on the younger generation,” Piccolini said. “I have two younger sisters both freshmen in high school. They see their friends snapchats and private instagram stories of them vaping. Due to this, many of my sisters’ friends have hopped on the trend.”

Some health professionals now are responding on the same platforms. As vaping-related illnesses and deaths go up, some are taking to social media to influence people to put down their e-cigarette devices and seek help.

Dr. Rose Marie Leslie, a second-year resident in family medicine at the University of Minnesota Medical School, has become a social media sensation. Leslie took to TikTok to explain to teens not much younger than her the dangers of not knowing what you puff.

“There seems to be a lot of people who want health information and they’re not getting it at school or at home, so I saw [TikTok] as an opportunity to provide that,” Leslie told Rolling Stone.

Leslie quickly went viral, and her account dedicated to letting teens know the effects of vaping now has over 184,000 followers.

“Electronic cigarettes and vaping devices pose a significant threat to student health with misleading advertisements targeted toward middle and high school students,” the Olathe School District said in announcing its lawsuit. “It’s the district’s responsibility to protect its students.”

Juul has responded to the onslaught be saying its product “has always been only intended to be a viable alternative for the one billion current adult smokers in the world.” The company also announced that it would stop selling fruit-flavored e-cigarette products, which tend to be more appealing to teens, in the United States.

The financial fallout from the lung-injury outbreak has spread beyond Juul. Last December, tobacco giant Altria bought a $12.8 billion stake from Juul after its sales increased by 600% the year before. Since the outbreak of vaping-related illnesses and deaths, Altria has lost nearly $30 billion in market value.

Despite its plunging market value, Altria told CBS MoneyWatch the company continues “to believe in the harm reduction potential of e-vapor products for adults.”

Some local teens welcome the legal moves of recent weeks.