Muna Abdi sees the bewilderment in the eyes of newly arrived international refugees whose journey brings them to Kansas City.

They don’t know the language. They have no idea where or how to shop for food. Thermostats and many household appliances mystify them. Such things don’t exist in the tarped quarters of refugee camps.

Yet refugees in Kansas City swiftly adapt and find ways to give back to the community that receives them.

Like Abdi. She arrived here on refugee status just four years ago, a single mother with a young daughter to support.

Her journey began in war-torn Somalia and wound through Kenya, where she worked through an arduous vetting process.

“I was so happy when they told me, ‘you’re going to the United States,’” said Abdi, who as a child watched her mother die of malaria for lack of medical care. “Now my daughter has a future.”

All incoming families pass multiple background checks by the United Nations and U.S. agencies. Many have spent more than a decade in limbo awaiting their chance.

As recently as a few years ago, the three area agencies together welcomed nearly 1,000 refugees annually. That number has fallen sharply since Donald Trump has become president. His administration recently announced a limit of 18,000 admissions in the coming fiscal year.

Historically, the U.S. has led the world in refugee resettlement, with average annual admissions of 95,000. That is no longer the case.

Still, refugees have and will continue to become a vital part of the Kansas City region. They bring gratitude, optimism and talents rooted in their past and nourished on American soil.

“We certainly felt the responsibility of giving back and becoming part of America as soon as we could,” said Lidia Bastianich.

The name Lidia — chef, restaurateur, cookbook author and public television host — is well known in Kansas City. Her story as a refugee, less so.

Bastianich grew up in a part of Italy that was parceled out to the newly formed nation of Yugoslavia after World War II. She remembers happy days as a child spent on her grandmother’s farm, where she played among goats and rosemary bushes. But she also recalls fearful nights when police hauled her father away for stretches of imprisonment and interrogation.

Eventually she escaped with her parents and brother to Italy, where they spent two years in a refugee camp. Catholic Charities helped them resettle in New Jersey.

“I never forgot that I am who I am because somebody cared. Somebody helped,” Bastianich said.

Hanadi Almansour and her husband, Mohamad, feel that sense of gratitude acutely. Three of their five children have an inherited blood disorder. They require regular transfusions, which became impossible when Syria, their home country, erupted into civil war.

The family fled to Egypt and was accepted for resettlement in the United States in 2016. Since moving to Kansas City, two of Almansour’s children have received bone marrow transplants, with a healthy sister as their donor. The family is seeking a donor for a third child, as no one in the family is an acceptable match.

While Mohamad works at a Kansas City restaurant, Hanadi home schools her youngest child, whose immune system is still recovering from his bone marrow transplant in July. No longer focused on survival, she has begun to dream of a future. In America, the land of possibilities, she’d like to open a bakery.

For Engoma Fataki, who arrived in Kansas City with his parents and eight siblings five years ago, resettlement brought the chance to quench his thirst for education.

Fataki’s family fled war in the Democratic Republic of the Congo when he was an infant. They lived in refugee camps in four African nations.

“My entire childhood, it’s full of trauma,” said Fataki, 23. “We had to go hungry. We had to walk miles to go get water.”

When Fataki was 12, police arrested his father, a pastor, as he was preaching. “They surrounded the entire church and my father and other church members, they got arrested,” he said. “It was terrible. Those things still haunt me to this day.”

Fataki’s father, Fataki Mutambala, has continued preaching in Kansas City. He guides Yesu Ni Jibu, a congregation of more than 100 African refugees and is seeking a permanent location in the city’s historic northeast section.

While biding his time in refugee settings, Engoma Fataki did his best to learn some English. That, along with ambition, got him off to a fast start in America. After less than two years at East High School in Kansas City, he was admitted to Missouri Western State University in St. Joseph. He now serves as the student body president.

In making rapid strides, Fataki is following a formula that Hank Nguyen preaches to young immigrants.

“Go to school, get your education, be something” said Nguyen, who resettled in Kansas City in 1980. “This is your country.”

Like every refugee, Nguyen carries a burden of sadness. After being displaced from his home in South Vietnam in 1968, he was forced to participate in a bloody war in Cambodia, and saw more than 50 friends killed in combat.

Life in America brought sorrows, too. Nguyen lost his first wife in a traffic wreck. His second marriage ended in divorce.

But refugees of all generations are known for resiliency. Nguyen’s father, who never left Vietnam, set Nguyen up with a Vietnamese woman who became his wife. Two years ago, Nguyen and his wife, San, opened a popular Vietnamese restaurant, San’s Sandwiches, in Gladstone.

On certain occasions, Nguyen takes a break from dishing up servings of pho and banh mi sandwiches to treat his customers to a bit of karaoke. He especially enjoys a soulful rendition of “My Way,” the Frank Sinatra classic. It’s a quintessential American song, sung by a refugee who, like many, have become grateful Americans and enriched their communities along the way. 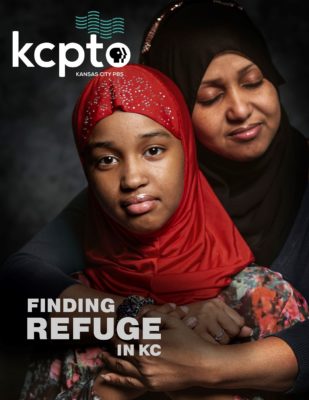 
—Flatland contributor Barbara Shelly is a freelance writer based in Kansas City.