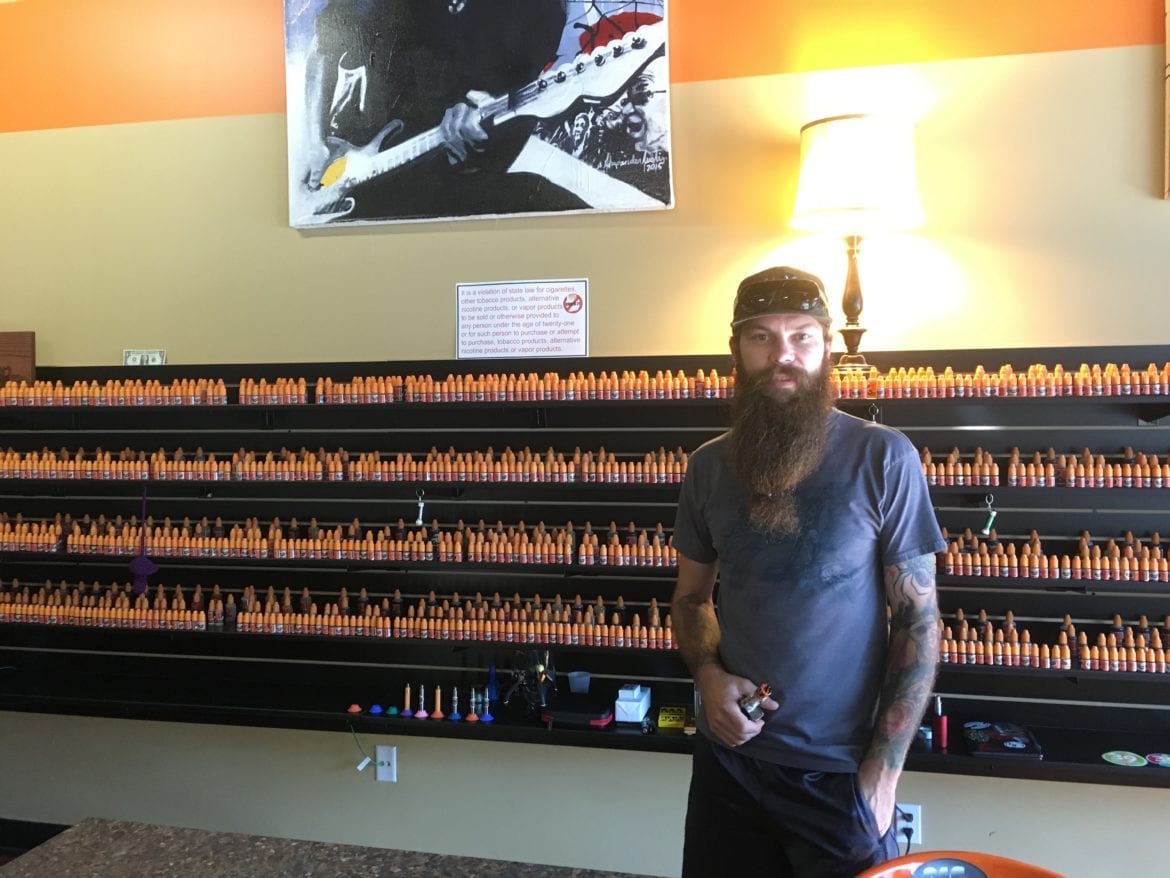 Standing behind the counter of a Midtown Kansas City vape shop, Billy Angus pondered the gravity of a new directive from Washington, D.C., aimed at an increasingly popular alternative to cigarettes:

“It’s going to cause most of the industry to go out of business,” said Angus, manager of 816 Vapor, which sits along 39th Street.

Electronic cigarettes are among a class of products known as electronic nicotine delivery systems (ENDS). They are typically composed of a simple battery and an atomizer– a self-contained heating element. The atomizer heats a flavored liquid, or “juice,” that contains nicotine, producing vapor instead of smoke.

Dissenting views about the regulation’s impact come from public health advocates, including the head of the University of Kansas Cancer Center, and from the federal Department of Health and Human Services, which issued the rule through the Food and Drug Administration.

In announcing the new regulation in May, HHS Secretary Sylvia Burwell called the move “an important step in the fight for a tobacco-free generation” and said it would “help us catch up with changes in the marketplace, put into place rules that protect our kids and give adults information they need to make informed decisions.”

According to the FDA ,16 percent of high school and 5.3 percent of middle school students were current users of e-cigarettes in 2015, making e-cigarettes the most commonly used tobacco product among youth for the second consecutive year.

The new rule, which took effect Monday, extends the FDA’s authority over tobacco products to include ENDS. The regulation implements the 2009 Family Smoking Prevention and Tobacco Control Act.

One of the most significant provisions requires companies to disclose the ingredients in their e-liquids and to reveal their manufacturing processes. In addition, the FDA will now test and approve the various components of the delivery systems, including the atomizers and cartridges.

The rule covers all products that have been on the market since 2007.

For retailers, the new rule prohibits them from selling electronic cigarettes to anyone under the age of 18. They will also be unable to provide free samples of e-liquids, a common practice among vape stores — and a big part of their customer service.

In an ongoing campaign, spearheaded by the Greater Kansas City Chamber of Commerce, various municipalities have recently raised the legal age of purchasing tobacco products to 21. The ordinances cover ENDS.

Manufacturers will have two years to submit their products for testing. They can still sell the products while awaiting FDA approval. 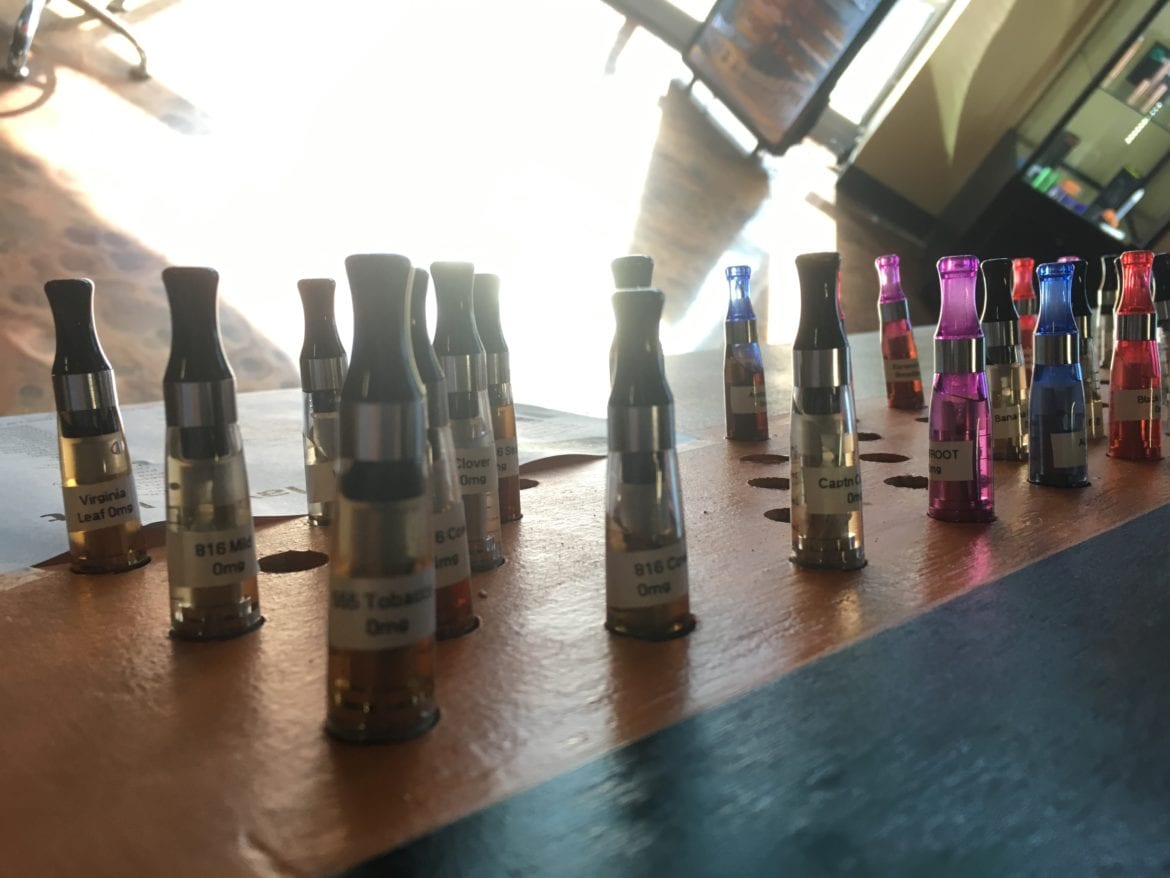 Critics have taken aim on the regulations on many fronts, including arguing that they infringe on their First Amendment right to market their product.

Detractors also argue that compliance costs will drive many small manufacturers out of the market. They view this as a way for Big Tobacco to promote their traditional products and their own e-cigarette ventures. The FDA estimates it will cost about $300,000 per product.

And finally, the vape community argues that the FDA has no business in this space.

“[Electronic cigarettes are] not a tobacco product,” said Paul Wilson, assistant manager of KC Vapes in Overland Park. “It’s being deemed a tobacco product and there’s no tobacco in it. It’s a nicotine product.”

“Americans can breathe a sigh of relief now that all tobacco products have the federal oversight they’ve needed for a very long time,” the AHA’s CEO, Nancy Brown, said in a news release issued when the rule was finalized. “All tobacco products present risk. That’s why it was absolutely necessary for the FDA to assert its authority over these products.”

Both 816 Vapor and KC Vapes produce and sell their own e-liquid, meaning each flavor and every nicotine level per flavor will require FDA approval.

816 Vapor only sells their own brand furthering the concerns of Angus, the manager, that the regulation will hurt his store unless they begin to carry “premium” e-liquid, which is more expensive than producing their own.

That’s a lesser concern for Wilson, in part, because KC Vapes manufactures its own e-liquids at a lab in Olathe, Kansas. So it can supply its retail shops and make money by selling the juices nationally and internationally.

Wilson also believes that the quality of their lab processes will stand them in good stead with the FDA.

“[The regulations are] going to stop new products from coming in, but it’s going to do that at every shop,” Wilson said. “The big thing is keeping the juices on your shelves.”

According to the FDA, consumer protection and the prevention of tobacco-related disease and death are some of the driving forces behind this new rule.

And that’s something that pleases Dr. Roy A. Jensen, director of KU Cancer Center, who argued that the regulations will provide baseline information to start examining the health impacts of e-cigarettes.

“E-cigarette users are involved in a big uncontrolled experiment,” he said, “and we have no idea what impact this is going to have on them.”

Angus had a different take.

“I don’t think [the regulations] protect customers at all,” he said. “In a sense, they’re going to smash most of the vaping industry out and those customers are going to go back to smoking tobacco products.”

— Brett Baker is the Scripps Howard Foundation Fellow at the Hale Center for Journalism. He is also the coordinator for “Common Grounds.” To reach Baker, email intern_hale1@kcpt.org.