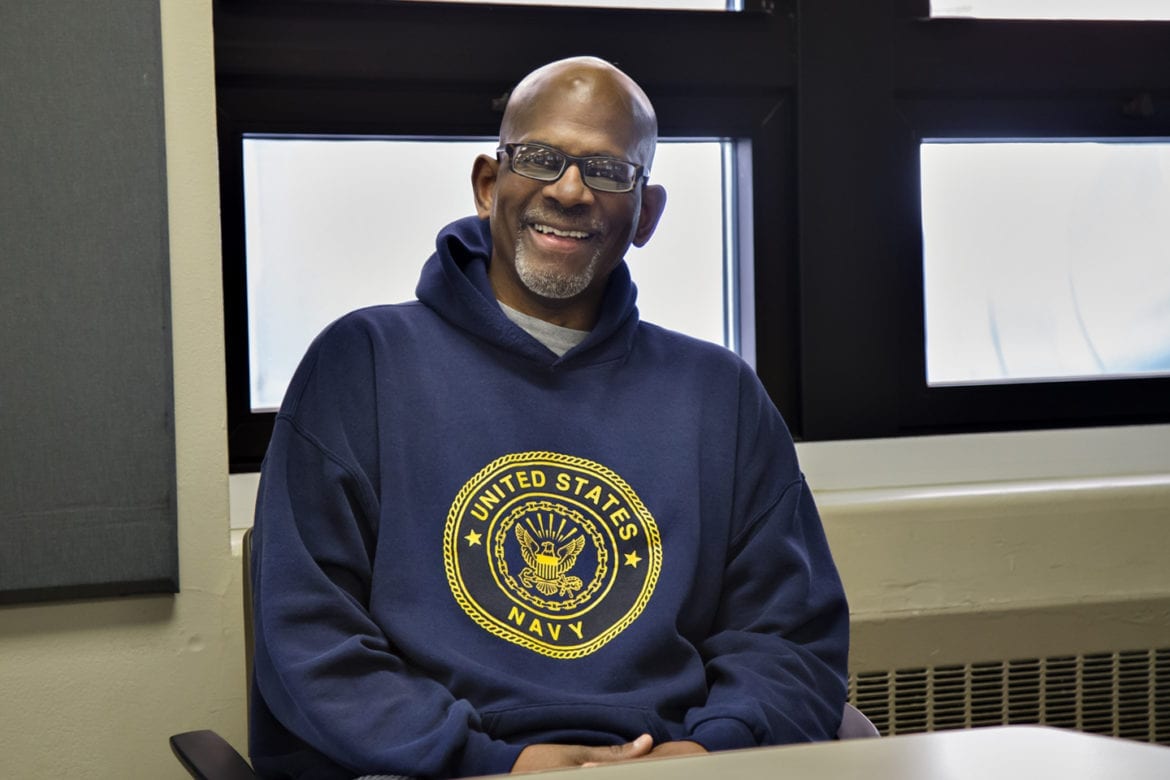 Lemuel E. Kimes, who retired in 1993 after a 21-year career in the U.S. Navy, is pictured here at the VA Medical Center in Kansas City, where he will help teach a new mental health course for veterans and their families. (Serena S.Y. Hsu | Flatland)
Share this story

Valetta Tsangaris met her husband, a helicopter pilot for the U.S. Marines, when she worked as an aviation machinist during Operation Desert Storm.

His tour continued after she returned home, but when he finally joined her, he was frequently angry, verbally abusive and struggling with post-traumatic stress disorder. They eventually divorced.

Tsangaris now works with families of veterans to help them avoid that same fate. Last year, the Joplin woman taught the first Missouri session of a new course, Homefront, offered by the National Alliance on Mental Illness.

These classes help family members of veterans and active service members who are battling PTSD, depression and other mental illnesses.

Missouri is one of about a dozen states offering NAMI Homefront courses, which typically run once a week over six weeks.

In addition to Joplin, the Missouri classes have taken place in Knob Noster at Whiteman Air Force Base and in the Ozarks at Fort Leonard Wood.

The first class in Kansas City is expected to be held at the VA Medical Center, 4801 Linwood Blvd, in February. It has been condensed into three Saturday sessions to accommodate families who aren’t nearby.

Tsangaris wishes she had had a similar opportunity with her marriage.

“I would have so much appreciated the fact that I wasn’t this horrible person for missing the man my husband used to be,” she said. “To learn to grieve for the person who left and how to get to know this other person who returned.”

Homefront was born out of one of NAMI’s signature national programs, Family-to-Family, which has been taught in Missouri since 1994.

It aims to help families and friends of people with mental illness understand the issue, gain coping skills, and advocate for their loved ones. Just shy of 500 family members take part in Family-to-Family each year in Missouri.

Cynthia Keele, executive director of NAMI Missouri, said the organization began receiving feedback from veterans’ families who were taking part: The class was helpful, but they wanted something focused on military culture and service. Homefront was created to accommodate these requests.

The classes are taught by veterans who have been through the process of dealing with mental illnesses or their family members. Flanked by volunteers, Heidi Custin addresses attendees prior to the inaugural 5K walk/run hosted in October by the Kansas City chapter of the National Alliance on Mental Illness. Custin and her husband, Joe, lost their son to suicide on Christmas Day 2015. (Courtesy of NAMI-KC)

When Lemuel Kimes joined the local board of the National Alliance on Mental Illness, he was surprised to find that the longstanding organization was in dire straits.

“What it felt like was being on a train that’s already left the station — and you don’t know what’s up ahead, but it is already rolling,” he said of NAMI-KC.

Though they are open to service members throughout the state, the classes thus far in Missouri have been held on or near military bases where clients have easy access to the program.

NAMI Missouri put a special focus on the Army Reserve and National Guard because those troops’ families aren’t always located on an installation or near resources like VA medical centers, said Michael Jones, a Marine veteran, NAMI Missouri board member and Homefront trainer.

The Missouri chapter also zeroed in on these families, Jones said, because guard and reserve members are coming home “stressed beyond our imagination.” These part-time troops are often overlooked when it comes to the mental health impact of service, he said.

But government statistics suggest there is a need for more help.

The Pentagon reported in 2011 that more guard and reserve troops died from suicide than combat, accidents or illness while deployed between 2005 and 2010.

Other Pentagon data found that, although active-duty personnel suicides were down between 2014 and 2015, reserve suicide rates leapt 23 percent during that same time. In 2015, 209 reserve troop members died from suicide, up from 170 the previous year.

“It probably hits them extra hard because deployment is not what they signed up for,” Tsangaris said. “The military is their second career. It’s not normal to go from working a bank teller to having to shoot people. Then we expect them to come back and jump into their bank teller job.”

Because the reserve and guard families are sometimes less attached to the military than traditional troops, the Homefront classes teach them about resources and services available from the VA and elsewhere.

Participants learn to recognize the signs and symptoms of mental illness and substance abuse and how to communicate with loved ones battling those issues. They learn to deal with a vet’s mental illness as a family — understanding that everyone has a role in getting the veteran healthy, Tsangaris said.

Families learn to give space and time to veterans who return from service and to recognize there will be an adjustment, both for veterans returning to work and kids, and the families who have lived without them for so long. Tsangaris said that veterans are undeniably changed when they return, but that it doesn’t mean things won’t eventually settle down.

There are many potential treatments for PTSD, so families learn about different therapies, medications and their side effects.

Most importantly, participants realize that others are going through similar issues. They don’t have to feel ashamed or embarrassed because they are mad at the military that took their family member or angry with the “hero” who has returned from war, Tsangaris said.

“They cry, they get angry, and then they hear someone else saying their spouse was doing it too, and it was incredible because they don’t feel alone anymore,” Tsangaris said. “They are able to get out their feelings and know it doesn’t make them a bad spouse to feel that way.”

—Tammy Worth is a freelance journalist based in Blue Springs, Missouri. Find more stories like this on FlatlandKC.org.