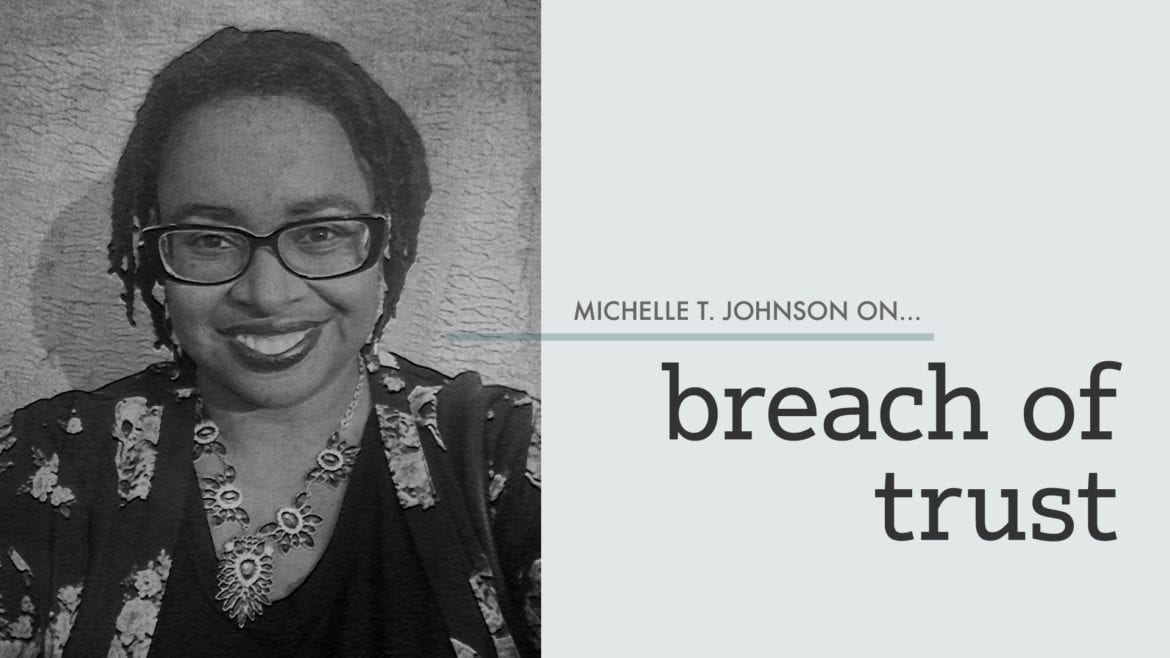 Recently on Facebook, a friend asked the question of what people thought about a woman’s mother maintaining a friendship with the woman’s emotionally abusive ex-husband.

As you can imagine, the question elicited a range of opinions. But one of the overwhelming themes of the comments was that of loyalty and trust. The question of how can someone who claims to have a loving, lifelong relationship with you give aid, comfort, and support to the enemy?

And make no doubt about it – that’s what it has come down to with Donald Trump. He’s an abuser.

I’m not a politician. I’m not Michelle Obama. The sentiment from her Democratic National Convention speech is admirable: When they go low, we go high.

Donald Trump is an abuser. Since his supporters claim to love straight talk – he is emotionally abusive. And every single person who supports him – let alone elevates him – is a co-conspirator.

No one is forgetting when this is all over. Not one friend. Not one relative or in-law. Not one co-worker.

That’s not a threat of retaliation. Or of street justice. Or of social vigilantism.

No, it’s a promise that the breach of trust – already fragile for many groups – has disintegrated. And this is regardless of the election’s outcome.

Be clear, not one word I’m writing is backhanded support for Hillary Clinton. This has nothing to do with her.

Yes, Trump recently took a major public hit for his sexist comments caught on video from 11-years-ago. He had made awful, misogynistic comments before, so, these weren’t new revelations. His saying “grab ’em by the pussy” shouldn’t have been a shocker. He doesn’t shy away from making comments where he unrepentantly denigrates women by their appearance and has been accused of sexual assault. Abusive.

He has talked horribly about Mexicans, about building walls, about blanket deportation. He uses the words “rapists” and “murderers” to smear the undocumented immigrants who seek the same opportunities generations of Americans have always sought when coming here. He insults a federal judge by questioning his objectivity on a lawsuit he presides over, saying that because the man is of Mexican descent, he can’t be objective. Abusive.

We have millions of people law-abiding Muslims who live in America, but he believes the threat of Islamic terrorism justifies painting them all with the same brush. He essentially wants a loyalty test. He can insult repeatedly the family of an American hero – who is also Muslim – because the parents who had to bury their son called Trump out. Abusive.

Even the war heroes of Trump’s own party aren’t immune. He says of John McCain, a prisoner of war in the Vietnam War for more than five years, that he wasn’t a war hero because he likes people who weren’t captured. He pretty much says that any veteran suffering from post-traumatic stress disorder is weak. Abusive.

The point is that all the people, especially now as we close in on Election Day, who continue to support his defiant and open hatefulness don’t get to call a mulligan. We can’t unring this cultural bell.

This is a man endorsed by the Klu Klux Klan, an endorsement he didn’t bother distancing himself from. My grandmother, who has Alzheimer’s disease, would be offended by that fact alone if some miracle brought her mind back to us for just one day.

Some supporters may genuinely believe they are supporting his positions because they are worried about jobs and trade agreements and national security. I know some good people who have expressed that.

But a candidate who supported all those issues without brutalizing and abusing large segments of our society could have been found.

Every time I see strangers on social media make out like Trump is the greatest thing since the microwave oven, I cringe. I get downright depressed when I see friends of my Facebook friends comment and try to extol his virtues. One man recently posted, Donald Trump is a “great” man. I didn’t bother replying, yes, if you’re not female, a person of color, a veteran, a Muslim, a person with a disability, a member of the LGBT group or anyone else who disagrees with him.

And just like the mother who is nice to the abusive ex-husband, don’t be surprised with that painful breach of emotional trust comes to an explosive head at the holiday dinner.

Failure to disavow yourself from a man who is gleeful in his open disrespect of other people, isn’t merely a difference of political opinion at this point.