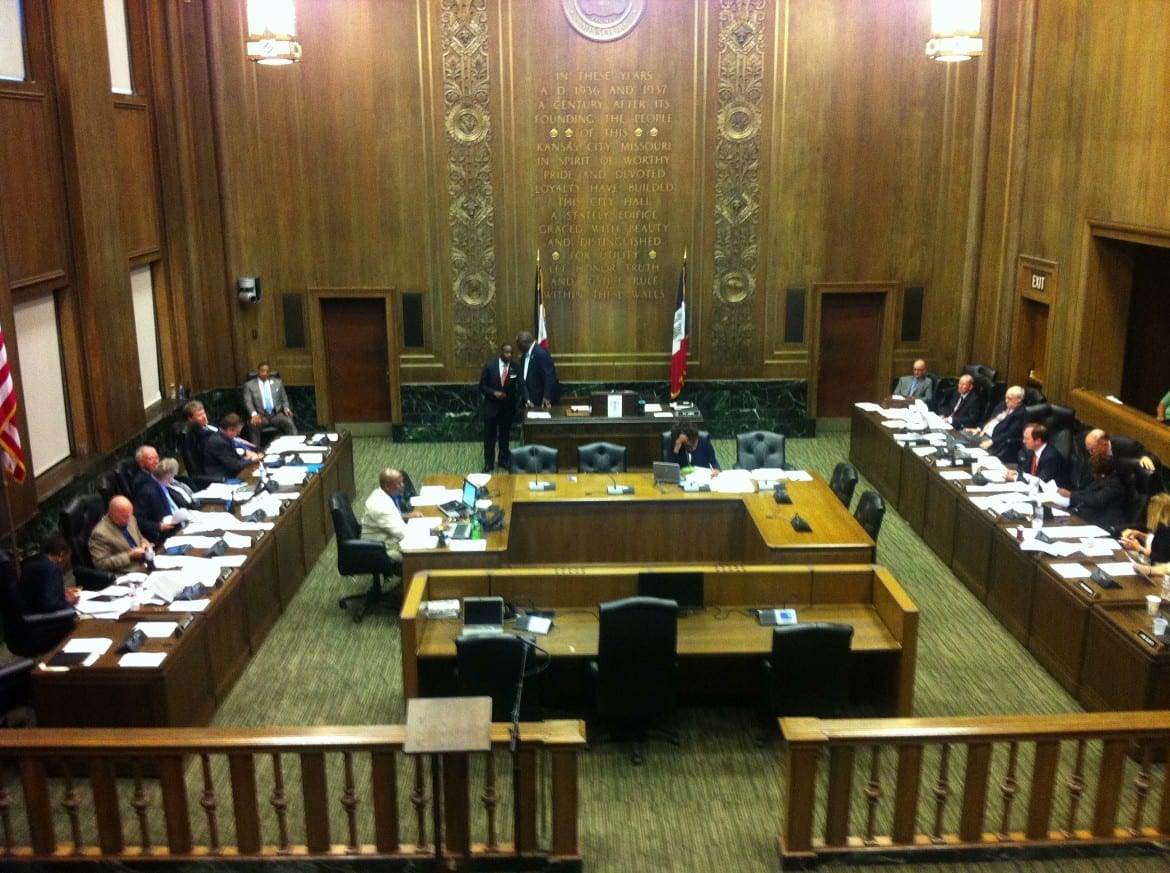 The City Council moments before voting on the Minimum Wage Ordinance. Photo by: Daniel Boothe
Share this story

Kansas City’s decision to raise the minimum wage is a bid by council members to take a stand for low-income working Kansas Citians and to be “on the right side of history,” even as council members acknowledged the legal onslaught that may be in store.

In defiance of Missouri legislation banning cities from raising the minimum wage, Kansas City’s Council members Thursday afternoon passed a citywide ordinance that would raise the city’s minimum wage, in gradual increments, to $13 an hour by 2020.

The city council voted by an overwhelming 12-1 in favor of the minimum wage increase, with Mayor Sly James casting the final vote.

James, prior to casting his vote, told council members that despite the probability of potential lawsuits, being vetoed by state government, and that passing the ordinance does not fix the problem of wage disparity, as mayor he felt it was the council’s moral responsibility to act.

“But that still has consequences,” he said, alluding to the probable legal battles the city will face in order to see the ordinance go into effect in August.

Supporters of the minimum wage increase erupted in cheers at Thursday’s council meeting when James cast his final vote and declared the ordinance had passed.

While seen as a huge victory for groups like Stand Up KC and Fight For 15, council members conceded that putting the ordinance into effect is just the beginning of an uphill climb.

Currently, Missouri HB 722 states that a “city within the state would have no power to institute its own ordinance on minimum wage.” The legislation goes into effect August 28th.

Councilman Ed Ford, the only member of the council to vote no, said his concern with passing the ordinance was the possibility it would be overturned.

“I don’t want to give all of these people out here false hope,” Ford said, just before the vote took place.

He also warned that if the ordinance was passed, the city council had better be ready for a tough fight.

“We, the city council, will bear the brunt of all lawsuits and legal shenanigans,” he said.

However, many council members argued that regardless of what the future may hold for the measure, it is important to make a statement that Kansas City is on the right side of history.

Councilman Scott Wagner said despite the fact the council likely will be sued, it was important to symbolically “take a stand.”

“Is this one of those times we make a statement?” he said. “I believe it is.”

Mayor James agreed. He said passing the ordinance was more about sending a message to legislators in Jefferson City, and to show support to minimum wage earners.

“A city divided can not stand,” James said. “We are one city, we are Kansas City,” he said.

“Why are we doing this? Because we have a moral obligation to do so,” he said.