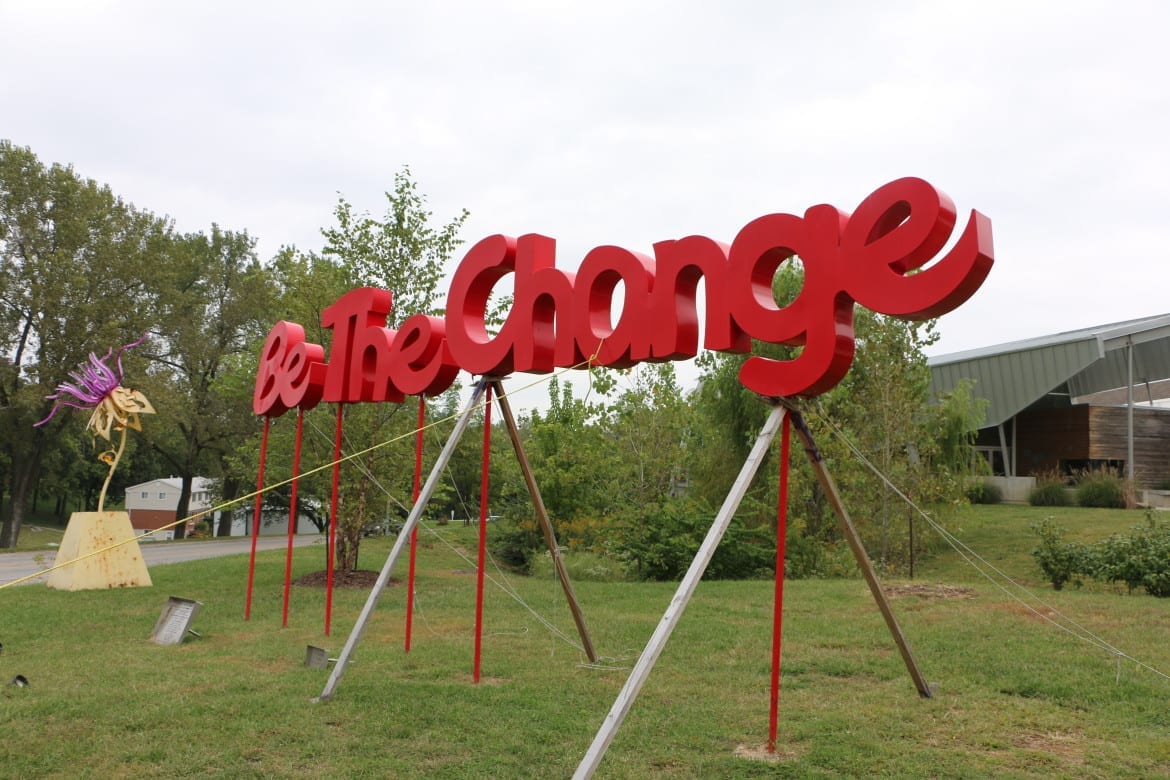 Art and inspiration combine in a piece that sits on the grounds of Synergy Services' Youth Resiliency Center in the Northland. Synergy Services administrators are leading proponents of a sales tax increase to help at-risk youth in Jackson and Clay counties. (Photo: Mike Sherry | Flatland)
Share this story

Jackson and Clay counties are hoping to join a handful of Missouri municipalities that have enacted a local tax to fund services for at-risk children and youth.

The Jackson-Clay Children’s Services Fund Committee is hoping that voters will enact a quarter-cent sales tax that the committee estimates could generate as much as $40 million in both counties combined for children up to age 19.

The Missouri statute that authorizes establishment of such funds allows the money to be used for a range of services, including up to thirty days of temporary shelter for abused, neglected, runaway, homeless or emotionally disturbed youth. Other permitted services include outpatient chemical dependency and psychiatric treatment, home- and community-based family intervention programs, and crisis hotlines.

“I think we are really committed right now. It’s not fair to the kids in our community not to try.” — Robin Winner, a leader of the Jackson-Clay children’s tax campaign

The committee hopes to have the question on the November 2016 ballot in both counties, a time that could prove to be loaded with proposed tax increases for kids. One would increase property taxes in the Kansas City school district for universal pre-kindergarten. Another would hike the state cigarette tax for early childhood health and education programs.

But while supporters of those initiatives have already mounted public campaigns,  the children’s services fund committee has been working more in the background.

“We are really not thinking of it as a campaign,” Winner said. “We are thinking about it more as community education to help convey to the public that this is a need.”

She said the idea came about as a result of work by the Homelessness Task Force of Greater Kansas City, a project of the Mid-America Regional Council.

That includes a June 2014 report, produced by the University of Missouri’s Institute of Public Policy, which concluded the region had $149 million in unmet needs for at-risk children and youth.

Overall, according to the report, providers of services to at-risk children, youth and families in the Kansas City metropolitan region served more than 285,000 children in 2013 but had to turn away about 21,000 more due to lack of capacity.

The greatest unmet need was for services targeted at children who live in out-of-home placement or in single-parent homes, according to the authors.

At Synergy, Winner said they have noted an acute need for transitional housing that stabilizes homeless youth so they can get on track with school and preparation for life as an adult. Synergy has had 20 apartments for that purpose during the past year, she said, and it had to turn away nearly 180 kids because of lack of room.

Part of Kansas City’s fast-growing region north of the Missouri River, Clay County is not generally identified as a high-need area akin to Jackson County, which includes the urban core of Kansas City, Missouri.

But Clay County clearly stuck out as an area of concern in last year’s report, Winner said.

According to the report, the number of Clay County children eligible for free and reduced lunch increased from 11 percent to 35 percent between the 2000-01 and 2010-11 school years.

More school-based mental health services would be high on the wish list for Tom Petrizzo, if Clay County established a children’s services fund.

There’s no shortage of need in Clay County, he said. “It is unfortunate,” he added, “but I guess it is also an opportunity.”

This is not the first time area social service agencies have considered establishing children’s services funds in the Kansas City area, Winner said. But every time it has come up, she said, other matters have seemed to take precedence.