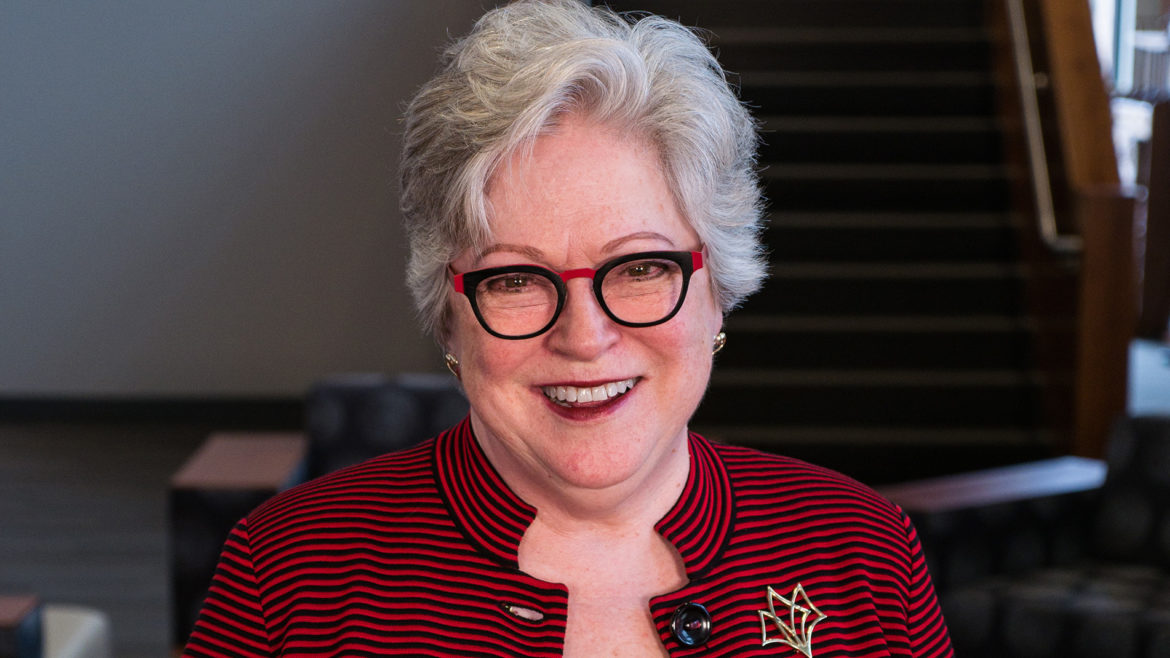 When Molly T. Marshall became president of Central Baptist Theological Seminary here in 2004, this was the inside joke among board members: “We flipped her the keys to the Titanic.”

No wonder. The American (not Southern) Baptist school, then at 31st and Minnesota in Kansas City, Kansas, was broke, physically falling apart and down to only 78 students.

Marshall, now starting her final academic year before retiring, recalls: “What we faced at the old campus was $17-18 million of deferred maintenance. We faced armed robberies on campus. We faced a dwindling student population with about seven students to one faculty member. That was not sustainable. Our endowment had been basically bled out and it was underwater. If we stay, we probably die. If we move, we have a shot at continuing our mission.”

For starters, the school released four of its 12 full-time faculty members and cut half (eight) of the rest of its staff. It also declared “financial exigency,” a euphemistic term for bankruptcy. Then it began to imagine a new future.

“It was very difficult to think about leaving KCK,” Marshall says. “And I knew that we would get criticism for leaving the urban area. But it was absolutely necessary.”

So in 2006 the campus moved to 6601 Monticello Road in western Shawnee, Kansas, and — with financial help from a family foundation and a going-out-of-business St. Louis church — essentially started over.

“I didn’t really begin to breathe for another year,” Marshall says. “Then we began to gather some momentum in terms of financial support.”

Today Central has been resurrected.

It has 530 students at 11 locations here and outside the U.S. That number includes 140 Korean students at a Dallas location. Their learning is guided from a Korean center at the Shawnee campus. In addition, the school runs a Doctor of Ministry degree program in collaboration with the Myanmar Institute of Theology in the country formerly known as Burma.

The full-time faculty now is 14 with more than 120 supplemental teachers. And Central isn’t broke.

How did all this happen?

“When I became president, I became very attentive to the fact that we were going to have to rework this school,” Marshall explains. “It will take money and it will take new friends. So I set out to do that, to tell a story of resurrection. But with resurrection, some things have to die.

“Residential theological education had to die for us. Chapel three times a week had to die. Every class face-to-face, every class during the day when it’s easier for professors to teach rather than at night required a death of professorial preference.”

So now there are evening and weekend classes and what the school calls “technologically enhanced” (online) learning, which Marshall insists are “not correspondence courses.”

In this renewal process, Marshall picked up many skills (such as fund-raising) that she didn’t have when she became president.

In some ways, the story of Central’s recovery is no surprise to anyone familiar with Marshall’s personal history. She grew up in a competitive Southern Baptist family with two brothers and played a pretty mean game of tennis. Later, while teaching theology at Southern Baptist Theological Seminary in Louisville, Kentucky, she ran into a buzz saw of criticism primarily because she was an academic leader in a denomination that historically has had little use for women in such roles.

“I had my spine stiffened in doing some battle with Southern Baptists,” she says. “Part of your character is forged with what you have faced and in learning some resilience. Ultimately they would not tolerate me staying there.”

So she moved to Kansas City, left the Southern Baptist denomination and began teaching at Central nine years before she became president.

Has being female been a burden in her current role? No, she says: “I think it’s been a benefit at every turn. I’m used to being the first (woman in this or that role). I saw it as an asset I could use.”

Among the ways Central is different now is that most of its students no longer are American Baptists and many aren’t aiming at parish ministry. Today, Marshall explains, “we say we are Baptist in heritage and widely ecumenical.”

As I explained in this Flatland column, seminaries have been a significant part of the Kansas City region, but they’ve faced many challenges as the American religious landscape has shifted.

Seminaries Part of Metro’s Secret Sauce Religion in the United States has been in transition for decades, as the percentage of the population identifying as Christian shrinks — and particularly as the religiously unaffiliated population has exploded to nearly 25 percent. The effects have rippled through…

And yet, as Central has shown under Marshall’s prudent guidance, there is a way to succeed in this important field.