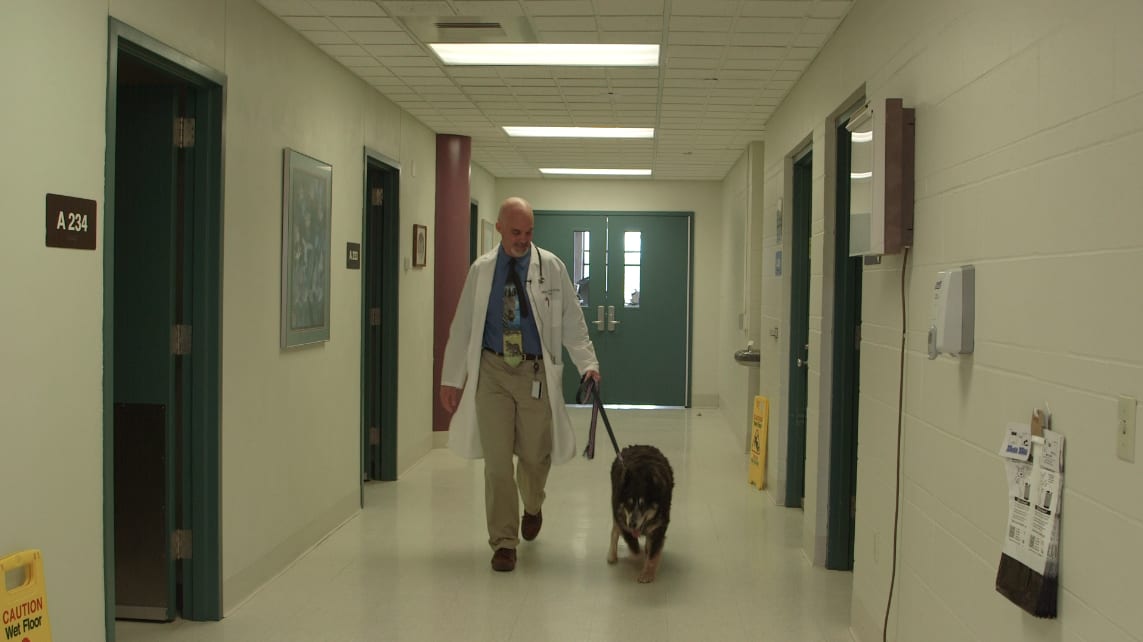 If you have cancer and your dog has cancer, it turns out you may be treated with the exact same drugs.

An innovative initiative at the University of Missouri combines traditional cancer research and care with veterinary medicine. This benefits our canine friends and, ultimately, human cancer patients.

Dr. Carolyn Henry, a veterinary oncologist at the University of Missouri veterinary school, said — unlike lab mice — dogs get cancer naturally just like humans. Their cancers are more likely to behave like human cancer when treated. Susie, a patient at the University of Missouri veterinary school, is being treated for a possible bladder tumor.

At the University of Missouri animal hospital in March, veterinary oncologist Dr. Jeff Bryan treated a 13-year-old dog named Susie for a possible tumor in her bladder.

He said our pets face the same environmental risk factors for cancer that humans do.

“They have all the same exposures that we have in our lives,” Bryan said. “They breathe our air, they may breathe our cigarette smoke. They live in our houses, they drink our drinking water.”

Thanks to an initiative called One Health/One Medicine, university researchers and doctors are working together to develop new treatments for cancer. Some of the drugs, like one called Quadramet, were developed at the university’s nuclear research reactor.

David Robertson, the reactor’s associate director of research and education, said timing is crucial while working with radioactive isotopes that break down over time.

“If I make Samarium 153 in the reactor on Monday, by Wednesday, half of it is gone,” Robertson said. “By Friday, I only have a quarter of it left. If I’m going to use this radioactive material in new drug development for something that has a half-life that short, it’s very convenient to have the vet school, the med school, the chemistry and isotope production all located on the same campus.”

Quadramet was tested first in dogs at the university’s veterinary school. Because dogs age much faster than humans, their cancers also advance much more quickly. That means if you’re a clinical researcher, you’ll see results sooner.

“What you would see as a five-year survival success rate in people would probably correlate to a one-year survival rate in a dog, so we definitely get our answers more quickly,” Henry said.

Bryan said pet owners who have been touched by cancer themselves are often the ones to seek more experimental treatment for their pets.

“They have a really personal motivation to try and help their animal,” Bryan said. “And those are often the patients we see in clinical trials because they want the cancer their animal has to be meaningful in the whole large scheme of fighting cancer.”

Here, Bryan is echoing something oncologists frequently say: that clinical trials are key to innovation in cancer research — both for humans and for our dogs.