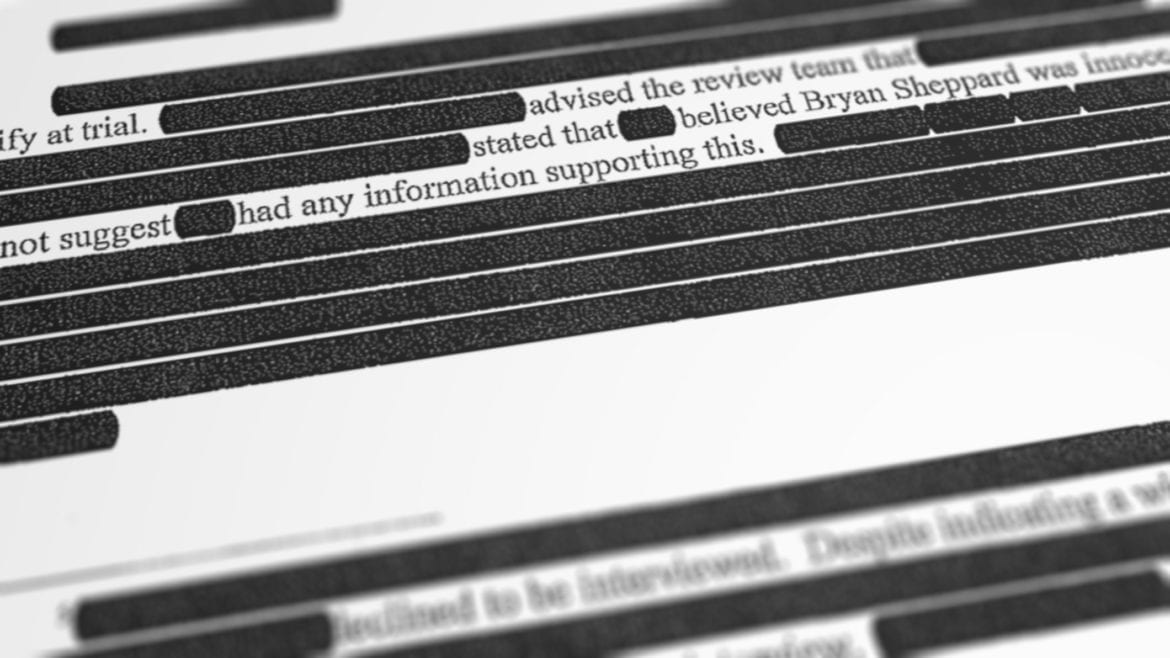 A portion of the Justice Department's 2011 internal review of the investigation surrounding the explosion death of six Kansas City firefighters. The entire report is heavily redacted. (Department of Justice 2011)
Share this story

In 1997 Bryan Sheppard was sentenced to life without parole for the deaths of six Kansas City firefighters. Although he and the other four defendants have always maintained their innocence, they have lost all of their appeals and are considered guilty of the crime in the eyes of the U.S. judicial system. All five were set to spend the rest of their days in federal prison.

But in 2012 the Supreme Court ruled that convicts who were minors at the time of their crime could not be given mandatory life sentences, and in 2016 the court clarified that the ruling would be retroactive. Bryan, who was the only defendant under 18 at the time of the explosion, has been granted a new hearing. Next Wednesday, Bryan will stand before a judge and be subject once again to our nation’s rule of law.

It would be easy to believe there are simply two sides to this story—right and wrong, true or false—and the judge will rule in favor of which side he finds more compelling. On Bryan’s side, his attorney will argue that, setting aside the question of innocence, Bryan had a troubled childhood that paved the way toward a life of crime. And yet his prison sentence has been one of rehabilitation and transformation. Bryan was a troubled teen, but he has served his time and should be released immediately.

On the other side, the government will argue that any evidence of Bryan’s rehabilitation is a moot point if he does not admit guilt. The government stated in its sentencing memo on February 6 that “if a defendant denies the existence of his crime, then his supposed rehabilitation is just a catalog of his activities, not a demonstration of his reformation following the offense.” As such, the government will argue that the judge should uphold Bryan’s current sentence of life without parole.

As recently as this week, Sheppard’s attorney has continued to refute the government’s objection to presenting evidence of innocence, stating “Mr. Sheppard has a due process right in this sentencing proceeding to explain or deny the Government’s assertion that his failure to accept responsibility is evidence of irreparable corruption.”

But there’s something missing, one omitted piece of information whose absence will hover in their air during the resentencing hearing next week: the one document that could actually help prove Bryan’s innocence.

In 2011, the Justice Department conducted an internal review of the entire investigation and trial leading up to Bryan’s conviction, and released a summary report to the public. Although the report maintains that Bryan and the others were responsible for the crime, it also identifies two additional suspects the government believes assisted in setting the fires that killed the firefighters. One problem: the entire report is heavily redacted, and the names of the new suspects are blacked out.

During his years reporting for the Kansas City Star, Mike McGraw repeatedly requested a copy of the full report and asked for interviews with the Justice Department, simply trying to understand why they would not pursue charges given the grave nature and significance of this case in Kansas City. Bryan’s attorney, Cyndy Short, also repeatedly requested a copy of the report, arguing that if the court insists Bryan is guilty, then surely this document would help shed light on Bryan’s level of involvement depending on who these additional suspects turn out to be. Finally, there has been a public petition over the past year, organized by myself and other citizens, insisting that it is in the public interest for the case to be reexamined if there are still two people walking free who are responsible for the deaths of six firefighters.

As a federal prosecutor and U.S. attorney in the Justice Department, Paul Becker can access the document, and for five years his team has had discretion over choosing to pursue charges against new suspects in this case. And yet, he has taken no action. Becker continues to argue that Bryan’s refusal to admit guilt robs the firefighters families of complete closure. And yet, Becker conveniently ignores his own responsibility to bring all evidence to light. If he knows for certain Bryan is guilty, what does he have to lose in releasing the un-redacted copy?

The government has the power and privilege to act as though all could be made right if only Bryan would admit guilt. Bryan’s attorney has the difficult task of asking for the court to reduce Bryan’s sentence based on his level of culpability as a troubled youth, whether or not he committed the crime. Both sides would benefit from the release of that document, as would the integrity of our justice system.

But without bringing the un-redacted report into next week’s hearing, this creates a logical trap for the judge, and the final decision falls squarely on his shoulders. How do you re-sentence a man who is convicted as guilty in the eyes of the court but might actually be innocent? Without that un-redacted report, the judge will require an imaginative leap to avoid that trap. But justice should be built of stronger stuff than the imaginative leaps of one man.

— Andrew Johnson is a freelance writer, speaker, and community activist in Kansas City. You can find his work and contact info on his website, www.suchsmallhope.com.

— Editor’s Note: Andrew Johnson is on the witness list to testify on behalf of Bryan Sheppard.