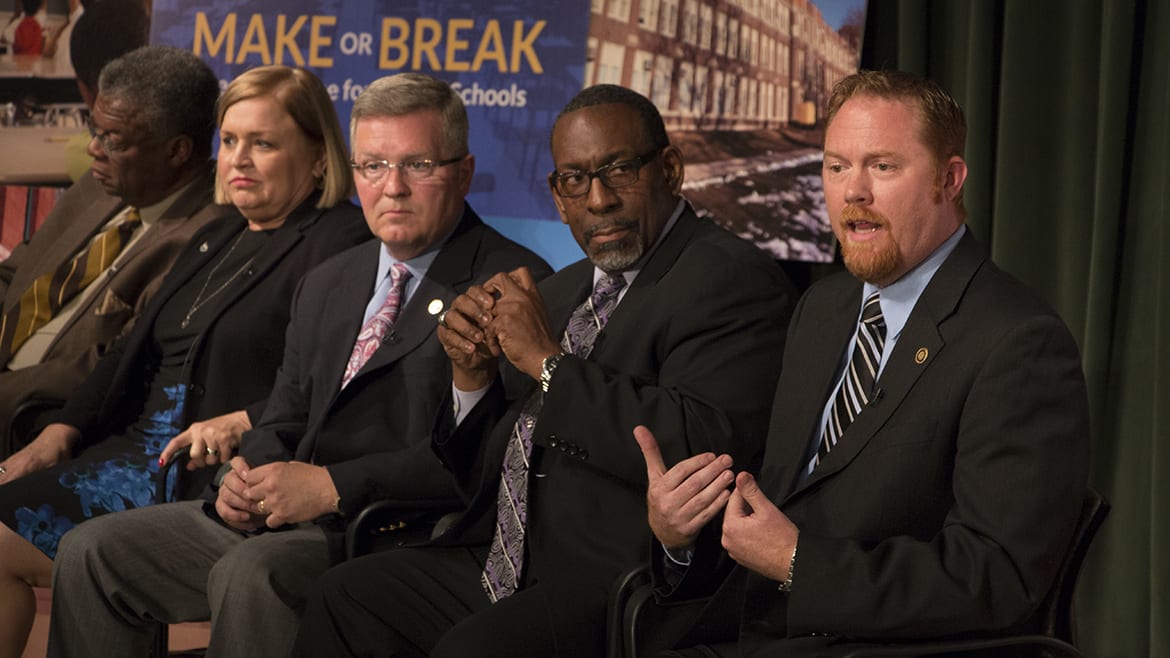 Much of the discussion focused proposed legislation to address the 1993 Missouri School Transfer law, which requires unaccredited school districts to pay the tuition and transportation costs for students transferring to a neighboring district.

“This is supposed to be the biggest issue of the Missouri legislative session; that’s what we were told back in January,” Haines said at the beginning of the program. “But, at one point, critics were arguing that why do we need to fix this law at all? If school districts are not being academically successful, why shouldn’t a student be able to seek out a better education in a neighboring district?”

A bill sponsored by Senator Pearce would address transfers costs, accredit individual schools instead of districts as a whole and a controversial provision allowing transfer dollars to go towards tuition at nonsectarian, private schools.

This controversial measure caused Holsman to withdraw his support for the bill.

“Private schools are a great option for some families, and for that option to exist I think is appropriate,” Holsman said. “The bottom line is that private have admission standards. They don’t have to take all children, and public dollars are there to educate all children.”

Nicastro said that she was worried that the bill may not make it through the legislature because of the divisive nature of anything resembling school vouchers.

As part of the forum, Haines also incorporated questions submitted through KCPT’s Public Insight Network and took questions from the audience.

One of the final questions came from KCPS teacher Nadia Nibbs about specific plans regarding accrediting each school.

“Tonight I was really expecting some clear, concrete answers. Like what can we expect from our district in the next two to five years? What are some of the plans?” Nibbs said. “I mean, as much I as I love to hear hope for the best, (I) want to hear a plan for the worst.”

Fellow attendee E.B. Wiltz, who has worked with the KCPS’ District Advisory Committee, said that he doesn’t see a commitment or process to address success at the individual student level.

“I think we’re still dressing the windows,” Wiltz said. “We have several opportunities to assess our progress … To say that all of the sudden you have 11th and 12th graders that can’t read even at the 5th grade level is unconscionable to me because we have all these incremental assessments during the year. Grade to grade, teacher to teacher, that type of accountability has to be put in place.”

An edited version of the forum will air on KCPT as part of an hour-long special Thursday, April 24 at 7 p.m.