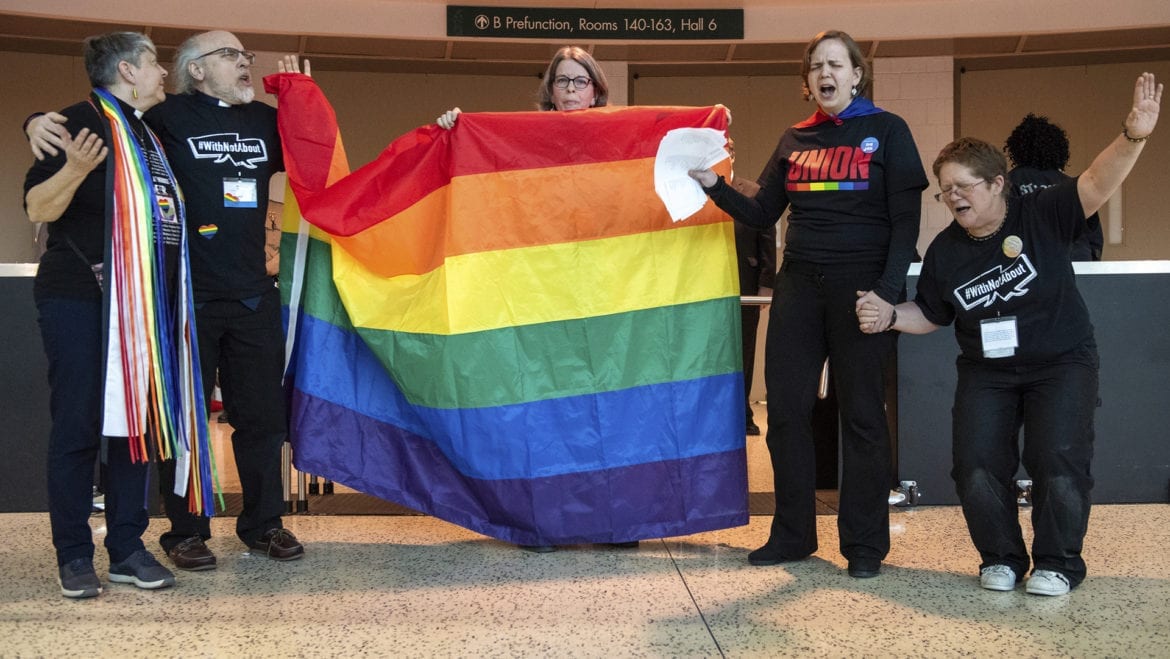 Protesters objecting to the adoption of a platform rejecting same-sex marriage and ordination of LGBT clergy gather outside the United Methodist Church's 2019 Special Session of the General Conference in St. Louis, Mo., Tuesday, Feb. 26, 2019. (Sid Hastings | AP))
Share this story

Right after a governing body of the United Methodist Church  in February approved keeping the denomination’s ban on gay clergy and on any clergy officiating at same-sex weddings, the Rev. Tex Sample was indignant and defiant.

He told worshippers at Trinity United Methodist Church in Midtown Kansas City that their historically gay-friendly congregation would follow “a strategy of refusal and resistance. We’ve got to refuse to abide by this decision and we will resist it.”

Like Trinity, other area Methodist churches are having to decide whether they can stay in a denomination that treats LGBTQ people as second-class citizens.

But congregations that identify as “reconciling,” meaning gay-friendly, first are awaiting the results of a four-day UMC Judicial Council meeting that begins Tuesday, which will decide whether the February vote was constitutional and whether all the voters were legally authorized to cast ballots.

But they’re also waiting to see what the Rev. Adam Hamilton and his 22,000-member Church of the Resurrection (COR) in Leawood plan to do. Hamilton opposed the so-called “Traditional Plan” that was adopted by a narrow margin with strong support of Methodists from Africa. Instead, he backed the “One Church Plan,” which would have allowed local autonomy on the LGBTQ questions.

“I was hopeful for the One Church Plan,” the Rev. Keith Morgan of Country Club United Methodist Church told me, “and naively thought it was going to pass — and was really shook when it did not.”

But, he says, “At this point it’s ‘let’s see what happens and let the dust settle.’”

That’s also the approach being taken by the Rev. Steve Jones, who pastors both Keystone (in Waldo) and Revolution (in Midtown) United Methodist churches.

Some churches, Jones told me, “have fallen into the trap of saying everybody is welcome. In some ways what that really means is that you’re welcome to come be in worship with us and sit in the back and we’ll greet you, but you’re not going to be in leadership and you’re certainly not going to work with our kids. And I think that’s a very dangerous place to be. That seems like a bit of an affront to God.”

While Sample and Trinity wait to decide what to do, he is expressing anger and disappointment with his denomination. He calls the 53-47 percent vote for the Traditional Plan “a coercion of conscience.” And he says that the people who voted for that plan are not traditionalists.

“They are right-wing reactionaries,” he said. “To take the position that they’re taking on homosexuality today is like being a flat-earther or someone who still believes in the superiority of men over women. And I think we’ve got to start talking about them that way. I’ve listened to these people since 1967. That’s 52 years. They don’t have another idea. And it’s bigotry. They are bigots. That’s where I am now.”

He says, correctly, that there’s no persuasive biblical case to be made against homosexuality.

Morgan, too, is upset at his denomination and at how some members of it treated Hamilton and his effort to find a compromise.

“I was very surprised at how much they attacked people, particularly people like Adam Hamilton,” he told me. “He was well liked and strongly supported and really lifted up as a shining bright star. The man is amazing. When he took that (One Church Plan) position, all of the sudden he was the devil.”

As Methodist congregations here and around the U.S. try to figure out the future, they already face distress among members.

“I’ve lost one gay man who was not a member yet but was active and sang in the choir,” Morgan said. “He just couldn’t take it. He was heart-broken. He said he just couldn’t be a part of what’s happened.” Beyond that, he said, “several people already have said, ‘I want all my money to stay local.’”

So Country Club plans to pay attention to its own neighborhood: “We’re going to focus locally until something new emerges,” Morgan said. “We can do here what we know God is calling us to do.”

The denomination’s anti-gay stance also may affect other organizations connected to the denomination, including St. Paul School of Theology, which is based on COR’s Leawood campus. Sample will become the head of the St. Paul board later this year but is confident that the seminary will continue to accept any students regardless of sexual orientation.

The Methodists’ bigoted, if narrow, decision to exclude full participation of LGBTQ people has placed the denomination on the edge of schism, meaning that in one way or another the trauma now reaches all of the roughly 40 UMC congregation in the Kansas City area.