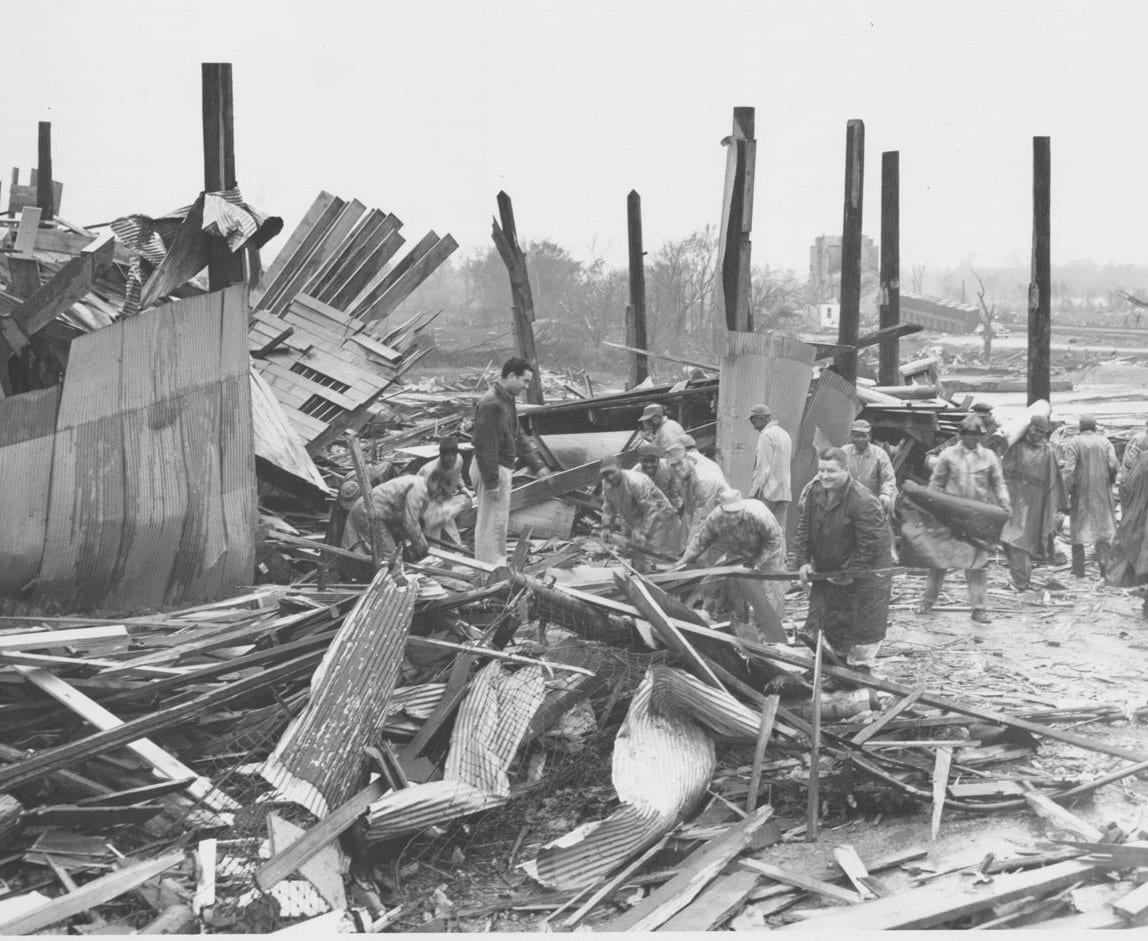 But even so, when the south Kansas City man hears reports of a funnel cloud, six decades melt away, and an instinct kicks in.

“Every time I hear a tornado warning,” he said, “I go looking for a shovel to dig myself a hole.”

Farris, like his wife, Cheryl, grew up in the Ruskin Heights neighborhood, so he can be excused his idiosyncrasy.

Both were children when one of the most powerful tornadoes on record in the United States flattened much of their neighborhood on May 20, 1957, killing at least 39 and injuring 531. The tornado was on par with the 2011 tornado in Joplin, Missouri, and the one four years earlier in Greensburg, Kansas.

And it is only fitting that a storm of such ferocity would leave a longstanding legacy on many fronts, not the least of which is the indelible mark it left on the Farrises and other survivors.

The tornado also provided the first glimpse of the resiliency that has come to characterize the Ruskin Heights neighborhood, which actually was at the end of a storm path that started that Monday afternoon about 70 miles southwest of the metropolitan area in Williamsburg, Kansas.

And Now For the Weather

Yet the tornado’s biggest impact may well have been the ushering in of a new era of tech-driven television meteorology in Kansas City.

That’s because — after specific tornado warnings broadcast that day over local television and radio — pressure grew for severe storm warnings to be more commonplace.

The alerts in 1957 likely represented the first full-scale severe storm warnings ever produced by the Kansas City broadcast community, said Mike Smith, who experienced the tornado as a 5-year-old living near Ruskin Heights.

He is now an executive with AccuWeather Enterprise Solutions, a Wichita, Kansas, firm that customizes weather data for corporate clients.

Today, the faces of TV meteorologists appear on billboards. When storms approach, they lead the news, commanding detailed graphics at the touch of a finger and airing staff reports from the field.

That happened in March, when five tornadoes touched down across the Kansas City area. One that struck Oak Grove, Missouri, in eastern Jackson County, caused extensive property damage and and injured 12.

The situation was much different six decades ago. There were no smartphone apps to spread severe weather alerts in 1957.

On the day of the Ruskin Heights tornado, Weather Bureau meteorologists Joe Audsley and Bob Babb were monitoring radar at their downtown airport station.

The radar itself was Navy surplus, taken from a World War II aircraft. To track storms, the meteorologists wrestled with the kind of folding road maps that were then distributed free at gas stations.

To communicate with Kansas City’s radio and television stations, they used a teletype system that printed out at about 15 words per minute.

Finally, they watched their language. Although local Weather Bureau meteorologists transmitted weather updates to their local radio and TV stations, they remained alert to the decree that discouraged them from using the word “tornado.”

The practice dated to 1895 when Willis Moore became chief of the U.S. Weather Bureau, established four years before. He was worried about spreading panic, said Smith of AccuWeather.

“Moore was afraid that a forecast of a tornado would kill more people than the tornado,” he said.

Such attitudes persisted through subsequent decades, and it made for a unique situation in Kansas City, which in 1957 was home to the nation’s severe storms center at 911 Walnut St.

Meteorologists in that center issued more general advisories, or “watches,” for every state in the country, alerting the public to the possibility of severe thunderstorms or tornadoes.

But the metropolitan area was under the jurisdiction of Audsley and Babb, and they remained hypersensitive to issuing a tornado “warning” that told people to take cover.

On May 20, the two men transmitted several careful warnings.

A 5:30 p.m. alert described a severe thunderstorm at Emporia, heading toward Kansas City, and indicated that KC residents soon could expect “high winds.”

A 6:30 p.m. bulletin mentioned not a tornado but a “funnel cloud touching the ground” — a tornado, in other words — 40 miles southwest of Kansas City.

About an hour later, after seeing a radar “echo” that suggested a tornado, Audsley prepared to transmit another alert when Babb took a call from officials at the Olathe naval station describing a tornado on the ground and heading northeast.

“Both Audsley and Babb believed they would be fired the next day,” said Smith, who told the story in his 2010 book “Warnings: The True Story of How Science Tamed the Weather.”

In fact, Smith said, the two likely saved many lives as the tornado approached the dense suburban area.

The tornado barreled into Ruskin Heights at about 7:48 p.m, and in a matter of minutes, it destroyed everything in its path before lifting for good just southeast of Raytown.

Today, counseling is available to schoolchildren traumatized by tornadoes.

There was no such hand-holding for kids like Carolyn Glenn Brewer, who was a 7-year-old Ruskin Heights resident in 1957. In the months that followed the storm, whenever she asked her parents about it, they changed the subject.

Forty years later, Brewer published a chronicle of the tornado, and a decade after that, she set up a small table with copies of her book at a memorial ceremony marking the 50th anniversary of the twister.

Pulling up chairs, many of her old Ruskin Heights contemporaries recounted how the tornado still haunted their dreams.

“Several of them said, ‘Maybe if I talk to you, it will leave me alone,’” said Brewer, who in 2011 published a second Ruskin Heights tornado book, “Caught Ever After,” detailing the storm from the perspective of children.

The district, comprised of about 1,800 small homes marketed primarily to World War II and Korean War veterans, had been modeled after the Levittown housing development on Long Island in New York. A three-bedroom, one-bath ranch house built on a concrete slab cost $11,200.

Basements cost $1,500 extra. Many Ruskin Heights families didn’t have one — like the Farris family.

When the tornado bore down on Ruskin Heights, Charles’ father ordered him, his two younger siblings and his mother into the family’s 1954 Pontiac. A neighbor from across the street joined them, along with her four daughters.

Charles’ father thought they could drive out of the storm’s path. Then he changed his mind. It was approaching too fast.

He ordered everyone out of the Pontiac.

“He told us to huddle next to the north side of the house,” said Farris, then 8 years old.

“There was no time to unlock doors.”

His father went to a corner of the house and looked quickly at the storm.

“He looked back at us,” Farris said. “Then I saw a 15-by-15-foot piece of sheet metal fly by. That probably would have killed him.”

The tornado lifted, and Charles watched the rotating funnel pass over his family’s home. 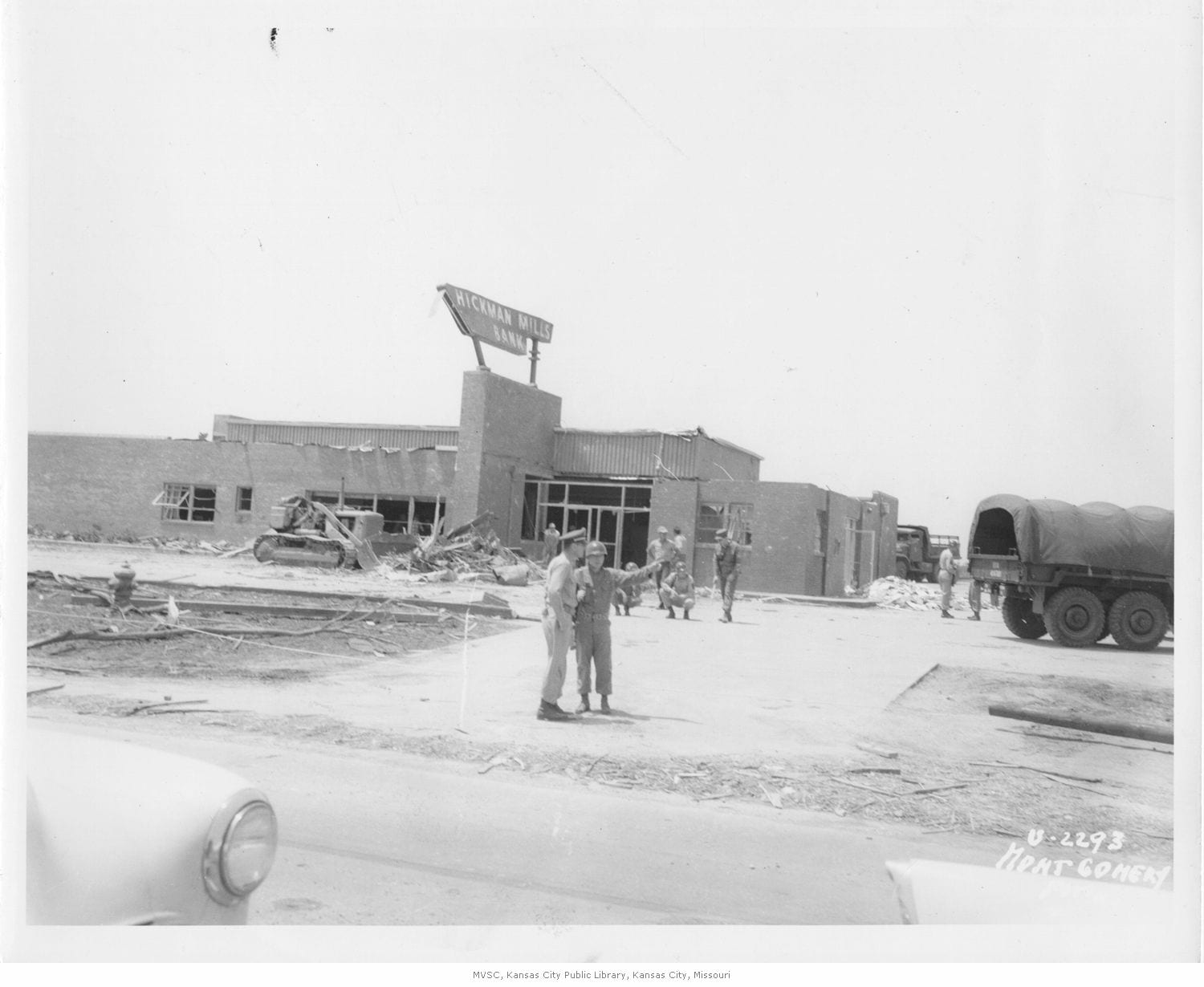 In her first book about the tornado, Brewer interviewed many of her parents’ contemporaries who — even almost four decades later — had struggled to contain their emotions.

“I spoke with the school principal and school nurse that we, as schoolchildren, had looked up to as mentors,” Brewer said.

“They had gone through the Depression and World War II. But, when talking about the tornado, they totally crumbled. They broke down and cried.

“To them the tornado was something over which they’d had no control. They had been unable to protect their children.”

On the 50th anniversary of the tornado, the Ruskin Heights Homes Association and the Hickman Mills School District joined other organizations to commemorate the tragedy.

The homes association planted 39 pear trees near Ruskin High School, and the school district awarded diplomas to several children killed in the storm who presumably would have graduated from the school.

The remembrances have continued since.

Every May, bouquets of flowers begin appearing at many of the trees, all of which have a corresponding plaque dedicated to a tornado victim.

This May the homes association will place a wreath at the memorial, and members have agreed to fund new landscaping around the pear trees.

The Ruskin Heights neighborhood has changed in 60 years. Today only about 30 percent of the 1,875 properties are owner-occupied, Sexton said.

Some homes are empty, and some are unkempt.

Many residents wondered, then, whether Cerner Corp.’s Innovations Campus, to be built near the site of the former Bannister Mall, north of Ruskin Heights, would bring economic momentum back to the neighborhood.

Use the slider above to view the water tower in Ruskin Heights as it was immediately after the tornado, left, and as a new water tower stands today, right, behind Burke Elementary School.

In February, the first employees began moving into the project’s first two towers near Interstate 435 and 87th Street. Ultimately, about 16,000 workers are expected to settle in during the 10 years it will take to build the $4.5 billion facility.

Sexton believes the impact is being felt already. A few Cerner employees have bought Ruskin Heights homes, she said. She also has taken calls from investors across the country pondering the purchase of housing stock as an investment.

Out-of-town investors wouldn’t be as desirable as more neighbors.

“It would help if the Cerner project would increase the number of owner-occupied houses,” Cheryl Farris said.

She inherited her childhood Ruskin Heights home, and today she and Charles — both members of the Ruskin High School Class of 1966 — remain there.

They also trust in the resiliency of the community’s young people.

As executive director and president, respectively, of the Hickman Mills Education Foundation, Charles and Cheryl Farris have helped supervise the distribution of $740,000 in scholarships to graduating Ruskin High School seniors as well as classroom-enhancement grants to district teachers.

It is inspiring to read the students’ scholarship applications, Cheryl Farris said.

But the tornado’s legacy also includes the fortitude of those who lived through it.

Brewer, who long has chronicled the Ruskin Heights neighborhood, has learned not to consider its 1957 tornado witnesses as victims.

“They are survivors,” she said. “More than one person told me that, and they said it emphatically.”

—Brian Burnes is a freelance writer in Westwood, Kansas