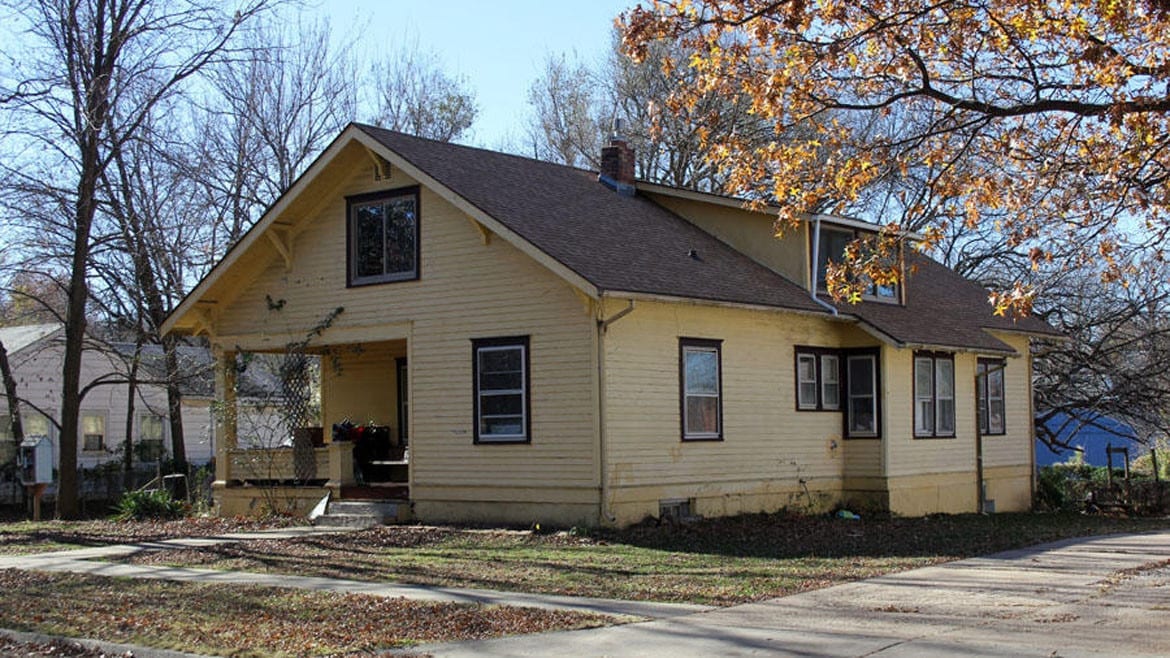 Jonathan and Allison Schumm and 16 children live in this 2,200-square-foot Topeka house. Jonathan Schumm, a member of the Topeka City Council, was arrested and charged with multiple counts of child abuse. One of the children was involved in a 2014 custody case pitting the Schumms against a lesbian couple from Wichita, raising questions about systemic discrimination against gay couples. (Photo: Andy Marso | Heartland Health Monitor)
Share this story

The arrest of a Topeka couple on child abuse charges has raised new questions about a custody battle that some say illustrates a pattern of discrimination against gay Kansans seeking to adopt children.

The 2014 custody case pitted a lesbian couple from Wichita, Lisa and Tesa Hines, against Jonathan and Allison Schumm of Topeka for custody of the Hineses’ foster child, Isabella, who had been in their care since she was 5 days old.

The Hineses were married in 2008 in California, but in 2014 Kansas did not recognize same-sex marriages, so Lisa Hines pursued the adoption as a single adult. But after a months-long battle, the court granted custody to the Schumms on the recommendation of the state’s Department for Children and Families.

Last week, the Schumms were arrested and charged with multiple counts of child abuse, according to the Topeka Capital-Journal.

Kari Schmidt, Lisa Hines’ attorney, said she was “heartbroken” when she learned the Schumms had been arrested.

Looking back, Schmidt said she was concerned about the Schumms’ ability to care for another child when the court approved their adoption of Isabella. At the time, the couple had 14 children — 10 adopted and four biological — in their 2,220-square-foot home, a number that disqualified them from acting as foster parents for the baby but not from adopting her. They now have 16 children.

Schmidt’s clients were both licensed social workers and were raising no other children.

“Contrast that to the home she was placed in,” Schmidt said in a phone interview Monday. “It defied logic to me. That’s why to this day I firmly believe it was a pretext to deny a lesbian couple a child they had bonded with.”

Tesa Hines believes that too.

Johnathan Schumm, a Topeka City Council member who is out of jail on bond, said the Hineses aren’t victims of discrimination. In a brief interview Monday outside his home, he said the couple’s sexual orientation was not a factor in the custody decision.

“That case was argued solely on whether or not we qualified as family based on her siblings,” Schumm said, before declining further comment.

Schmidt said she believes the Hines case is part of a concerted effort by officials in Gov. Sam Brownback’s administration to steer children away from gay couples, but it’s an effort that’s been complicated by the U.S. Supreme Court decision in Obergefell v. Hodges, which compels states to allow and recognize gay marriage.

Schmidt isn’t alone in her concerns.

In July 2013, Johnson County District Court Judge Kathleen Sloan removed a child from state custody after finding that DCF officials had gone to extreme lengths to build a case against a woman in a same-sex relationship seeking to adopt her foster child.

In the ruling, Sloan cited an email from a DCF official to Phyllis Gilmore, secretary of DCF, in which the official mentioned the foster mother’s sexual orientation as a concern. Sloan said in the ruling that DCF officials had abandoned the state’s legal directive to act in the best interests of the child and instead pursued a larger social agenda.

Questions persist about the administration’s attitudes toward gay Kansans. Brownback, an opponent of gay marriage, rescinded anti-discrimination protections for gay state workers and moved the authority for licensing foster homes from the Kansas Department of Health and Environment to DCF, a move that heightened concerns among same-sex couples seeking to foster or adopt children.

— Andy Marso is a reporter for KHI News Service in Topeka, a partner in the Heartland Health Monitor team. You can reach him on Twitter @andymarso

The University of Kansas Hospital has filed plans to expand its presence in Overland Park and build a 60-bed hospital there.

The Overland Park Planning Commission two weeks ago unanimously approved the request for a special use permit by The Winbury Group, the developer of the project. The request now goes to the City Council.

The hospital would be located on the southwest corner of 107th Street and Nall Avenue, near an inpatient surgical center operated by KU Hospital that was formerly known as Heartland Surgical Specialty Hospital.

The proposed 60-bed hospital, first reported by the Kansas City Business Journal, would be three stories in height and have 118,000 square feet of space.

Also last week, KU Hospital announced a joint venture with the Rehabilitation Hospital of Overland Park, which is owned by Enola, Pennsylvania-based Post Acute Medical. The hospital, at 5100 Indian Creek Parkway in Overland Park, has a 15-bed brain injury rehabilitation unit as well as other specialty services.

In 2014, KU Hospital opened its own inpatient rehab center just west of its main campus in Kansas City, Kansas. The center has 29 beds.

Oscar Wilde uttered his last words in Room 16 of the Hôtel d’Alsace in Saint-Germain-des-Prés, Paris on Nov. 30, 1900. He was only 46 years old. Ever since that moment, literary scholars, doctors and Wilde fans have argued about the precise cause of his death. The long-held theory was that Oscar Wilde succumbed to the ravages of tertiary, or end-stage, syphilis.

The British journalist and author, Arthur Ransome publicly posited syphilis as the cause of Oscar’s death in a biography he published in 1912. This was a somewhat suspect conclusion given that none of Wilde’s doctors recorded this malady as a cause of his death. Nevertheless, the syphilis theory kept gathering steam and reached its zenith of credibility 76 years later, in 1988, with the publication of Richard Ellmann’s magisterial and Pulitzer Prize-winning biography of Oscar Wilde. It was a diagnosis that left many uncomfortable, especially Oscar’s grandson, Merlin Holland.

Fortunately, a London neurologist named MacDonald Critchley and two ear surgeons from South Africa, Ashley H. Robins and Sean L. Sellars, have spent considerable time poring over Wilde’s medical and prison records to propose an entirely different, and far more credible, diagnosis. Critchley published his account in a 1990 “Medical and Health Annual” supplement to the “Encyclopedia Britannica” and Robins and Sellars published their findings in “The Lancet” (2000; 356: 1841-43).

In retrospect, Robbins and Sellars suggest that Oscar Wilde was suffering from a cholesteatoma, a rapidly expanding tumor in the middle ear that destroys normal tissue and yields a chronic infection of the ear, often with significant discharge or drainage of pus and fluid. Along with Critchley (who did not retrospectively diagnose a cholesteatoma in his report), all three doctors concurred that it was an out of control middle ear infection that killed Oscar Wilde.

— Dr. Howard Markel writes a monthly column for the PBS NewsHour, highlighting the anniversary of a momentous event that continues to shape modern medicine.

Last month the Robert Wood Johnson Foundation recognized Kansas City for its efforts to improve public health with its Culture of Health prize.

Now a newly released report by the Big Cities Health Coalition comparing health outcomes in the country’s 26 biggest cities offers a boatload of data suggesting Kansas City has made strides in many areas but lags in others.

To wit: Kansas City meets the goals set by the U.S. Department of Health and Human Services’ “Healthy People 2020” program for diabetes deaths but does not for cancer or heart disease deaths.

Kansas City’s 2012 heart mortality rates were the fourth worst of the 26 cities. Cleveland was worst, followed by Detroit and Sacramento. Los Angeles was best, followed by Phoenix, Minneapolis and Seattle.

“We knew that our cardiovascular deaths from heart attacks had been fairly stable for a period of time, but it was a surprise to see most places have gone down where we’ve been stable,” Dr. Rex Archer, director of the Kansas City Health Department, said about the data. 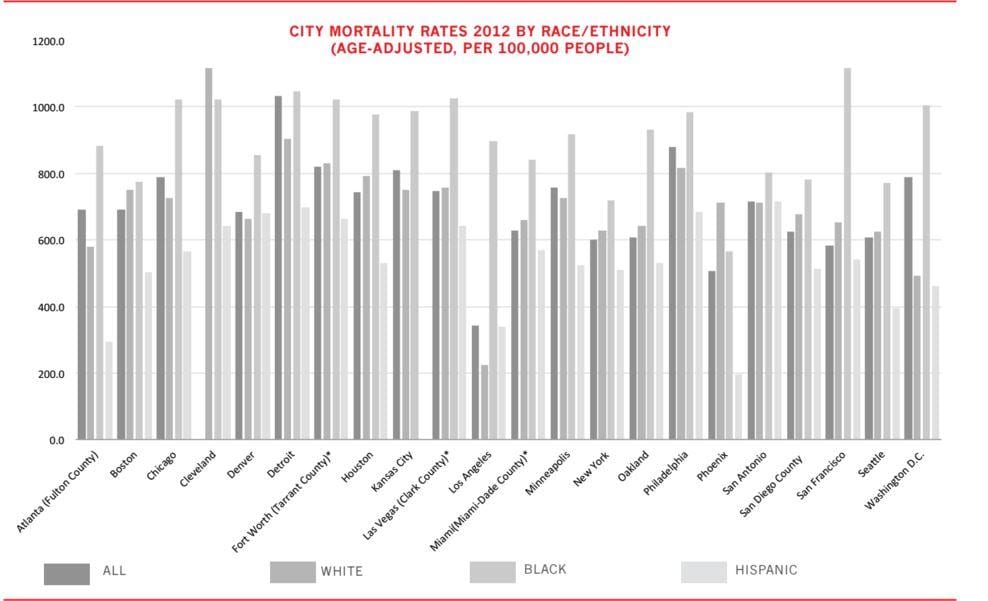 Kansas City, however, was no different from the majority of the 26 cities when it came to meeting the 2020 cancer and heart disease mortality goals. Only 12 cities met them.

Kansas City was singled out for its efforts to stem violence, particularly its Aim4Peace Violence Prevention program. Between 2010 and 2014, the report notes, homicides in the city fell 70 percent.

How to grow an Ebola vaccine with a tobacco plant

West Africa is still dealing with the aftermath of the worst outbreak of Ebola in recorded history. Last week, Liberia reported a handful of new cases, just months after the World Health Organization said the country was free of the disease.

And this weekend, not one, but two panels said the WHO needs to substantially reform and change the way it deals with international health crises.

What looks like an ordinary greenhouse is actually an around-the-clock Ebola vaccine factory. At a facility in Kentucky, plants are being injected with a protein in order to spur them into producing one of the three antibodies used in the experimental drug ZMapp.

— Watch the PBS NewsHour video by special correspondent Mary Jo Brooks, reporting on how bio-pharming is helping to ramp up the speed of drug production to fight the disease.