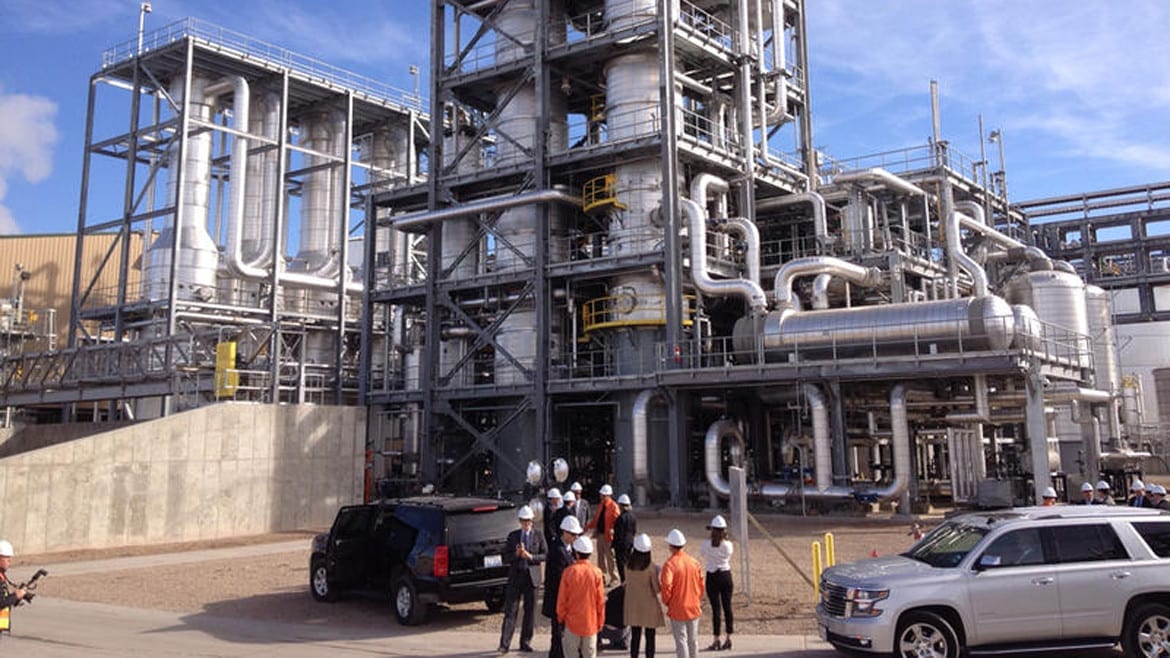 Financial problems at one of the world’s leading biofuels companies are causing ripples in the Kansas economy.

The Spanish company, Abengoa Bioenergy, opened a state-of-the-art ethanol plant in October 2014 near Hugoton. Gov. Sam Brownback greeted the grand opening as a shot in the arm for the Kansas economy.

“It does create jobs,” Brownback said at the time. “It creates opportunities, and right now we are seeing a rural renaissance in Kansas.”

But Abengoa’s role in that renaissance has not lived up to expectations. The company projected an annual payroll of more than $5 million at the southwest Kansas plant and estimated it would spend $17 million a year buying crop residue from area farmers for use as the raw material to produce ethanol fuels.

But a little more than a month ago, Abengoa officials said they were going to close the plant and reopen it in the spring, according to Neal Gillespie, Stevens County economic development director.

“They had produced ethanol, but no, it had never come up to full production,” he said. “I think they found some problems in the process and they were going to address those over the wintertime.”

Then, in late November, news broke that the parent company was considering bankruptcy protection. All but half a dozen of the 50 employees in Hugoton have been laid off.

The $500 million ethanol plant was financed, in part, with a $132.4 million loan guarantee from the U.S. Department of Energy. A spokesperson for the energy department said the company repaid its loan in full in March.

A Jackson County judge has awarded nearly $434 million to the Health Care Foundation of Greater Kansas City in its long-running lawsuit against HCA Midwest Health over whether HCA fulfilled the pledges it made when it bought several local hospitals in 2003 for more than $1 billion.

The award represents a sweeping victory for the foundation, which was created with proceeds from the sale of the hospitals and argued that HCA reneged on its commitments.

Circuit Judge John Torrence had previously found that HCA was liable to the foundation for failing to make capital and charitable contributions it undertook after its acquisition of the assets of nonprofit Health Midwest. Those assets included Menorah Medical Center, Overland Park Regional Medical Center and Research Medical Center.

Torrence had asked both parties to submit a proposed judgment payout but they differed on the amounts and submitted separate ones instead. Torrence adopted the foundation’s proposed order and rejected HCA’s argument that interest on the award should be calculated as simple rather than compound interest.

Torrence’s four-page order, which was handed down Wednesday afternoon, found that HCA is liable for $239.4 million over its failure to fund promised hospital improvements; $167.1 million in prejudgment interest; and more than $27 million in legal fees and expenses.

Christine Hamele, a spokeswoman for HCA, said the company was disappointed in the ruling and plans to appeal. Though both showed improvements, Kansas and Missouri continue to rank in the bottom half of states on measures of health care access, quality, costs and outcomes, according to a new report by the Commonwealth Fund.

The report, which was released last week, looks at 42 health indicators broadly grouped under five categories: access and affordability; prevention and treatment; potentially avoidable hospital use and cost; and premature deaths and health risk behaviors such as smoking.

The Kansas Legislature’s auditors say that the rollout of the computer system the state now uses to process Medicaid applications was long delayed in part because the contractor’s software required numerous modifications.

State officials say the system is improving and ultimately will make applying for Medicaid and social services a much more efficient process.

But documents obtained by KHI News Service show that state workers must learn dozens of “workarounds” to process applications. And some service providers who help clients get Medicaid coverage are reporting much longer processing times since the system went live in July and the state deals with a backlog of applications.

Kansas signed a contract with Accenture to build the Kansas Eligibility Enforcement System, or KEES, in 2011. The system originally was slated to be complete by the end of 2013, , but considerable delays caused lawmakers to seek an audit in March.

The audit report published Thursday said the KEES timeline was unrealistic from the beginning. The system had to be adjusted because of state and federal changes to Medicaid, some due to the Affordable Care Act. But there also were problems with Accenture’s “out-of-the-box” software.

“Although many modifications to the software were anticipated, far more extensive changes were required to meet the state’s needs,” wrote the Legislative Post Audit team, led by Matt Etzel. “These modifications required additional time to plan, design and implement and therefore increased the cost to build KEES.”

Auditors also determined that some of the functions Accenture promised had to be postponed, reduced or scrapped.

The Legislative Post Audit Committee voted Thursday to delay considering an audit into allegations of bias at the Kansas Department for Children and Families against adoptions by same-sex couples.

The panel of legislators instead voted to create a subcommittee that will develop a proposal for a broader investigation of the state’s foster care and adoption system that will be ready for an up-or-down vote in January.

“When we do it, we have to do it right,” said Rep. Peggy Mast, a Republican from Emporia. “It should be comprehensive.”

Mast added, “It looks like it’s a system that needs to be fixed.”

The same committee rejected a broader audit of DCF requested by two Democrats in July. One of those Democrats, Rep. Jim Ward of Wichita, was back Thursday before the committee to renew that request, while adding one focused on investigating whether DCF is attempting to steer children away from adoptive parents in same-sex relationships.

DCF officials have repeatedly said they have no formal policy to take sexual orientation into account when making recommendations for foster care or adoption.

Ward said he was OK with developing a broader audit, as long as the question of bias against same-sex couples is part of it.