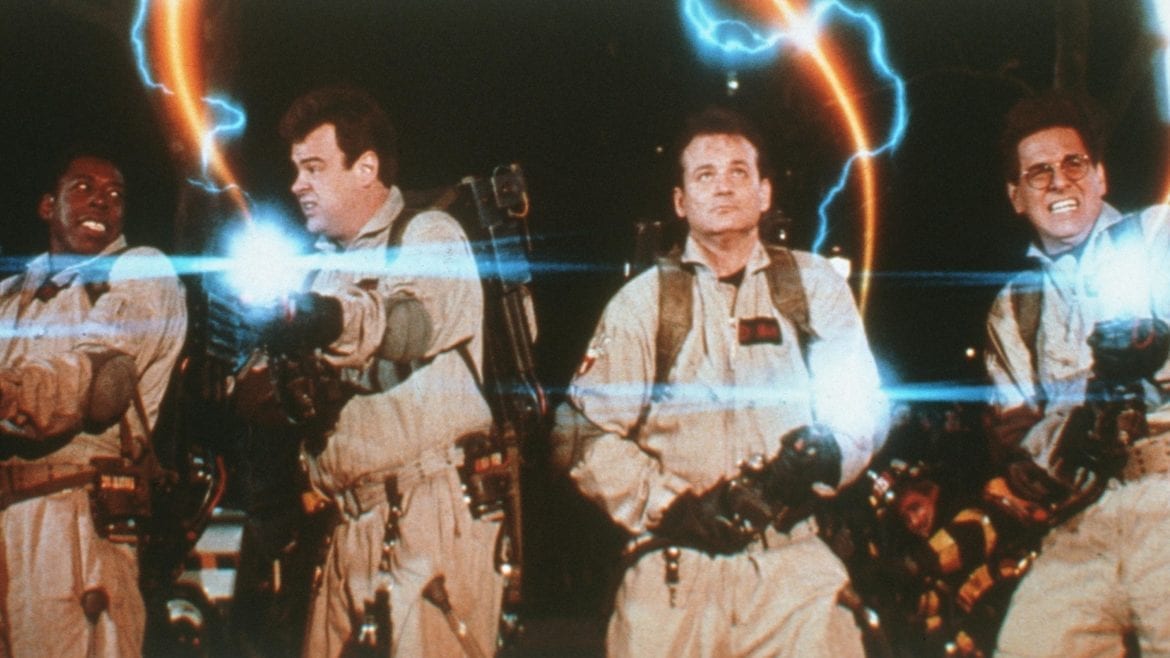 Even if you are a serious person with adult responsibilities, you are likely aware that a new incarnation of Ghostbusters arrives in theaters this week. It stars four funny women and was co-written by a fifth, and at least some proportion of its intended audience has found these staffing decisions alarming. While I haven’t seen it yet, Ghostbusters ’16 is by most accounts neither a feminist battle cry nor a cynically made disaster, but a light midsummer amusement. “Too risk-averse,” wrote the Village Voice’s Melissa Anderson. “It never strays far from the anodyne, generic humor that pervades the Ivan Reitman-directed 1984 original.”

Those words — anodyne, generic — are comedy anti-matter. But they perfectly capture how weird it is that Ghostbusters has become a subject of controversy. If you were at all cognizant of pop culture in 1984, as I was just starting to be, the idea that 32 years later Prince — the artist formerly known as the guy who almost single-handedly prompted Tipper Gore to found the Parents Music Resource Center — would find himself near-universally beloved, while Ghostbusters has become a divisive topic, is a tough thing to get your head around.

There was something going on that year, 1984. More than three decades before it arrived, George Orwell had pegged it as a year in which fresh ideas would be violently suppressed. No one knew it at the time, but 1984’s box-office charts foretold the originality-averse multiplex dystopia that awaited us on the other side of the millennium. In The Terminator, the year’s 21st(!)-highest grossing film we learned that the early 21st century would find the shivering, starving, war-thinned human herd hunted to extinction by machines. Emotionless. Data-driven. They do not feel pity, or remorse, or fear. In that respect they’re a lot like the beings who decide, in this nightmare year of Two Thousand Sixteen, which movies get greenlit.

Okay, that’s an overstatement. This isn’t: In box office terms, 1984 resembled 2014 a lot more closely than it did 1983 or 1985. Because, for the first time in history, every single one of its Top Ten grossing films spawned a sequel or a remake or both … except for the Daryl Hannah-Tom Hanks mermaid romance Splash.

(Wait, no, sorry, I’m getting something in my earpiece. It’s seems there was a made-for-TV Splash Too, featuring none of Splash‘s principal players, in 1988.)

(Movies are only real if they’re released in theaters, agreed?)

Of course he is.

*Numbers 11 and 12 were Purple Rain and Amadeus, respectively. Their principal creators, Prince and the playwright Peter Shaffer, both died just this year. Number 15 was Greystoke: The Legend of Tarzan, Lord of the Apes, another property we’re still monkeying around with.

While nine of these films would spawn theatrically-released sequels — hell, Police Academy and Romancing the Stone had quickie follow-ups out the following year — only two of them were sequels. (Temple of Doom was technically a prequel to 1981’s Raiders of the Lost Ark, but whatever.) Four of the top five were original concepts.

That wasn’t unusual at the time. 1983’s Top 10 contained four sequels/franchise installments: The Return of the Jedi at Number 1; the Roger-Moore-in-clown-makeup James Bond flick Octopussy at Number 6; Sudden Impact, the third sequel to Dirty Harry, at Number 7; and Staying Alive, a follow-up to Saturday Night Fever written and directed by Sylvester Stallone because sure, at Number 8.

The remainder of the lushly exploitable IP in 1983’s Top Ten has been left alone, mostly. 1983’s No. 2 movie, the Best Picture-winning Terms of Endearment, got an unlikely sequel. It was called The Evening Star, and it was one of the most bruising belly-flops of 1996, failing to crack that year’s Top 100. Like Terms of Endearment, The Evening Star was adapted from a Larry McMurty novel.

But there was no follow-up to 1983’s far likelier candidates for the Electric Boogalo treatment: not Flashdance, the year’s Number 3 hit, nor Trading Places (Number 4) nor WarGames (Number 5) nor Risky Business (Number 10). Compared to ’83, 1984’s biggest hits were simply easier to franchise.

(Wait, sorry, I’m receiving new information that a direct-to-DVD sequel entitled WarGames: The Dead Code, directed by and starring no one you’ve ever heard of, sought to capitalize on WarGames’ massive Reagan-era cache in… 2008. What did we say about DTV releases? They don’t count. Moving on.)

But enough of 1984’s past, let’s get back… to the future! 1985’s box office champ, Back to the Future, towered over its closest competition by a cool $60 million. In the Number 2 and 3 positions we get Rambo: First Blood Part II and Rocky IV, respectively. Clearly, Sly did not let the poor reviews of Staying Alive get him down — “It’s not even as good as Flashdance,” Roger Ebert wrote — because ’85 was indisputably his year.

Well, his and Phil Collins’.

But after those three, 1985’s Top Ten opened up to accommodate plenty of serious, and as yet, un-remade, fare: The Color Purple (adapted from Alice Walker’s novel, and now the basis for a Broadway musical that could well become a movie); Out of Africa (adapted from Karen Blixen’s memoir); and Witness, which actually won the Academy Award for Best Original Screenplay.

It also included The Goonies and Spies Like Us, both of which seem eminently remakeable, but for whatever reason have not been.

The 80s ran themselves out in similar fashion. In each year, sequels or adaptations of preexisting material were the exceptions in the Top Ten rather than the rule. Until, that is, 1989, when the top earners included the long-in-development Batman, Indiana Jones and the Last Crusade, Lethal Weapon 2, and Back to the Future Part II. Oh, and one other sequel, less inspired than any of those: Ghostbusters II.

But 1989 was an anomaly. Five years later, the ratio of new material to old in the Top Ten was far smaller than it had been a decade earlier, but still healthier than today. The biggest hit of 1994’s was a Best Picture-winning adaptation of Winston Groom’s novel Forrest Gump. Number 2 was The Lion King — Hamlet for kids, but we’ll still count it as an original. Number 3, the action comedy True Lies, was in fact a pumped-up remake of a French farce called La Totale!, but this was probably not one of the key factors that persuaded millions of patriotic Americans to buy a ticket for a James Cameron-directed Arnold Schwarzenegger movie.

Also in the Top 10: Clear and Present Danger (based on a Tom Clancy novel,), The Flintstones (based on a Hanna-Barbera cartoon), and The Mask (based on a comic book). Squeaking in at Number 10 was a wildly energetic and unpredictable crime picture, one that exuded originality from every pore –despite taking its title from a genre where formulaic plots and stock characters are celebrated. It was called Pulp Fiction.

On the other side of the millennium, innovation waned. The biggest hits of 2004 were Shrek 2 and Spider-Man 2, followed by Mel Gibson’s The Passion of the Christ, which was, you know, based on preexisting material, if not exactly in the same way that Meet the Fockers was.

There were still a few “originals,” however derivative, in the Top Ten: The Roland Emmerich bad-weather thriller The Day After Tomorrow. National Treasure. Brad Bird’s wonderful Pixar superhero movie The Incredibles. And when the franchise entries were as strong as Spider-Man 2 (Number 2), Harry Potter and the Prisoner of Azkaban (Number 4), and The Bourne Supremacy (Number 8), who was going to complain?

By 2014, there was nothing not extrapolated from a preexisting movie or comic book or Navy SEAL’s memoir in the Top Ten. (American Sniper became the first R-rated movie to win its year since Saving Private Ryan 16 years earlier.) Unless of course you want to count Maleficent, a reframing of Sleeping Beauty, or The Lego Movie, which was of course adapted from a set of molded plastic blocks that hurt when you step on them barefoot.

We got our first glimpse of this state of affairs 32 years ago now, in that year Orwell warned us about. We weren’t afraid of no ghosts, but maybe we should have been. These days, they’re pretty much all all we get.

And yet: when our franchise entries are as strong as Mad Max: Fury Road and Creed and Star Wars: The Force Awakens and Captain America: Civil War, who’s going to complain? Not me.

But… maybe go see The Lobster, too, would you?