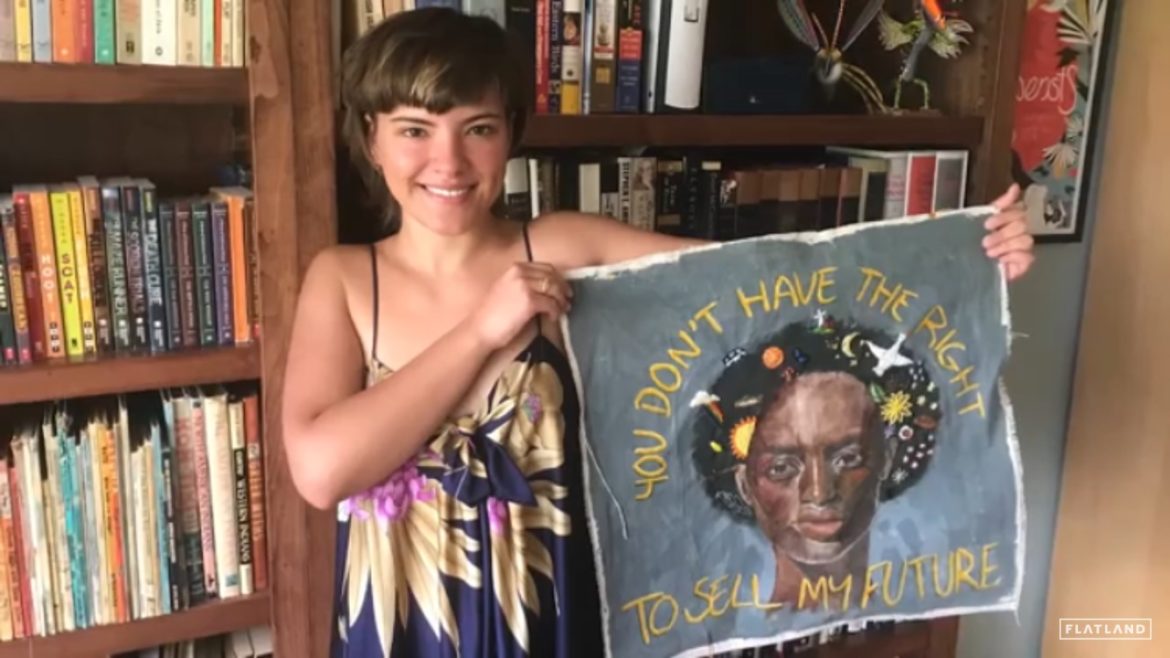 Even as the COVID-19 outbreak consumes the world’s attention, a coalition of activists are struggling to focus attention on the next looming crisis: the climate crisis.

“I believe very strongly that these are issues that we need to address,” says Molly McGlynn, one of KC Sunrise Movement’s art leads. “Just because we are going into quarantine doesn’t mean these issues are no longer pressing. In a lot of ways they are even more so.”

The youth-led climate activist movement has had a big year, ranging from massive global strikes to being namechecked on the Democratic primary debate stage. Kansas City’s hub had planned to use increased membership and the momentum gained from the September 20, 2019 climate strike to stage an even larger protest today, the 50th anniversary of Earth Day.

But now, with the gatherings of 10 or more people banned, hub leaders are dealing with a vexing question. How do you organize without being able to physically…organize?

“Most of the tools in our toolbox are gone right now,” says Sunrise policy advisor Michael Wolfe. “But the exciting thing is that it’s never been easier to get people plugged into our movement.”

Much of the organization’s activity has moved into video conferencing spaces like Zoom and team-building platforms like Slack. Those platforms have made linking resources translate directly into more engagement, with at least 30 new members joining during the hub’s first virtual open meeting.

The planned Earth Day strike has even moved to an online forum. Instead of an in-person demonstration, Sunrise Movement will host a 72-hour livestream protest from April 22-24. During this stream, the Kansas City Sunrise Hub will unveil their new initiative: The People’s Quilt.

“When quarantine happened…I was immediately trying to think of other ways to organize,” says McGlynn. “And I thought of doing something along the lines of the AIDS Memorial Quilt.”

The NAMES Project Memorial Quilt was a patchwork of contributed pieces of artwork to memorialize and celebrate the lives of those lost to AIDS. When it was first displayed at the National Mall in 1986, it brought awareness to the size of the AIDS pandemic.

Sunrise hopes to continue the legacy of quilt protesting by asking people to contribute panels to their own quilt.

“What you’re trying to communicate with your panel is how this current moment and political moment affects you, how it doesn’t work for you, and how you want it to be different under a Green New Deal,” says McGlynn. “It will take up space when we can’t gather in large groups.”

In addition to a change in venue, the organization also recognized a change in messaging was needed.

“There are more immediate needs for people right now,” says Wolfe. “The coronavirus, like the climate crisis, is exacerbating every other issue.”

At the core of Sunrise Movement’s message is the advocacy for the Green New Deal, a progressive legislative agenda that aims to restructure the U.S. energy system and economy by providing well-paying jobs that put the needs of frontline and marginalized communities first. But another pivotal part of the resolution introduced in Congress also prioritizes equitable access to health care and affordable housing, both of which are topics of increasing importance during the age of coronavirus.

“Maybe immediate action on the climate crisis isn’t the thing we need to do first. First, we need to worry about stabilizing our friends,” says Wolfe. “So we’re happy to support groups like KC Tenants, who are calling on (Missouri Gov. Mike) Parson for a rent suspension… They can’t fight for a liveable future if they’re worried about getting evicted.”

Data suggests that the impact of coronavirus and the predicted outcomes of an unmitigated climate crisis could look quite similar, especially when it comes to the people affected most drastically.

According to Hub Coach Becca Preisendorf: “This global pandemic is a microcosm of the devastation that can be caused by a global catastrophe upon these communities that have had the least to do with the problem. We’re also trying to be conscious of not trivializing what everyone is going through right now.”

Other side effects the human impact climate change shares with the coronavirus is its inevitable economic upheaval. One study from the University of Maryland shows that an unmitigated climate crisis will devastate nearly all sectors of the economy — especially agriculture, transportation and energy — not to mention the financial toll associated with evacuations and damages from increased natural disasters.

It’s the opportunity to draw these parallels that has given some Sunrise members a sense of optimism in pressing on with their movement.

“A lot of people are examining not having their job tied to health care, or the fact that they commit 40% of their income to rent, and meanwhile the climate crisis is still looming in the midst of a global pandemic,” Wolfe says. “The case for a Green New Deal and an economic green stimulus has never been stronger.”

Local businesses received a total of $53 million from the fund. But few of those dollars flowed east of Troost.