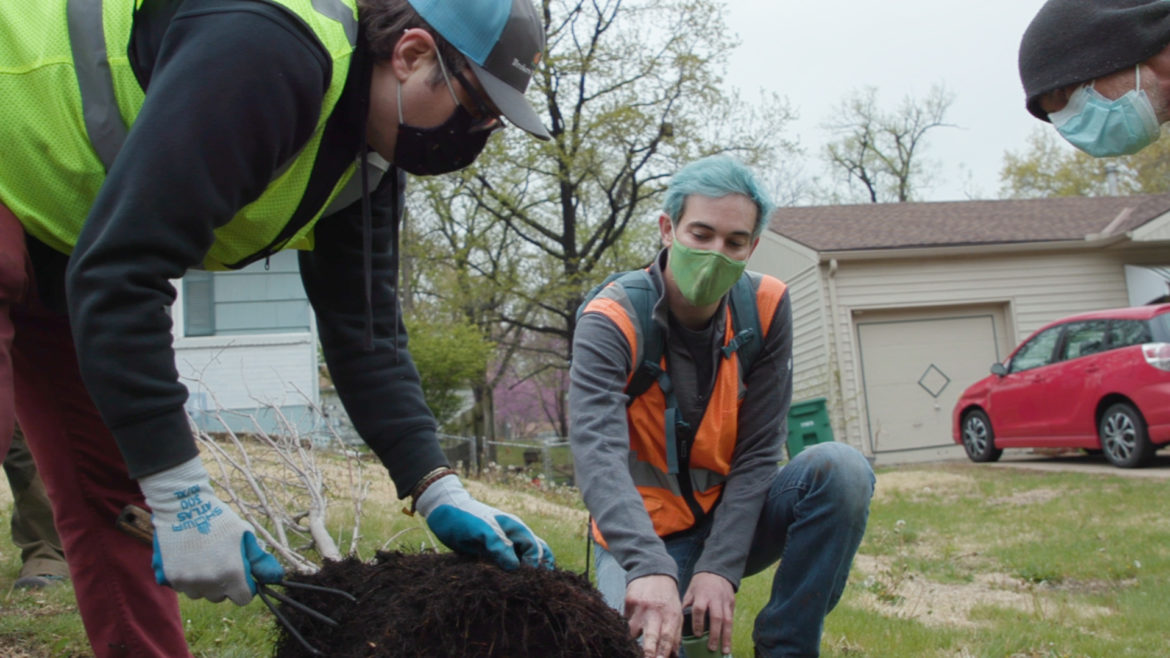 On a Saturday afternoon in the Fairlane neighborhood of Kansas City, Kate Fowler positions the base of a young American elm tree in her lap in front of a crowd of volunteers.

Shovels in hand, the volunteers listen attentively to instructions on how to ready the roots of trees they’ll soon be planting all along the block.

Fowler and her group of volunteers are with the Heartland Tree Alliance (HTA), a program with the environmental nonprofit Bridging the Gap. Over time, HTA hopes to expand the metropolitan area’s total tree count, otherwise known as the urban tree canopy. On this particular day, however, they’re just trying to recover some lost ground.

“This neighborhood had over 40 ash trees removed just this month.” says Fowler.

According to Fowler, the devastation of ash trees in this neighborhood was due to the emerald ash borer, an invasive beetle that has been nesting in and destroying a devastating number of these kinds of trees across the country for the better part of a decade.

Once you understand the breadth of benefits trees bring in respect to fighting climate change in Kansas City, the more tragic this loss feels.

From providing shade for buildings that cuts down on utility bills, to absorbing a mammoth amount of stormwater runoff (more than 1 trillion gallons a year), trees pay for themselves. But in terms of mitigating an oncoming climate disaster, it’s their cooling effect and ability to store carbon that are most important.

Locking In and Cooling Off

According to Kansas City, Missouri’s, Urban Forest Master Plan – Fall 2018, the city then had about 31% canopy cover. Even though the assessment pointed out that this is less than half of the city’s canopy potential, the tree count is able to pull 8,250,562 tons of carbon from the atmosphere annually.

This is a process called sequestration, something all plants contribute to on some scale. This carbon is converted into bark, twigs and even locked back into the earth when the tree dies and decomposes.

In addition to taking a crucial bite out of the country’s greenhouse gas emissions, trees cool the space around them, sometimes accounting for a difference of 20-45 degrees Fahrenheit between shaded and unshaded areas, according to the Environmental Protection Agency. Experts say this can play a crucial role in addressing the “urban heat island effect,” which helped land Kansas City at No. 5 on the Weather Channel’s list of 25 cities likely to be most affected by climate change.

Compared to nearby rural or less developed suburban areas, cities can be 15-20 degrees warmer. Due to vast stretches of asphalt, roofs and other reflective surfaces, Climate Central estimates that Kansas City stands to face an additional 20 summer days above 90 degrees in the near future.

According to a 2015 Centers for Disease Control and Prevention report, more people die from extreme heat events than all other natural disasters combined. This number is especially high among people over the age of 65 and under 5, which accounts for about 20% of Kansas City’s population.

“What is currently native to this area grows well now,” says Crowder. “But I do think we’ll start to see more southern species of trees that will start to do better here.”

Though the challenges seem daunting at times and there’s much room to grow, Crowder and the team know what they’ve signed up for.

“That’s the thing about trees, right?” she says. “You’re in it for the long game. The trees we plant today are not for me, they’re for my children and my grandchildren.”

Cody Boston is a video producer for Kansas City PBS.

Climate Impact Index Turns Up Heat on Kansas City Kansas City ranks as one of the worst cities in the country in a new transportation climate impact index.

Kansas City’s Regional Climate Change Effort Soldiers on Despite Pandemic In the Kansas City area, two local officials have launched an effort that has turned into a bi-state coalition to combat climate change. Those efforts are continuing despite the COVID-19 pandemic.