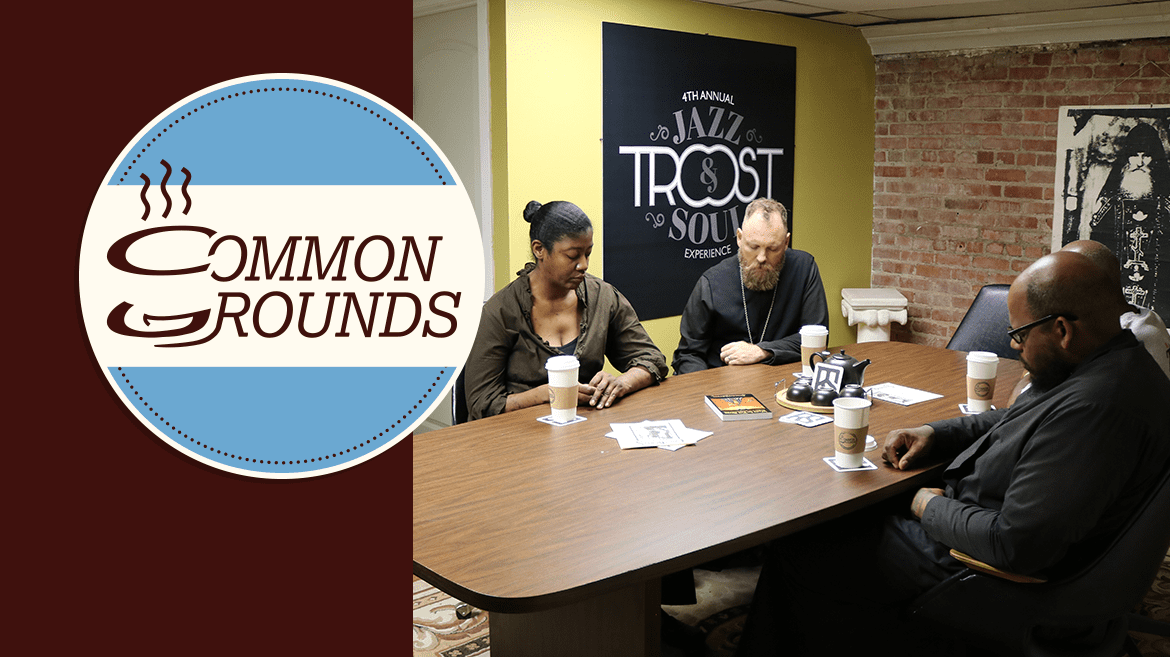 Reconciliation Services doubles as the home of St. Mary of Egypt Orthodox Church. The Rev. Justin Matthews led the the group in prayer prior to filming. (Photo: Mason Potter | KCPT)
Share this story

Reconciliation Services hosted the “Common Grounds” team this week, where the conversation included discussions about race and the violence gripping the nation.

Reconciliation Services provides emergency services and case management for the residents of its neighborhood. It also provides internet access and digital literacy courses for area residents.

Adams offered her perspective on living in the city as a single black woman.

“People have a tendency to look down on me and treat me with disrespect,” she said. “They might not directly say, ‘You are nothing to me’ or ‘You are beneath me.’ But their actions speak louder than their words.”

Qualls, meanwhile, was thinking about the recent incidents of police violence.

“I don’t think it’s as simple as, ‘He was black, and the cops were white.’ That’s not going to serve to bring [a] solution. It’s just going to keep the problem going,” Qualls said. “In Minnesota, he had a license to carry his firearm. That’s something that [gives] every single NRA member and conservative white man who has been upset about Obama taking their guns an opportunity to show solidarity.”

“Common Grounds” is a regular video series produced by KCPT in association with Consensus, a nonprofit focused on community engagement. Its purpose is to capture the pulse of our community over coffee. The segments run as part of “Week in Review,” which airs on Fridays at 7:30 p.m. and again on Sundays at 11 a.m. Flatland is also publishing the segments.

If you’d like the Common Grounds team to head to your coffee shop or listen in to your group, contact us at commongrounds@kcpt.org.

— Brett Baker is the Scripps Howard Foundation Fellow at the Hale Center for Journalism. He is also the coordinator for “Common Grounds.” To reach Baker, email intern_hale1@kcpt.org.

Commentary | Harry Potter and the Democrats

As Presidential Candidates shout about religious freedom, it’s time for some perspective

Talking about race at a KC barbershop