The Struggle for Security 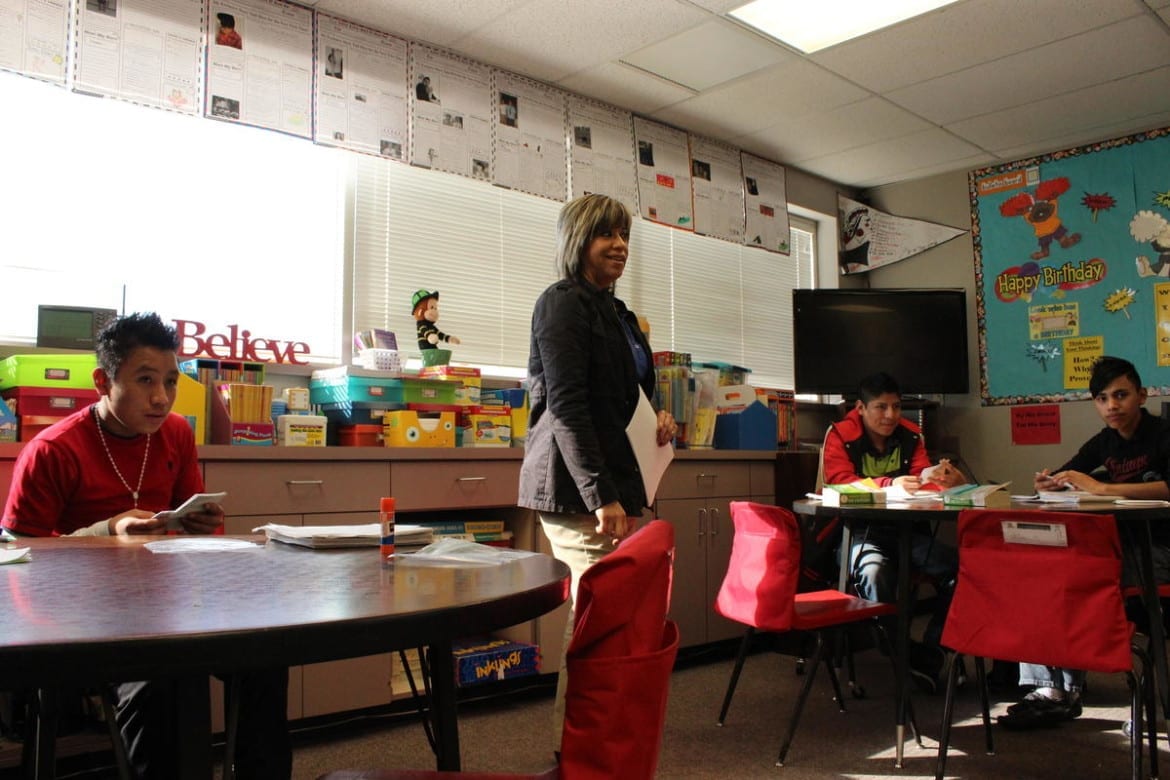 In the small, rural city of Liberal, Kansas, a neighborhood of old trailer homes sits just off the main street. The small trailer at the end of the block, with faded yellow paint and creaky front steps, is the place 17-year-old Diego now calls home.

Late at night, Diego sits on his bed, thumbing through his school work. A blanket embossed with an image of Our Lady of The Guadalupe hangs from his bedroom window. Diego is not his real name, but because of his immigration status, he’s asked that we not reveal his identity. He says it’s been a little over a year since he left his home in Joyabaj, Guatemala.

“I came here because I want to help my mom,” Diego says. “Since I’m her oldest son, well, I took the opportunity to come here and study and later look for a job.”

Diego is one of the more than 20,000 unaccompanied minors from Central America who last year made the month-long journey through Mexico to the United States border. And while many of these young immigrants live in large cities like Houston or Los Angeles, many others were re-settled in rural cities and towns throughout the Midwest.

In the last decade, many immigrants from around the world have found their way to towns like Liberal for work at the local National Beef meat-packing plant. Unaccompanied minors are often placed with family members already in the U.S. That means small rural cities with large immigrant populations – like meatpacking towns – have seen stories like Diego’s.

Some young immigrants are fleeing the escalating violence in El Salvador and Honduras, while others, like Diego, say they’re escaping poverty.

A smuggler was hired to bring Diego from Guatemala up through Mexico, but when he tried to cross the border into the United States he was apprehended by Border Patrol. Like the other unaccompanied minors caught illegally entering the country, Diego was briefly detained and then placed in federal custody.

He spent about a month living at a shelter in Texas where the U.S. Department of Health and Human Services confirmed his identity and assessed his health. Finally, he was released. The Office of Refugee Resettlement brought Diego to a family member in Kansas, someone who would agree to take care of him until his mandatory court hearing with immigration. That’s how Diego wound up in Liberal — his half-brother has lived there for years.

“When I saw him I was so happy I even cried,” Diego says. “I had never seen my brother until I saw him here.”

These young immigrants are designated “unaccompanied alien children” by the federal government and can remain in the country until their immigration status hearing. Some may choose to claim asylum, but many more will apply for Special Immigration Juvenile Status, available if a minor has been neglected, abused, or abandoned by their parents. If granted, the status allows a young immigrant to remain in the United States.

Diego is still waiting for his court date; due to the large influx of these cases, many immigration courts in the U.S. are backed up. In the meantime, Diego is not allowed to work legally, but he can attend school. He is enrolled at the local high school, something he says his family couldn’t afford to do back in Guatemala.

Working Nights To Study All Day

In a sunny classroom at Liberal High School, Diego’s ELL teacher Lori Navarro reviews idioms for an upcoming test. Her students shyly recite well-known American idioms like, “I’m in a pickle” and “Give me a hand.”

The wall behind them is lined with photos of each student. Attached is their personal immigration stories and how they came to Liberal. These kids hail from countries like Honduras, Mexico, and Guatemala. Not all of them are unaccompanied minors, but Navarro says she has had quite a few of them in her class. Reading their stories, she says, will humble you.

“You think you have it bad and then you hear all the things they’ve been through and what they’re still going through here,” Navarro says.

Like many of these young immigrants, Diego is in debt. He says he owes about $3,000 to the smuggler who delivered him from Guatemala and he feels pressured to repay the amount as soon as possible.

As soon as they arrive in Liberal, Navarro says, many young immigrants face difficult financial circumstances.

“They have to work to provide financially because they’re not living with their parents,” she says. “Then they have to send money back and they have to pay for their attorneys.”

Unaccompanied minors like Diego are not provided with a lawyer when they appear in immigration court. That means they may pay as much as $6,000 for representation. Research by the advocacy group Kids In Need Of Defense (KIND) shows that the success rate for gaining legal status is five times higher when the minor has professional representation. In Liberal there are only five immigration lawyers and they offer limited pro bono work.

Navarro says about half of the unaccompanied minors in her class have had to find work paid under-the-table and many pick up the night shift at the local meat packing plant. Considering all they’ve sacrificed to come here, she says, she wishes there was more she could do.

“You get our kids who come to the U.S. to better their lives and make it easier,” Navarro says. “Yet they go to work all night and come to school all day and they probably don’t even get that much sleep and then they’re back at work.” Sara Carrillo has spent the last 26 years as a social worker for Liberal’s public school district. In that time she says she’s witness a dramatic shift in the demographics of her students.

Today, Liberal’s population of 4,000 is over 60 percent Latino. But it wasn’t until last year that Carrillo began receiving large groups of unaccompanied minors. In the last two years, Ford and Seward counties in Kansas have received a total of 156 unaccompanied minors — more than any other region in the state.  That’s because, like Diego, they were placed with relatives that had previously moved to the area to work at National Beef. Carrillo says she’s accustomed to working with immigrant families, but when young immigrants come here without their parents, the issues they face are unique.

“The host wants them to drop out of school get a job start paying rent,” Carrillo says. “We have kids who are couch surfing from one friend to another.”

She’s found that when these young immigrants are relocated by the Office of Refugee Resettlement, many wind up living with near strangers. Even if they’re technically family, some may have never actually met before. This, she says, leaves them vulnerable to neglect and even human trafficking.

“Most of them are with cousins, aunts and uncles, someone from the neighboring village,” Carrillo says. “Anyone who will agree to go to the immigration center and sign a paper saying that they’re responsible for them.”

The Tip of the Iceberg

A recent U.S. Senate investigation discovered that this is a national issue. Overwhelmed by a large and unexpected influx of unaccompanied minors, the federal Office of Refugee Resettlement failed to conduct basic background checks on the adults entrusted with caring for these youth, according to an investigation by the Associated Press. That has resulted in cases of abuse and human trafficking.

By comparison, Diego, the young immigrant from Guatemala, is lucky. So far, his half-brother has continued to support him. However, he feels pressured to repay his debt and thinks that might mean sacrificing his last year of high school.

Diego says he hopes to be granted legal status. He likes it in Liberal and wants to stay. He’d also like to work legally, but more than anything, he says, he wants to return to Guatemala again to see his mom.

“A lot of people come here and they spend 30 years without seeing their moms,” Diego says. “Then when they go home, their moms aren’t alive anymore.”

That, he says, would be the worst thing imaginable.