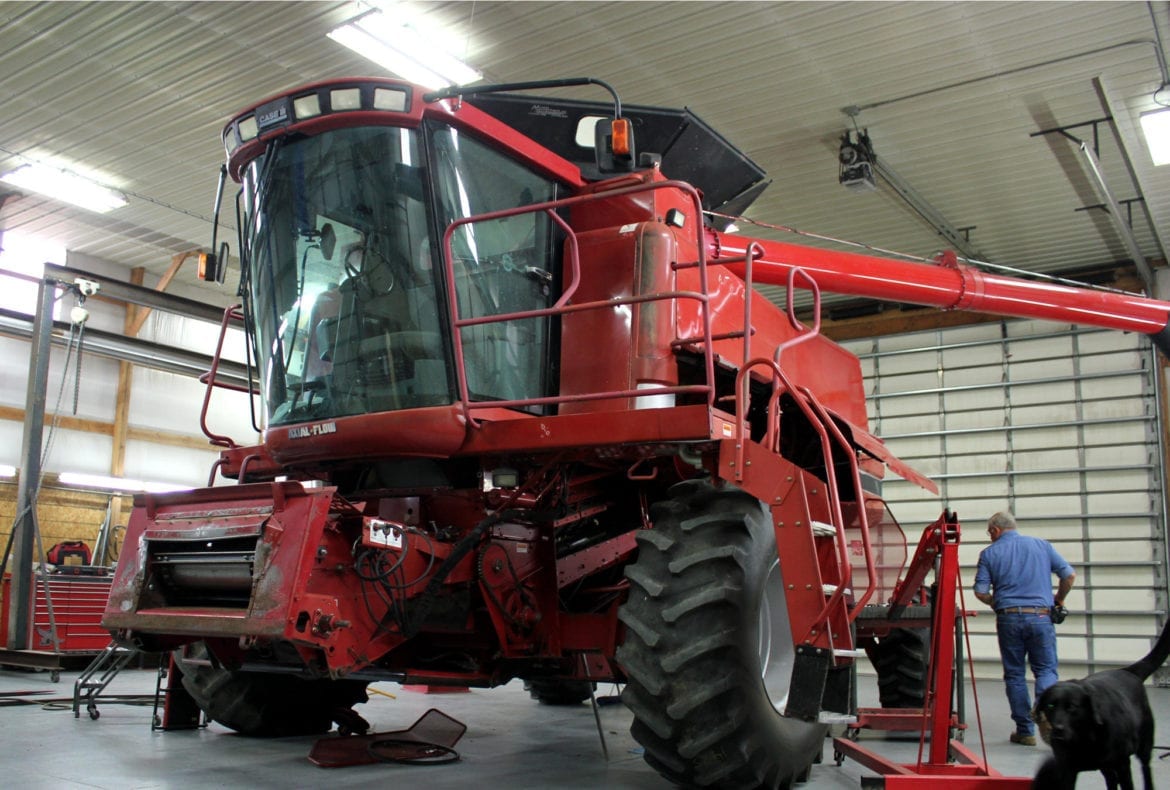 Farmers are used to fixing their own machinery, but without the right software from tractor manufacturers they are effectively locked out of many models. (Grant Gerlock | Harvest Public Media)
Share this story

A new tractor often costs hundreds of thousands of dollars, but not included in that price: the right to repair it. That has put farmers on the front lines of a battle pitting consumers against the makers of all kinds of consumer goods, from tractors to refrigerators to smart phones.

Modern tractors, essentially, have two keys to make the engine work. One key starts the engine. Today’s tractors are high-tech machines that can steer themselves by satellite, so there is another key – a software key – to get into the programs that make a tractor run properly.

For the most part, farmers don’t get that key, which has caused a stir for producers used to following a do-it-yourself ethic.

“I think most producers just want the ability to repair their stuff,” says Larry Bose, who farms near Orleans, Nebraska, and worked 28 years as a repair technician at a local John Deere dealership.

Farmers are lobbying to be able to buy the software they need to get back under the hood. A bill in the Nebraska legislature (LB 67) would require manufacturers to put repair software up for sale. The bill, however, does not stop at tractors. It would also apply to everything from phones to printers to home appliances.

The bill is currently stalled in committee, but seven other states including Wyoming, Kansas and Illinois, have also introduced similar bills, each of which would make their state the first in the nation to force consumer manufacturers to divulge repair plans.

Farmer Larry Bose can replace parts on his tractors, but he says only dealerships have the software he needs to make those parts work.

“As far as replacing, you can do it or you can have somebody else come do it for you,” Bose says. “If it needs calibrating you have to have the dealership come do it.” 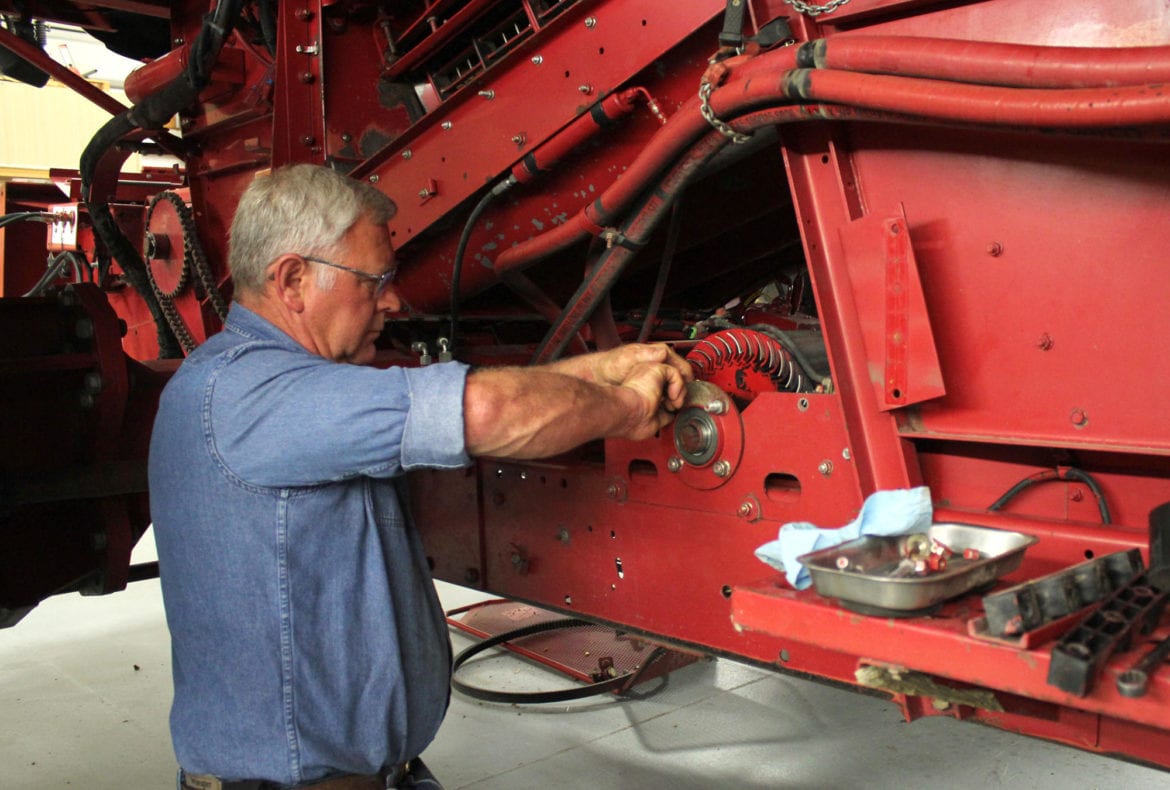 Similar restrictions make it hard to fix iPhones and other gadgets. Bose says even basic repairs like installing a new battery or an exhaust sensor can mean paying for a service call to recalibrate the tractor’s software, at an hourly rate over $100.

Most of the time, Bose says, it’s just a nuisance. But the scenario he and other farmers worry about most is being stuck during planting or harvest.

“You know, if the dealer is a few days out you have to wait your turn until they can get there,” Bose says.

When time is money he could be waiting for someone else to fix what he might have done himself. Dealers say wait times like that are the exception, but Bose says if he, or another mechanic, had the right software he might not need to wait at all.

Some farmers want this software so badly, they told the news outlet Vice they are using pirated software from Ukraine to basically hack their way into their own tractors.

“It’s not extreme,” says Gay Gordon-Byrne, executive director of The Repair Association, a group that advocates for consumers to be able repair the products they buy. “I mean, if you have something and you can’t fix it and you get on the Internet and find a way to fix it, I don’t blame anyone for trying it.”

But, she says, there should be an honest way to do it. The model for the legislation in Nebraska and other states is a 2012 law passed in Massachusetts that requires the auto industry to sell diagnostic and repair software.

“In response, we got a nationwide, privately-negotiated agreement between car manufacturers and repair shops that implemented that Massachusetts legislation across the country,” says Aaron Perzanowski, a law professor at Case Western Reserve University. “So things are much easier in the auto world now than they were and it’s different how we handle repair of cars compared to other goods.”

The U.S. Copyright Office recently weighed in on consumers’ right to repair. Perzanowski says the agency determined that, in most cases, breaking into a product’s software to repair it is not a violation of copyright law.

“The Copyright Office said it’s not against the law for you to unlock that software, but (manufacturers) don’t have to give you the key,” he says.

The way manufacturers hold onto the keys, says Gay Gordon-Byrne, is through user agreements. When users clicks “I agree,” she says, it often means, “I agree not to repair.”

Farmers fixing their own equipment would be an obvious blow to the business of tractor dealers who have cornered the market on repair. Andy Goodman of the Iowa-Nebraska Equipment Dealers Association, however, says the Nebraska legislation would allow farmers to do more.

“When we resell that machine we have guaranteed it’s going to perform within certain standards,” Goodman says. “Those (standards) stated by the manufacturer, but also those required under law.”

A dealer could be liable for regulatory violations, Goodman says, so access to tractor software should remain limited to technicians like those at dealerships.

Most farmers aren’t looking to cut ties to local dealers. The mechanics who work there have the most up-to-date training. But farmers like Larry Bose are also looking to cut costs anywhere they can. Commodity prices are low and that means there is less money to go around.

Now, when he’s paid for a tractor, Bose says he’d like to be able to be the one to fix it.