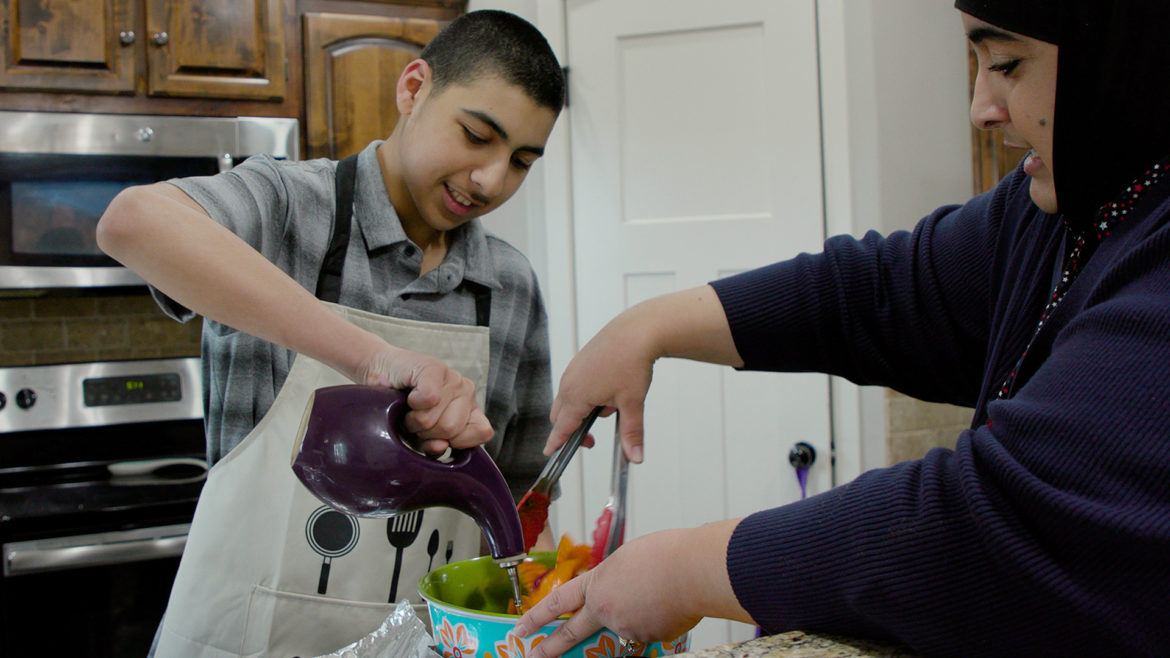 Yousef Tamsamani gleefully jumped after putting on his apron.

With a laser-focused gaze, he cut onions to mix with other cubes of vegetables in a pan with chicken. He then drizzled oil over the pan and sprinkled two tablespoons of his own homemade fajita spice.

The kitchen is his happy place, explained his mom, Ezdahar “Ezzie” Tamsamani.

“Food is a language of love,” said Ezzie, choking back tears as she recounted how her own mom cooked beautiful meals for her and her siblings.

The ever gentle mother, Ezzie guided him, step by step, from the side of the kitchen counter. That’s because when Yousef was two years old, his pediatrician diagnosed him with autism.

Ezzie couldn’t believe it at first, but she and her husband adjusted.

The former school teacher has since retired so she can be more hands-on with her only son. She has since showered her son with the same kind of love her mom did — with food.

That clicked with Yousef. When he was two years old, he picked up a wooden spoon and has since been at her side to help her prep, whisk and mix.

She recalled his diagnosis well. His doctor said he wouldn’t be able to do much, such as ride a bike, and never be able to work. But Ezzie and her husband pushed past that. Yousef has since learned to ride a bike and now he mixes and sells spices.

Cooking and mixing spices is a way to communicate and engage with her son, Ezzie said. And it’s how she hopes to help carve out his future.

At 14 years old, Yousef remains nonverbal. But a hobby-turned-passion project, Yousef Speaks Spices, which has more than 43,000 likes on Facebook, is his way of communicating through doing what he loves — being in the kitchen. You can place an order through the Facebook page.

April is Autism Acceptance Month. To see more of Yousef in action, watch the attached video.

Sweet Taste of Success for The Golden Scoop