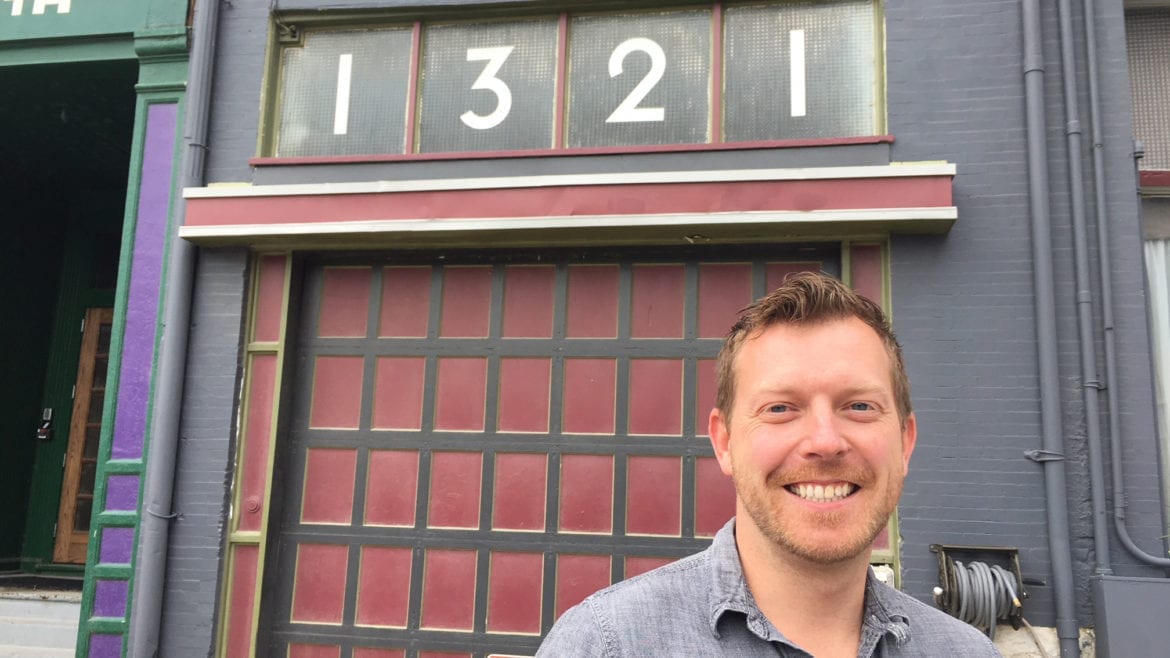 Alex Lindsey is in the process of building out the space at 1321 13th St. for West Bottoms Whiskeys. (Jonathan Bender | Flatland)
Share this story

A wolf howl splits the afternoon quiet as a truck slowly backs up to a loading bay in the West Bottoms. The garage door at 1321 13th St. rolls up and Alex Lindsey steps out to see what’s happening in the shadows of Kansas City’s haunted houses.

There’s chalk drawings on the concrete floor behind him, a rough outline for the space that will become West Bottoms Whiskeys, a new distillery dedicated to the amber spirit.

“I’m inspired by that post-Civil War, pre-Prohibition era,” Lindsey, the owner and distiller for West Bottoms Whiskeys, said. “It was an era of innovation. There were a lot of breakthroughs and we want to see that happen for whiskey.”

Like most new distilleries, Lindsey intends to initially source his whiskey and then create signature blends. He’ll also work on quarterly, seasonal releases, perhaps a smoked whiskey made with smoked oats, in a 10-gallon still.

Lindsey’s rye would likely have a grain bill of mostly rye with a bit of wheat and two row barley, while a wheat whiskey would flip the ratio of rye and wheat. He is also considering a Kansas City whiskey, blending in a small amount of sherry, and expanding the category launched by J. Rieger & Co.

“I don’t want it to be overly sweet,” Lindsey said. “Ours might be a little more rye heavy.”

Show Me | J. Rieger & Co. WhiskeyJ. Rieger & Co. was forced to close its doors due to prohibition, with only the family named Rieger Hotel surviving. Ninety-five years later, whiskey has returned to the East Bottoms bearing the name of KC as a distinct style of…

In 2011, Lindsey began homebrewing beer. After six months, he bought a still and began experimenting with his own spirits. He toyed around with brandy and a wheat whiskey. The response he got from friends and family, who have also provided the initial capital for his business, convinced him to explore the idea of opening a distillery. He’s spent the past two years trying to find the right space in the West Bottoms before signing the lease last month for the space next to the Mulberry Room on 13th Street.

“I’m excited by what’s happening in the West Bottoms. I think we’re a great fit and the time is right,” Lindsey said.

The shotgun space, it’s roughly 40 feet long by 13 feet wide, will have a bar and seating up front. Lindsey is filing permits this month and intends to build the bar himself. The production area with barrels, blending tanks and a still will be in back separated by a gate. West Bottoms Whiskeys will serve cocktails and sell bottles out of the taproom.

“It’s a small space so we can get going,” Lindsey said. “We want to be that place where people who know whiskey say, ‘This is someone who knows how to make whiskey.'”

Follow @FlatlandKC for all your food and drink news.

This story has been updated with the correct address for West Bottoms Whiskeys.