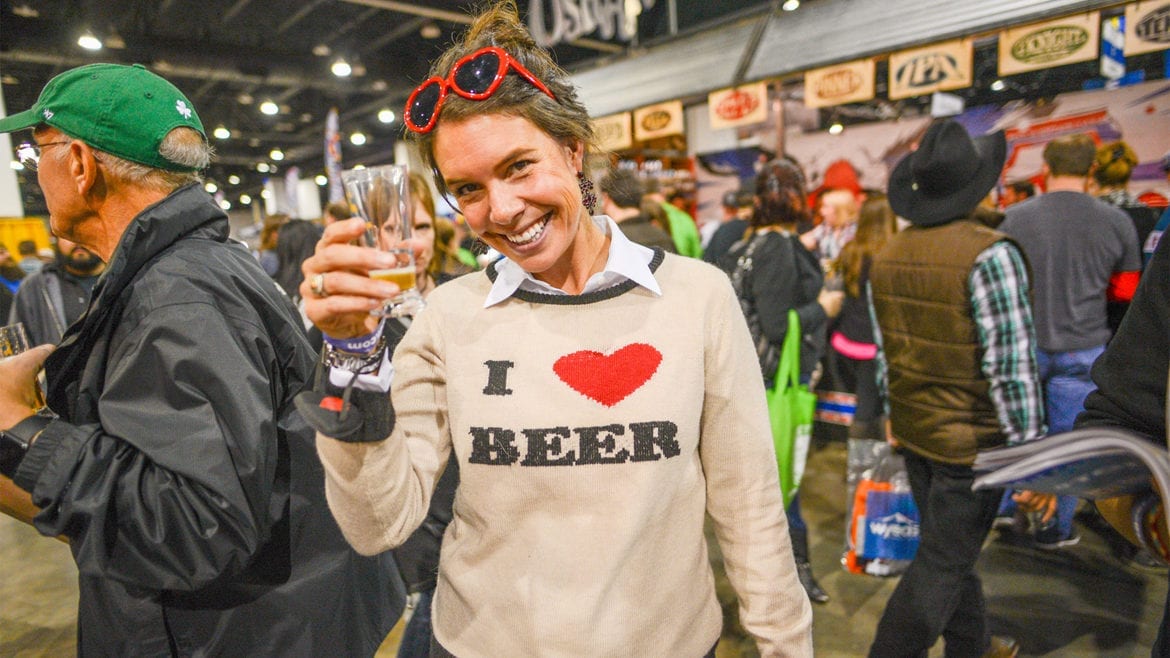 Beer Festival Season has arrived. Are you ready? (Pete Dulin I Flatland)
Share this story

Spend an afternoon in downtown Lee’s Summit with the Strother Beerfest, so named for the Strother District. The brewfest, put on by the Lee’s Summit Downtown Rotary Club, is from 1 to 5 p.m. on Saturday, May 11. General admission tickets are $35, VIP tickets (which include a separate bathroom and $5 coupon toward food vendors) are $50.

All breweries have to start somewhere. And that somewhere is often the KC Nanobrew Festival. The celebration of homebrewers is from 2 to 6 p.m. on Saturday, May 18, at Berkley Riverfront Park. The festival, now in its tenth year, features more than 300 kinds of homebrew. Tickets are $40.

The Tour De Bier, a benefit for BikeWalkKC, is back on Sunday, May 19. You can take a 15, 35 or 50-mile bike route that starts and ends at Knuckleheads Saloon. As part of the historical bike tour of local beer lore, you’ll get to stop by four to six breweries and then get lunch from a collection of food trucks (Jerusalem Cafe, Urban Cafe, among them). Registration is $50.

Big Rip Brewing Co. celebrates its sixth anniversary with the Get Ripped Beer Fest on Saturday, June 1, from noon to 4 p.m. The outdoor fest at the North Kansas City, Missouri, brewery features more than a dozen local breweries, as well as distilleries and Hawg Jaw BBQ. A $30 ticket includes a glass and beer samples.

Green Room Burgers & Beer has a trio of beers on tap: Cask Ale (a porter with vanilla bean), Old Country Promise (a farmhouse ale) and Supreme Exchange (a lager created in combination with Big Rip).

Brew Lab has Vitis Grape Wild Ale on tap. The wild sour ale has plenty of wine characteristics. It was aged in a foeder on chambourcin red grapes from Stone Pillar farm with local vineyard yeast.

This season might be one where beer is not just a nice part of going to the ballpark, but a necessity. Boulevard Tours and Rec is holding a Royals Rally on Thursday, May 9, from 6 to 8 p.m. It’s $10 and that gets you a koozie and a can of beer.

KC Bier Co. drops Der Bauer at 2 p.m. in its taproom. The summer seasonal is a farmhouse ale (7.75% alcohol by volume) made with German malt and hops. Get a pretzel and a pour for $7 from 4 to 10 p.m. Der Bauer will be available on draft and in six-packs locally.

Fun things happen when somebody gets a shot to go pro. The Big Rip Brewing Co. will be unveiling Lost in Santa Carla, a scale-up of a saison made by homebrewer Dyon Harper, at 4 p.m.

The KC Tap Tour is back for its third season. The guidebook program, run by Visit KC, includes 23 breweries in and around Kansas City. Get stamps in your guidebooks ($10) by buying a beer at a participating brewery and earn prizes (12 stamps gets a beer can glass) and discounts on brews.

Get a little funky with Fungi & Fermentation — a celebration of mushrooms, kombucha and beer — that will feature talks and chef demonstrations at Powell Gardens. The Brewkery will be teaching a class on kombucha from 3:30 to 4:30 p.m. and the last call for alcohol is at 5:30 p.m. The festival requires a general admission ticket to Powell Gardens and a separate ticket for the beer garden with Crane, Vox and Lawrence Beer Co.

East Forty Brewing Co. is holding its second annual KC Brew & Chew on Saturday, May 4, from 2 to 6 p.m. in Blue Springs, Missouri. Tickets ($20) come with 15 beer samples from local breweries. There will also be food trucks onsite, and a free kids zone and live music between 2 and 10 p.m.

Take a spin on the Bosco Brew Bus. A tour of four local breweries — Cinder Block, Strange Days, Brewerial Emperial and Stockyards — starts at the Don Bosco Centers Kansas City (580 Campbell St.) at 12:30 p.m. Tickets, which include snacks, a cocktail and beer tastings, are $50.

Crane Brewing Co. is hosting its second annual Cinco de Mayo party from noon to 6 p.m. The Raytown brewery is serving up carnitas and carne asada tacos, nachos and chips and queso. The brewery will also have a Mango Lassi with chili and lame and a cocktail made with Mean Mule’s american agave.

Limitless Brewing is also leaning in to tacos and beer, including a new Mexican lager, with both from 1 to 5 p.m.