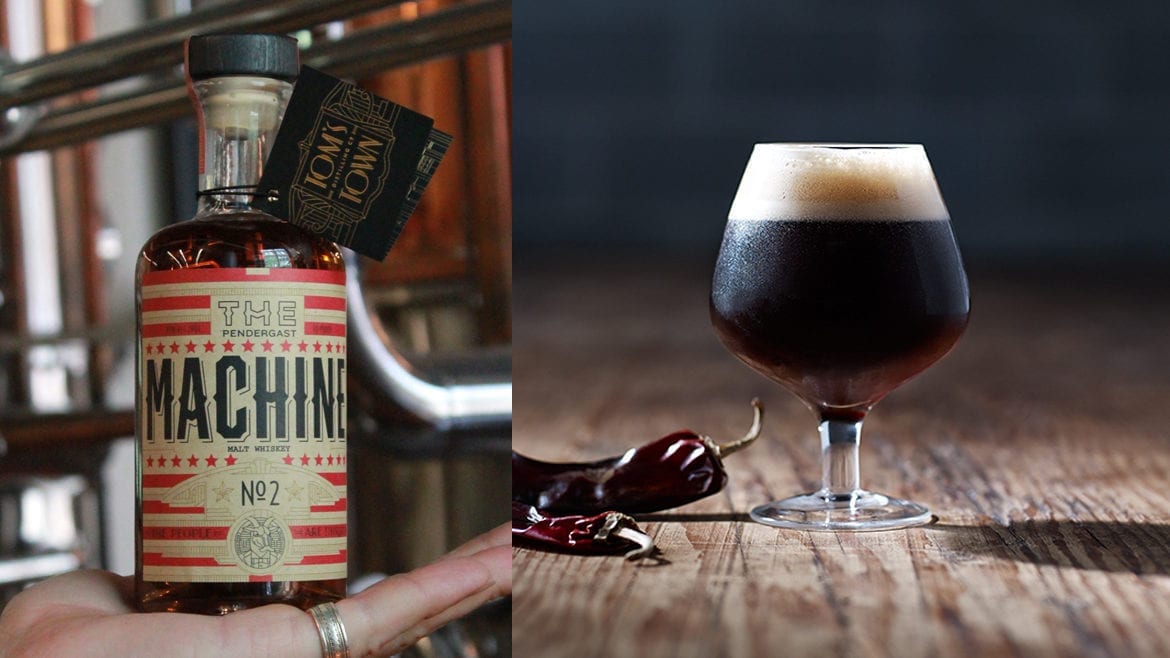 In the true spirit of craft, Tom’s Town Distilling Company head distiller Rob Vossmeyer has created a Belgian quadrupel-based whiskey with the help of Torn Label Brewing Company. Available in limited quantity, the unique whiskey is part of The Pendergast Machine series.

Machine No. 2: Brewer’s Series/Torn Label is a whiskey distilled from Torn Label’s seasonal Quadjillo Belgian Quad brewed with guajillo peppers. The whiskey was aged in new American chinquapin oak barrels made by McGinnis Wood Products in Cuba, Missouri. After barrel-aging 11 months at Tom’s Town, the batch was packaged in fewer than 500 375-ml. bottles

“I was familiar with Torn Label’s beer. They are a matter of blocks away from us,” said Vossmeyer. “I met with [co-owners] Travis [Moore] and Rafi [Chaudry] to discuss the concept of making a distillate with their beer and then aging it. In turn, they could brew another batch and barrel age it in our PRG barrels.”

Quadjillo’s bold character made it a strong candidate to undergo the transformation. Machine No. 2 was purposely created as a malt whiskey. Vossmeyer declined to share details of the proprietary production process.

“Travis worked very hard to create all the flavors in the beer and I wouldn’t want to waste any of it by stripping that out of the spirit,” said Vossmeyer. “It became clear to me that the Quadjillo was not only a unique beer with a higher ABV, but it was also a standout product for them.”

The whiskey is described as having “a bright citrus, jasmine and vanilla bean nose, and the palate is pepper, cinnamon, honey, caramelized sugar and hops.”

“I think the high esters of the quad translate superbly,” noted Vossmeyer. “After that it has a wonderful malty backbone, spices and the pepper and hops come through on the finish. I believe the citrus comes from the hops in the beer. The vanilla bean and caramelized sugar come from the barrel. The clover honey and cinnamon [are] from elements in the beer as well.”

The distillery and brewery plan to co-release the spirit and beer for concurrent release. Check calendar listings below for details on the release party. With summer in full swing, here’s a look at some of June’s current and upcoming beer releases designed to quench thirst. Releases subject to change. Check with your local brewery.

Loretta (now through August, taproom and limited market release) is a lager with a soft round palate, light fruity sweetness, and mild bitterness. Try the Hilltop Hops Peach Wheat (4.5-percent ABV, taproom only, special release), an American wheat made with peaches. The subtle stone fruit’s flavor emerges on the finish. Also on tap, B-Weisser (3.5-percent ABV, taproom, seasonal) is a take on Berliner Weiss that is tart and refreshing for summer.

Doppel Alt (taproom) has a copper color, toasted and caramel malt flavors, assertive bitter finish, and citrus aroma. Gose (5.1-percent ABV, taproom only) is a traditional German style with added salt and coriander. Made with 60-percent wheat malt so the gose is hazy in appearance. Pils (5-percent ABV, taproom with June distribution throughout Kansas City, limited release), made with only German Pilsner malt and Hallertau Mittelfruh hops. Pale in color with a crisp finish, this pils pours with a full, thick head that laces glassware beautifully. Kolsch (late June, 4.7-percent ABV, draft only, taproom with distribution throughout Kansas City, limited release) is made with 90-percent pilsner malt and a touch of wheat for a slight haze effect. Balanced hops and malt, brewed with the same yeast strain used in Cologne, Germany. McCoy’s Public House (4057 Pennsylvania Avenue) will tap its 2017 Ursa Minor Imperial Brown Ale at 4 p.m. This nine-percent ABV beer is a sought-after limited release available in the taproom only. A 2016 Ursa Minor keg will also be tapped.

Visit Grain to Glass (1611 Swift Avenue, North Kansas City, Missouri) for a Boulevard Brewing Saison-Brett Bottle Share, 5 to 7 p.m. Participate in a vertical tasting of different years of this world-class beer. Grain to Glass has 2015 and 2017. Bring other vintages to share. $15 (or $10 if bringing a bottle to share).

Beer KC and Sporting Kansas City present the Seventh Annual Westport Beer Festival (4057 Pennsylvania Avenue), featuring more than 80 beers from 35-plus breweries and distilleries. This event, 5 to 9 p.m. is a benefit for AIDS Walk Kansas City. Tickets ($35 advance, $40 at gate) includes a tasting glass and unlimited pours from participating breweries, while supplies last.

Crane Brewing will be pouring beer in the beer garden at VegFest Kansas City in the The City Market (20 E 5th Street).