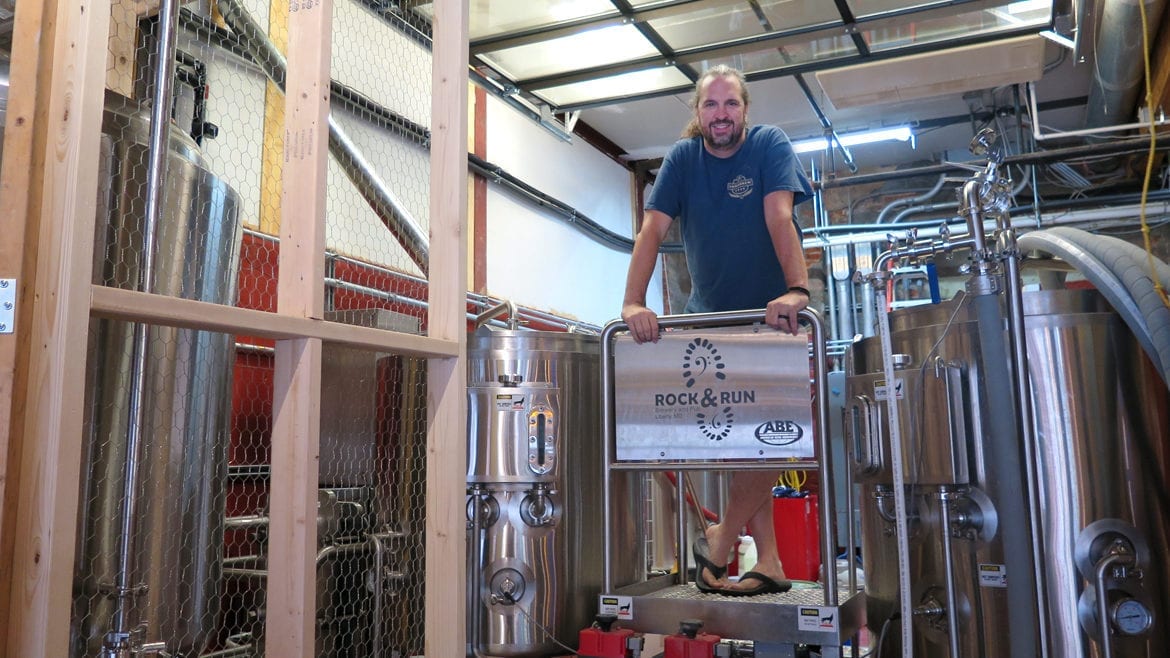 After more than a year of upheaval, Gene DeClue and Dan Hatcher, the two operational owners of Rock & Run Brewery and Pub (110 E. Kansas St., Liberty, Missouri), believe they’re turning a corner. They released their first canned beer, installed a new brewhouse system in their original location, and took steps to secure space in Liberty for a new production facility.

Let’s backtrack a moment. Last year, the new owner of the Bedinger Building began renovation next to Rock and Run’s brewpub. DeClue and Hatcher initially discussed expanding into that building once construction was complete. They later abandoned the idea and purchased a building in Kearney, Missouri, to launch a second brewery for additional production capacity.

During construction in May 2016, the entire Bedinger Building collapsed and subsequently damaged Rock and Run’s west wall. The destruction effectively limited the dining room space and bar on that side of the brewpub. Rock and Run expanded by taking over The Bell, a former restaurant and bar, located next door at 114 E. Kansas St.

Rock and Run’s temporary brewing outpost in Kearney enabled it to continue brewing while its primary brewhouse was out of commission. Now that the brewpub’s wall has been rebuilt, Rock and Run has fully regained its original dining space. In turn, DeClue and Hatcher made a series of key moves. They closed the Kearney operation. Its brewhouse system was sold to a prospective brewery operation in Excelsior Springs.

“The brewing operation in Kearney was always coming back to Liberty,” DeClue said.

A brand-new three-barrel brewhouse was installed in the Liberty brewpub next to the dining room.

“We started brewing on this system about five weeks ago,” DeClue said.

DeClue and Hatcher also have begun negotiations to finance a 9,000 square-foot building in Liberty. If the deal is completed within the next two months, that space will eventually house a 20-barrel production brewery, canning line, and 2,400 square-foot taproom.

“It was not an easy decision to close shop in Kearney,” DeClue said. “It was a better business decision to come back to Liberty.”

Other developments include signing a deal with Sparta Beverage, a Kansas City-based distributor, and contracting short-term with Weston Brewing Company to can Rock and Run’s Bleach Blonde Pale Ale. The pale ale is now available in cans at the brewpub, HyVee grocery stores, Red X, and other retail outlets.

Once the 20-barrel brewhouse is functional, Rock and Run anticipates producing beer in the new facility by early spring. It plans to move its canning operation in-house by mid-summer 2018.

“Other beers in the works to be canned include 5K IPA, Liberty Squared Golden Ale, and Ryely Porter, once labels are approved,” DeClue said.

Liberty Squared continues to be the brewpub’s best-selling beer, but the owners opted to can the pale ale first.

“Overall, sales of our beer have shot up,” DeClue said. “Once we canned Bleach Blonde, draft sales of it also went up.” “The inspiration [for the beer] actually came from a brewery in Minneapolis that I visited in June this year called Hammerheart,” Conway said. “They had a peat-smoked Irish red ale.”

The medium-bodied beer was brewed with Weyermann oak-smoked wheat malt made from German-grown wheat.

“Tasting reveals notes of sweet fig, stone fruit and hints of toffee. “The smoke slowly comes into play without being too extreme and builds up as the beer warms,” Conway said.

“Depending on response, we will look at scaling [it] up later this year,” Stewart said. It’s your choice whether you go pinky up or not with Martin City Brewing Company’s Pinkies Up. (Pete Dulin | Flatland) Kansas City Bier Company (310 W. 79th St.) taps Heller Bock (8-percent ABV, 25 IBUs) at 4 p.m. Similar to its Helles year-round beer, Heller Bock has a higher alcohol content due to the strength of its initial wort during the brew.

Grain to Glass (1611 Swift Ave., North Kansas City, Missouri) hosts a free talk about “Hops from Three Continents,” including hop harvests in the Yakima and Willamette Valleys. Owner Jennifer Helber will make hop teas so guests can smell the difference in aromas. Enjoy a hoppy beer on tap and learn about this essential ingredient in beer.

Kansas City Bier Company (310 W. 79th St.) teams with the Humane Society of Greater Kansas City for a pet adoption day and fundraiser event. Shop from Brookside Barkery and Beer Paws, participate in a raffle, and drink Pirate’s Bone Coffee. Melissa McGee Photography will shoot photos with guests and their pets (50 percent of proceeds go to HSGKC). The brewery will donate a portion of sales that day.

Tap Chef at Boulevard Brewing Tours & Rec Center (2534 Madison Ave.) is a head-to-head chef competition. Local chefs Alex Pope of The Local Pig and Vaughn Good of Hank Charcuterie compete using three ingredients in three dishes that will be paired with three Boulevard beers. Tank 7 Farmhouse Ale is paired with local corn, The Calling IPA is paired with yuzu juice, and Bourbon Barrel Quad is paired with Boulevard’s Requiem for a Pancake Syrup. Event guests vote on the winner of each round. Best two out of three rounds wins the Tap Chef honor.

Watch This Before Buying Beers for the Fourth of July