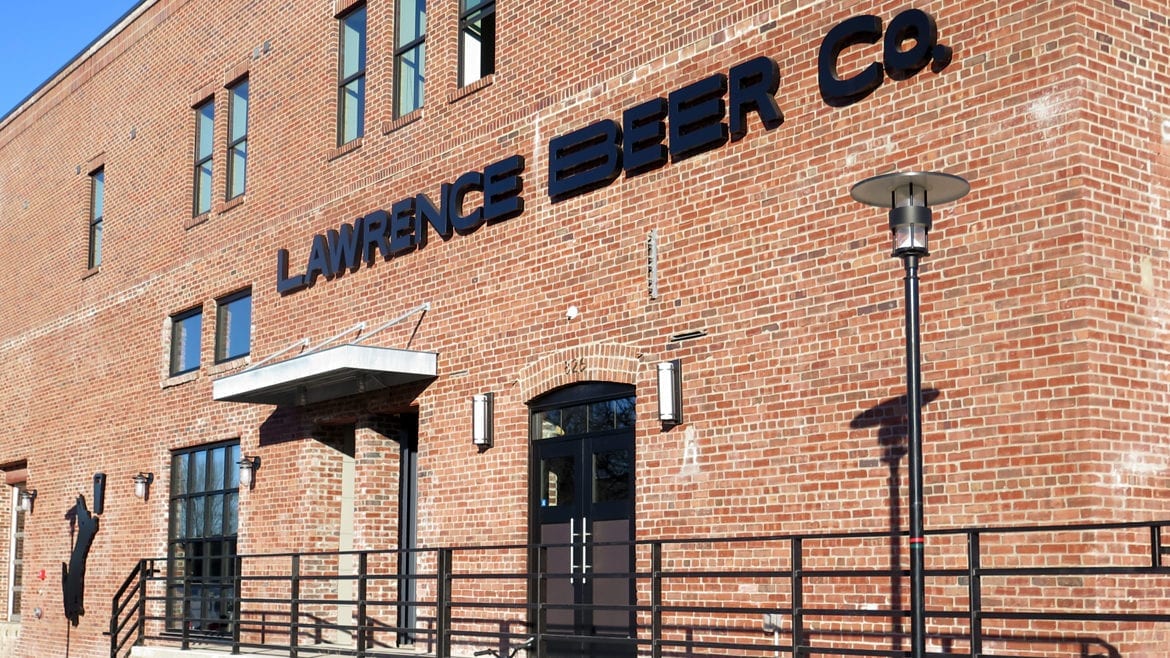 Lawrence Beer Company is throwing a street party for its first anniversary this week. (Pete Dulin I Flatland)
Share this story

Lawrence Beer Company (826 Pennsylvania St., Lawrence, Kansas) opened in the Warehouse Arts District in late August. A recent trip to the brewery and taproom revealed a dynamic space with a solid slate of beer and modern brewpub food to explore.

The light industrial look of LBC’s taproom ties into the history of industrial warehouses in East Lawrence. Exposed steel beams, polished wood panels suspended from the ceiling, wood furnishings, and a cool gray and powder blue color palette present an understated utilitarian look. These elements play a supporting role to the primary artwork. A vast, multi-panel painting titled “Ocean Over Kansas,” by local artist Brian Timmer dominates a wall that frames the taproom. Commissioned by the brewery, Timmer’s painting evokes the vastness of the plains and skies of Kansas. The interior of the Lawrence Beer Co. kept the industrial feel of the Warehouse Arts District in Lawrence. (Pete Dulin | Flatland)

Head brewer Sam McClain left a brewing position at Half Acre Beer Company in Chicago to return to Kansas City. He produces an array of beer styles dialed into flavor and aroma. These beers don’t embody fads, but rather offer a lineup that could appeal to craft beer newcomers and beer geeks alike.

Two Hands Anyhow (5.75-percent ABV) is a caramel-colored English ale that leans sweet. A glass from the last keg of Raspberry Edel, a variant of LBC’s Berliner weisse (4.5-percent ABV) made with eight pounds of raspberries per barrel, tasted slightly sweet with little sourness and subtle fruit.

East Side Pale Ale (5.5-percent ABV) is a classic session ale. Made with four hop varieties, the APA touches on citrus, pine, tropical fruit, and funky hops with reliable balance. Lavender Diamond Smokey Porter (5.0-percent ABV) lives up to its name. The porter was brewed with peat and oak-smoked German malt. That smokiness is evident in the aroma and taste more than the menu description conveys. Chocolate malt flavor is present but smokiness lingers. The brewery also has several saisons, a stout, and another IPA on tap.

Grab a bite to pair with beer but note that the kitchen is only open from 11a.m. to 2 p.m. and 5 to 10 p.m. Black-eyed pea hummus, a fancy grilled cheese, fried avocado tacos, smash patty cheeseburger, pretzel dumplings made with pork and kimchi vinaigrette, slow-roasted porchetta and affogato beignets signal that Lawrence Beer Company goes far beyond bar and grill grub. Free State Brewing’s beers are now on draft at Hy-Vee Market Grille stores in Kansas and Missouri. The beer on tap will rotate quarterly. Moxee Moxie, a New England-style IPA, was chosen as the first beer to kick off the series.

The beer is named after Moxee, Washington, in the Yakima Valley, a region famed for its hops used in beer. Free State added mango to the NEIPA, accenting its tropical fruit character.

Hy-Vee was one of the earliest contributors to the Kansas Craft Brewers’ Expo that Free State has helped organize over the past seven years. As craft beer competition grows for space on retail shelves and taps at bars, Free State pursued this opportunity with Hy-Vee and modeled it after past collaborations with restaurants. Free State valued Hy-Vee Market Grilles’ focus on customers interested in craft beer.

“Hy-Vee Market Grilles are bringing in beers of great quality and value that can enhance the experience of dining and shopping at their locations,” Deman said. “It’s really rewarding and encouraging to expose our beers to an audience that might not have made it to our downtown Lawrence pub or haven’t previously been exposed to Free State Beer in the marketplace.” Lean in to donuts and beer this Hanukkah. (Courtesy of Michael Crane)

Michael Crane, president and co-founder of Crane Brewing, found inspiration from beer and donuts recently while thinking about Hanukkah. The eight-day Jewish wintertime festival of lights is celebrated Dec. 12–20 this year.

Sufganiyot, a round Israeli jelly-filled donut, is traditionally eaten around the world during Hanukkah. Crane and his wife have purchased jelly-filled doughnuts from Doughboys (11559 E 63rd St., Raytown, Missouri) for their annual Hanukkah party over the past few years.

“It occurred to me the other day that our Festiweiss, cranberry and ginger Berliner Weiss, would pair well with these,” Crane said.

Crane went to Doughboys one morning and explained the concept of sufganiyot to the owner, Elisa Breitenbach. He bought some jelly-filled donuts, tried them with Festiweiss, confirmed his hunch, and shot a photo of the holiday pairing to share with others. Chowhound has a detailed recipe for sufganiyot, but Crane recommends heading to Doughboys for a baker’s dozen. Variants of Torn Label’s Old Believer Russian Imperial Stout are available each Sunday at the taproom through December. (Courtesy of Torn Label)

Torn Label Brewing (1708 Campbell) released Old Believer Russian Imperial Stout, a winter seasonal (11-percent plus ABV) that hits the upper alcohol range of the brewery’s roster. Old Believer is available at the taproom, on draft, and in 22-ounce bottles. Described as rich and warm with silky mouthfeel and slightly sweet notes of dark fruit, cocoa and black bread, the beer strikes a balance between fortitude and drinkability. On each Sunday of Advent (beginning this past Sunday), Torn Label will release a different single keg variant of Old Believer. Limited amounts of each variant (to be announced) will be available the same day in 375-milliliter bottles. The epic conclusion of the series will be Siberian Old Believer with a whopping 22-percent ABV. Today is Repeal Day, marking the anniversary of Prohibition’s repeal. To celebrate, Harry’s Tavern (13657 Washington St.) hosts a Cinder Block Brewery tap takeover from 5 to 7 p.m. featuring Black Squirrel Russian Imperial Stout. Get a raffle tickets for each Cinder Block beer purchased and score some Cinder Block gear. Dress in a Prohibition era outfit and get the first two beers for $1.93(3).

There’s a whole lotta shakin’ going on at Ruin’s Pub (1715 Main St.) from 5 to 7 p.m. They will serve half-priced steaks and an alcoholic vanilla bean shake made with Cinder Block Brewery’s 2016 Black Squirrel Russian Imperial Stout.

Get crafty with Boulevard Tours and Rec Center (2534 Madison Ave.) and Emily Farris from That’s Festive AF at Paper Crafts and Boozy Drafts. Farris leads an evening of holiday card-making and cocktail-sipping. Ticket ($25) includes card supplies, a beer cocktail featuring City Market Cider, and an additional beer. Plus, Boulevard will mail your card for you.

Crane Brewing Company (6515 Railroad St., Raytown, Missouri) hosts its Second Anniversary Party at The Taproom. The brewery will tap a new beer every other hour. Food truck Ash & Bleu is available for lunch and Local Pig will serve food during dinner hours.

Jolly old St. Nick sleighs into Kansas City Bier Company (310 W. 79th St.) from 12 to 4 p.m. Take pictures with Kris Kringle and participate in a raffle. One dollar from each sale of Spezial Bier and all proceeds from donations for pictures will be donated to CASA, a nonprofit that works with court-appointed special advocates for abused children.

“We have never brewed a true double IPA on our 15-barrel system until Gustucide,” brewery co-founder Rafi Chaudry said. “When we selected the hop bill for this one, we broke the scale and the bank.”

It’s a Wonderful Flight ($20, ages 21 and over) in the Beer Hall Smokestack Room at Boulevard Tours and Rec Center (2534 Madison Ave.). At 6 p.m., Boulevard’s beer elves will help guests get in the holiday spirit with an expertly-curated flight of Christopher Elbow chocolates paired with wintertime beers.