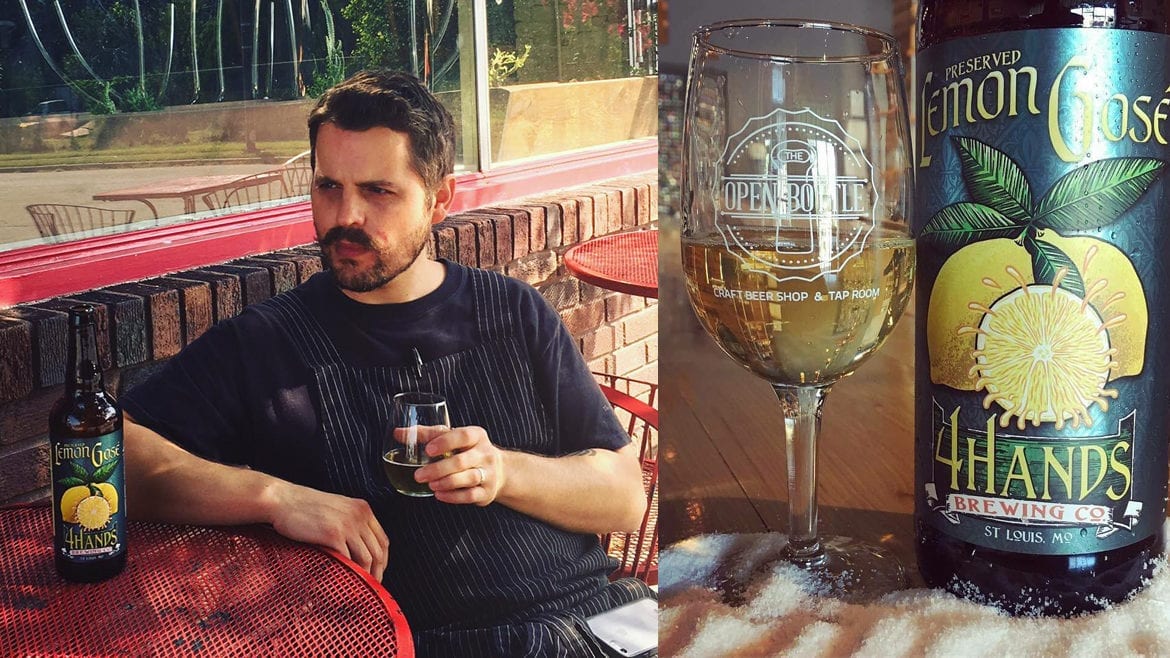 The recipe has remained the same over the past three years of this seasonal release, but each iteration presents a slightly different character.

“When you are using natural and wild ingredients, there is always some variation year to year,” Eans said. “We celebrate this. This year’s batch has more salinity and minerality, and is a little less sour. It’s almost savory in a way.”

The low-alcohol session beer pairs well with food. Eans, who owns and operates Columbus Park Ramen Shop and Happy Gillis with his wife Abbie-Jo, recommended ramen as an ideal food pairing with the gose. In fact, ramen is listed on the beer label as a pairing suggestion.

“The salinity and light tartness cause it to pair wonderfully with a rich bowl of ramen,” Eans said.  “Additionally, I find it to pair wonderfully with oysters. The salty, briny quality is a perfect match. It’s also beautiful with lighter cheeses, such as goat cheese or fresh cheese curds. For our beer dinner coming up with 4 Hands, we are going to make a fresh pasta with herbs pressed into the dough to pair with it.”

The 4 Hands Beer Pairing Dinner at Happy Gillis (549 Gillis St.) is scheduled for Wednesday, Sept. 27. Six beers from 4 Hands will be paired with six courses ($75, plus tax and gratuity, limited seating), including some limited releases and rare beers from the brewery’s cellar. Call 816-471-3663 to make a reservation. 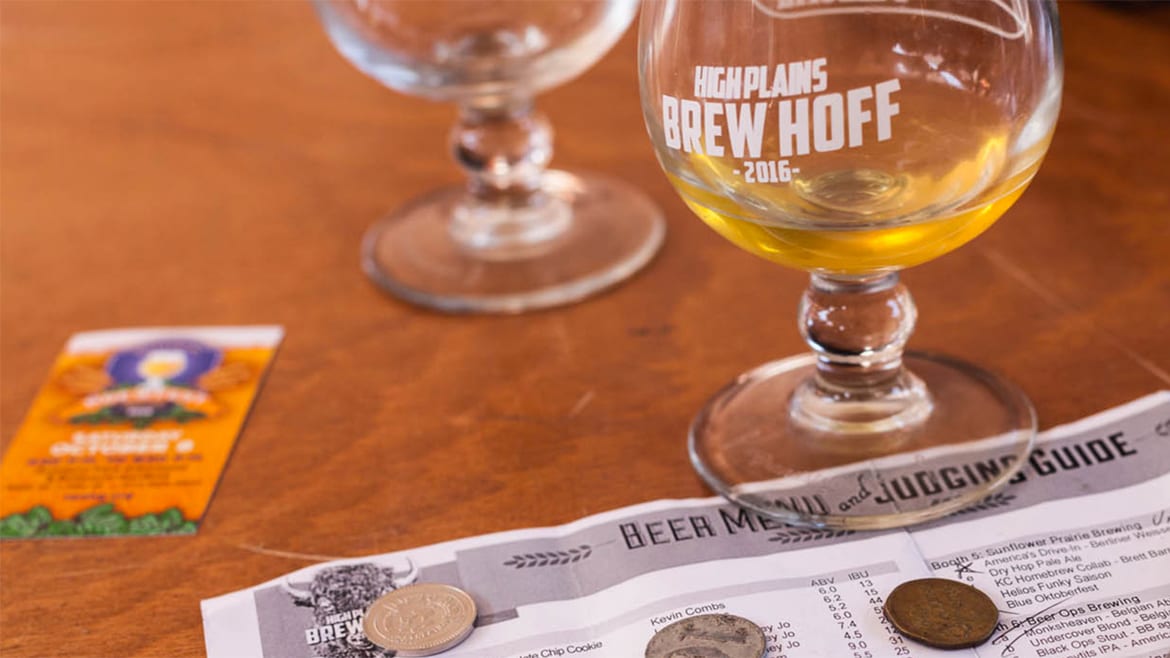 High Plains Brewhoff on the Horizon

The fourth annual High Plains Brewhoff, a homebrewing competition and beer festival presented by Brew Lab (7925 Marty St., Overland Park, Kansas), is set to return from 2 to 7 p.m. on Sept. 23 in Downtown Overland Park. Guests taste, judge, and vote for their favorite craft beer from more than 130 selections brewed by 44 teams. The winning homebrewer will up-scale up their recipe at Brew Lab and the beer will be featured on its taps.

This year, festival organizers have allotted more space for competing brewers and guests. Brew Lab will have food available, served food truck-style. The Ragged Few will perform as the featured main music act. After the festival, guests are invited to a wrap party inside Brew Lab. 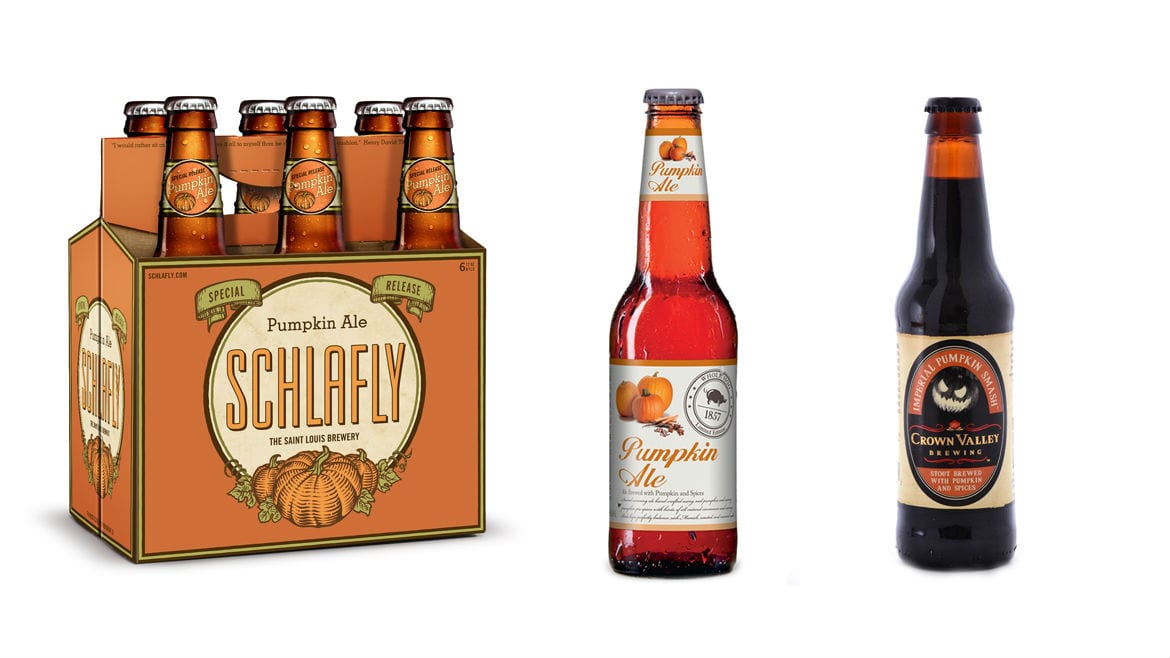 Much like Starbucks’ maligned and celebrated pumpkin spice latte, pumpkin beers return each fall season to the delight or dismay of discerning drinkers. We put out a call to the Beer Tasting Kansas City group on Facebook and had local craft beer imbibers weigh in with recommendations and observations on this seasonal beer. Here’s what they had to say.

Drew Ward: Pumpkin beer is all that is wrong with the world; however, Crown Valley Imperial Pumpkin Smash is the only acceptable pumpkin beer.

David Schumacher (homebrewer, SchuBrew): I’m looking forward to having Dogfish Head’s Punkin in the market this year. I enjoy the malty flavors and slight spice of the beer.

[Fun fact: Dogfish Head founder Sam Calagione created the concept for Punkin in 1994, when he entered the homebrewed beer in a Delaware baking contest. The beer, made with actual pumpkin, brown sugar and fresh spices, took best of show over all baked goods.]

Bri Burrows (homebrewer): The pumpkin beers by O’Fallon are decent with little pumpkin pie spices. I used to be a huge fan of Southern Tier’s Pumking. My palate has changed. It now tastes like I’m drinking cloves right out of the spice jar.

Heather Marie Hawks: I do not like pumpkin anything. That being said, I’ve found the one exception: O’Fallon’s Vanilla Pumpkin.

Greg Dotson: Rumpkin from Avery Brewing is the only acceptable pumpkin beer that I can say out loud that I consume. Aged in rum barrels with blackstrap molasses and spices, the 18.5-percent shouldn’t be scary. Pumpion from Elk Valley Brewing and Kentucky Bourbon Barrel Pumpkin Ale from Lexington Brewing are close runner-ups. 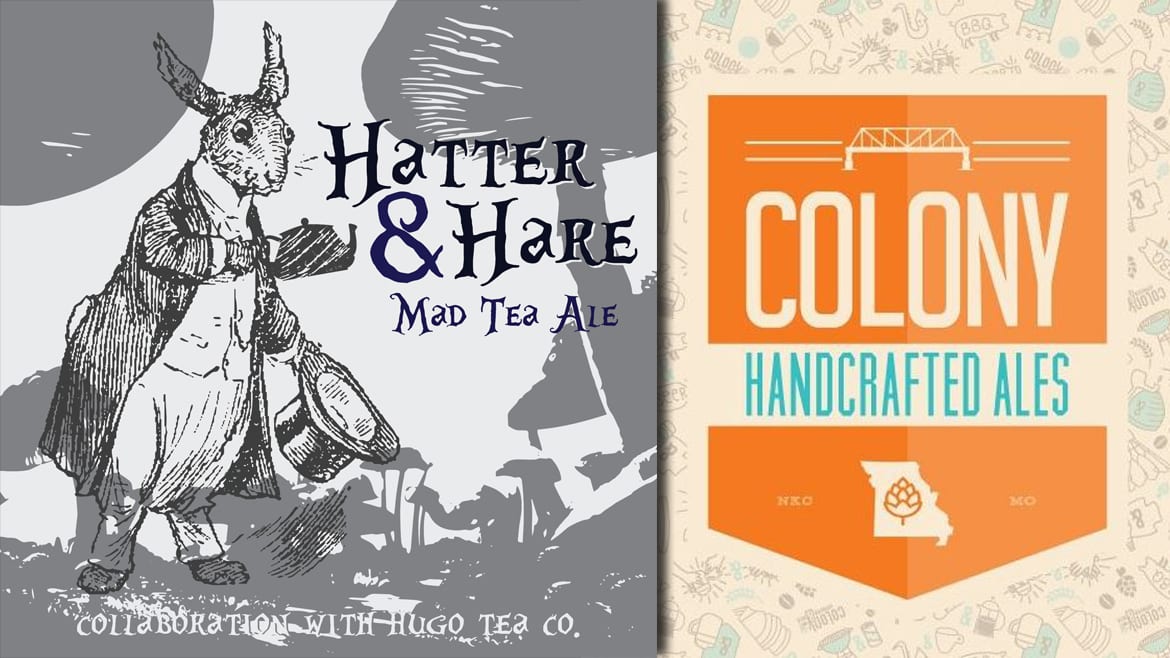 Torn Label Brewing Company (1708 Campbell St.) has several new releases (See additional releases on Sept. 20 and 22.) this week at its taproom and on draft throughout Kansas City. Oscar, a German-style Pilsner made as a session lager for fall, exhibits floral, lemongrass aromas, and a crisp, honey-biscuit sweetness. Also, Hang’em High Batch 14 is the latest in this experimental hops series. Iteration 14 highlights juicy Columbus hops from Kansas Hop Company for a wet-hopped version of the IPA. Wet-hopped refers to hops used less than 24 hours after harvest. Torn Label’s The Witch is the latest release in its Artist Collaboration series. (Courtesy of Torn Label Brewing Company)

Through Sept. 22, Mike’s Wine and Spirits will donate 25-percent of proceeds from growler fills at its Westport, Waldo, and Brookside locations to the GlobalGiving Hurricane Irma Relief Fund.

Torn Label Brewing Company (1708 Campbell St.) releases Fog Machine as part of its limited IPA series, available in four-packs of 12-ounce cans. Originally known as Meet Me in Montauk as a Rough Draught series taproom release, this cloudy IPA was scaled up and brewed with the Conan yeast strain for a floral, dry finish. It’s available at 5 p.m. in the taproom with limited area distribution. A portion of proceeds of every glass and four-pack of Fog Machine sold on release day will benefit Heart to Heart International, a Kansas City area humanitarian and crisis relief nonprofit.

Turn out for Local Pint night from 6 to 9 p.m., featuring beers from Cinder Block Brewery, Crane Brewing, and Stockyards Brewing at Flying Saucer (101 E. 13th St.). Buy a brewski from any of these breweries, and take one of three different glasses home with you.

During Oktoberfest weekend in Downtown Lee’s Summit, Fringe Beerworks (224 SE Douglas St., Lee’s Summit, Missouri) is selling steins that include drink discounts at its taproom all weekend. Fringe’s Grapefruit Wheat, which won top honors at Oktoberfest last year, is a featured beer on tap. Crowlers of beer to go will also be available.

Torn Label Brewing Company (1708 Campbell St.) releases The Witch, a black gruit brewed with rosemary, sage and black currant, as part of its Artist Collaboration series. For the series, Torn Label partnered with Oddities Prints and artist Danni Parelman, who created packaging artwork. Gruit is an ancient style of beer that uses herbs rather than hops as a bittering agent. The black currant in this recipe adds flavor and color to complement the beer’s herbal notes. It’s available on draft and in 22-ounce bottles at the taproom. Oddities Prints will have one-off glasses, hand-printed candles, t-shirts and special edition prints available at Torn Label. Screenland Armour (408 Armour Road, North Kansas City, Missouri) will have The Witch from Torn Label on tap as it screens the supernatural horror film “The Witch” at 10:30 p.m. After the release events, The Witch will be available throughout Kansas City on draft and in 22-ounce bottles.

Sample beers from Limitless Brewing, a brewery-in-planning, in their beer garden at the Overland Park Fall Festival (8113 Overland Park Drive, Overland Park, Kansas). Limitless will have two East Coast-style IPAs and a Blonde Ale on Peaches available for tasting while supplies last.

At Brews for Blood Cancer, Crane Brewing Company (6515 Railroad St., Raytown, Missouri) will donate a portion of the night’s sales to The Leukemia and Lymphoma Society. The nonprofit will offer raffle items, snacks for sale, and a paint-your-own “Relentlessness” Rock for a small donation.

Cinder Block Brewery (110 E. 18th Ave., North Kansas City, Missouri) kicks off its four-year anniversary party, which will last through Saturday, with daily specials and events. Today, enjoy $3 year-round beers. The brewery will filter its Weathered Wit and Warheads candy in a randall for a flavor-filled infusion.