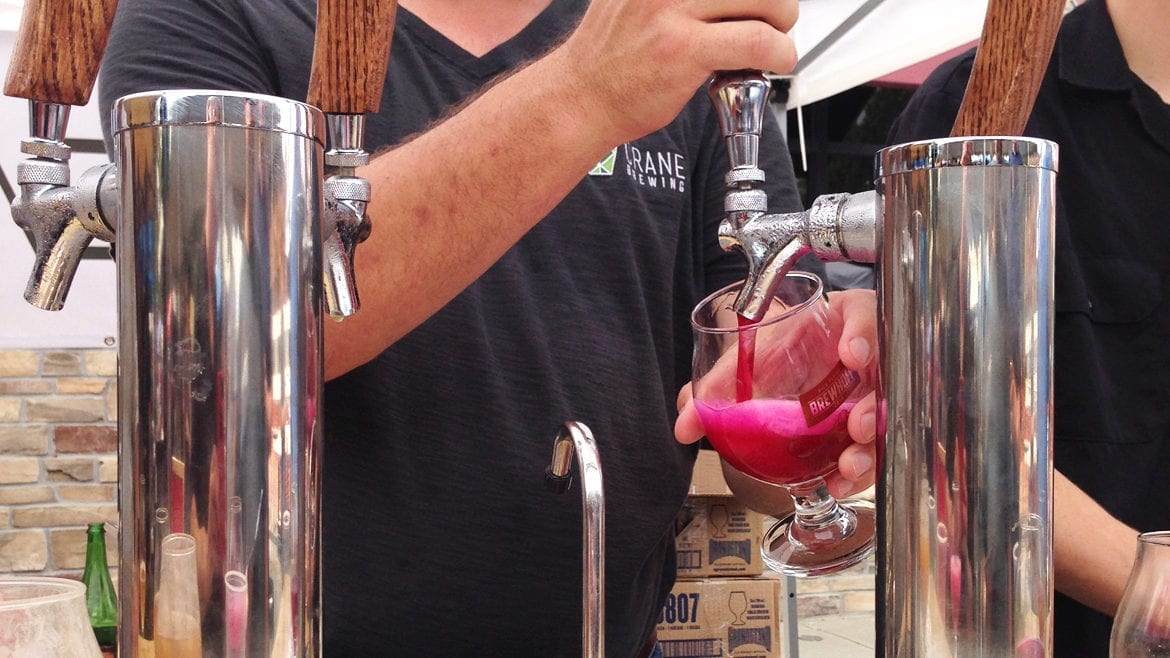 East Forty Brewing (1201 W. Main St., Blue Springs, Missouri) plans to open in a former print shop as a 5,000 square-foot space which will house the brewery, taproom and kitchen. Founder and brewer David Mann and co-owner Matt Bryan anticipate a May 2018 opening for the new venture. The brewery name refers to the east side of the Kansas City metropolitan area.

“We are providing a much-needed hometown pub and brewery for Blue Springs and eastern Jackson County,” Mann said. “Forty refers to 40 Highway, which bisects Blue Springs and also refers to forty acres, a common land parcel size in rural America.”

Mann and Bryan view Blue Springs as the transitional area on the edge of the metro, where city transforms to country.

“We embody the agricultural and recreational activities found outside the hustle and bustle of the city,” Mann said. “I wanted to create a place that would be somewhere my wife and I would like to go and hang out. I wanted to bring this offering to my neighbors and fellow residents that don’t have anywhere locally to go in Blue Springs.” Mann, a homebrewer for seven years, was spurred by positive feedback after pouring his beers at KC Nanobrew Festival for five years. He was captivated by “the crazy idea that I could sell the beer I was producing.”

“I’ve always had that desire to work for myself and sell something that I have produced,” Mann said.

As a brewpub, East Forty Brewing will offer growler fills and limited bottles releases from the taproom. The taproom will sell a limited food menu of snacks and light meals.

“We’ll have an outdoor patio with seating and games for enjoying the downtown ambiance in nice weather,” Mann said. “The remaining 2,500 square feet inside will be built out in a second phase for an event space: The Back Forty.”

Mann and Bryan plan to build a seven-barrel brewhouse and a half-barrel pilot brewhouse. Planned brews include a light, easy-drinking wheat, a pale ale with tropical fruit and citrus notes, a malty and sweet red rye ale, a French saison with ginger and lime, and a porter, occasionally with coffee, chocolate and various other spices. Mann has also experimented with bourbon barrels sourced from a local distillery and brewery for aging beer.

“We’ll brew beers across the style spectrum and supplement with guest offerings of other locally produced beer, cider, wine, spirits, kombucha, cold-brew coffee and other products,” Mann said. “We will brew some beers early on for barrel aging, so that we can release some within year one.” Calibration Brewery’s (119 Armour Road, North Kansas City, Missouri) new lunch menu includes sandwiches, soups, salads and desserts. The brewery also has a wider range of entrees and other offerings for dinner. Happy hour specials (4 to 6 p.m.) include a dollar off craft beer and spirits with appetizers such as chicken tacos, beef tacos and fried pork rinds.

BKS Artisan Ales (633 E. 63rd St., Suite 120) will establish regular operating hours in December (details to come). Look for a grand opening in mid-December. On tap for 2018 is a second floor space (currently under construction), where most of the 1,800 square-foot space will be dedicated to a sour beer program with room for 60 oak barrels. A small koelschip will be installed, allowing for spontaneous fermentation of “beer with terroir of Brookside,” brewer and co-owner Brian Rooney said. The remaining space will be utilized for spirit barrel-aged stouts. Rooney plans to have the second-floor space ready by February and anticipates delivering barrel-aged sour beers and stouts during late summer 2018.

Weston Brewing Company (500 Welt St., Weston, Missouri) released Father Mescan Bog Myrtle Ale. According to the brewery, the beer’s namesake inspiration was St. Patrick’s friend and personal brewer Father Mescan. Mescan favored bog myrtle, a wild, astringent and fragrant herb native to Ireland that was used to flavor beer prior to the cultivation of hops. German immigrant and brewer John Georgian obtained the recipe and hid it in the cellars of the original Weston brewery, established in 1842. The brewery’s current owners recently found Mescan’s recipe in the cellar and recreated the amber ale. Weston Brewing plans to can the beer, which is available now at its taproom. Purchase a Founders Brewing Breakfast Stout and keep the mug (while supplies last) at International Tap House (403 E. 18th St.). Bring that mug back any time before close on Nov. 29th for discount pours.

Tipsy North Oak (6289 N. Oak Trafficway) has a ribbon-cutting ceremony from 3:30 to 5:30 p.m. with tastings, drawings and giveaways at the liquor store.

Grain to Glass (1611 Swift, North Kansas City, Missouri) features five Christmas seasonals, including St. Bernardus’ Christmas Ale, for its Thursday Tasting series, part one, from 5 to 7 p.m. The homebrew supply shop also assembled a set of 24 beers for its Beer Advent Calendar to be enjoyed daily starting December 1st. A dozen beers are also available as a 12 Days set.

Border Brewing Company (406 E. 18th St.) kicks off its We Brew For You fruit beer voting process. Visit the taproom and try a flight of four test beers with a different fruit puree (peach, pineapple, black currant, soursop). Vote for your favorite on Dec. 1 by placing a ticket in the voting box. The winning fruit beer will be brewed for later release.

The Burger Stand at The Casbah (803 Massachusetts St., Lawrence, Kansas) is the first place in Kansas to tap Founders Brewing CBS Imperial Stout. Founder’s Kentucky Breakfast Stout and All Day IPA will be on tap, as well. Try the beers with a special pairing of poutine fries made with limited-edition Founder’s CBS red-eye gravy.