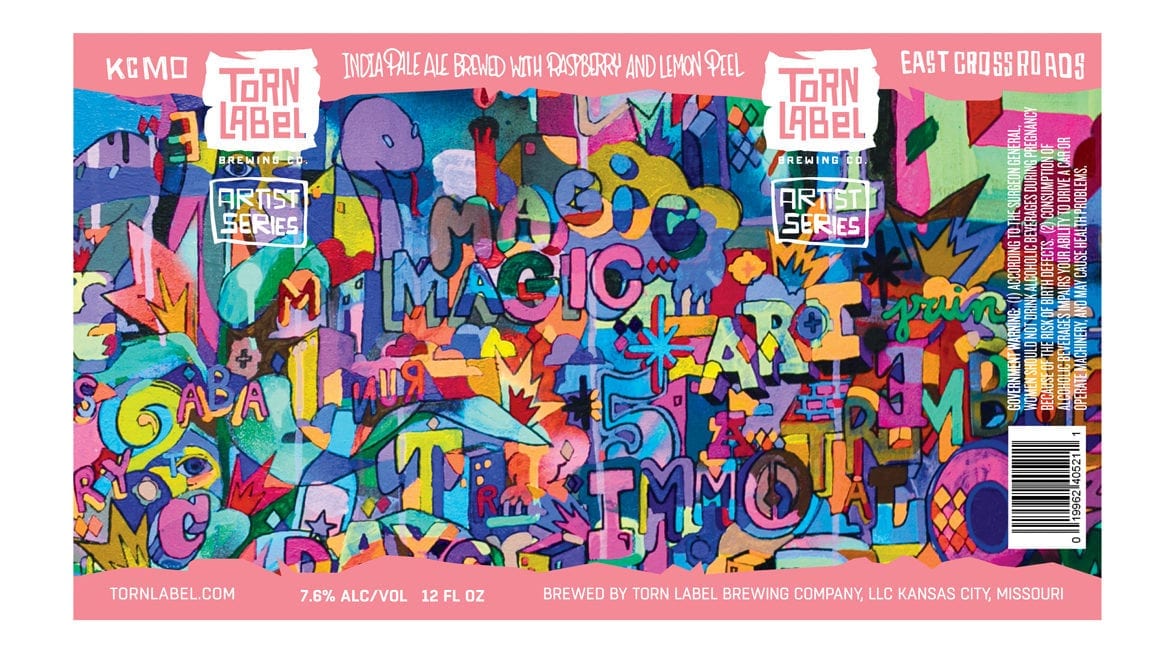 The Magic Magic show is about to start at Torn Label. (Contributed | Torn Label)
Share this story

Magic Magic, an East Coast-style IPA brewed with raspberry and lemon peel, is one of Torn Label Brewing Company’s (1708 Campbell St.) most popular beers. But Magic Magic’s story is not just about what’s inside the can.

Artist and Torn Label sales representative Thomas Woodward created the artwork that inspired the beer, which displays his art on the label. Although Woodward noted the painting wasn’t designed with the beer in mind.

“This is a painting I completed shortly before my employment at Torn Label,” Woodward said. “I brought the painting to show on a First Friday and left it in [co-owner] Rafi [Chaudry’s] office. Co-owner Travis [Moore] brought the idea forward about me doing an artist series collaboration that could use this particular painting as a label and source for inspiration. We also had quite a few conversations over beer. I said a whole bunch of random stuff, and Travis filtered it into a successful beer.”

Woodward used acrylic paint, spray paint and ink to create the painting. He works with Oddities Printshop to create prints of his artwork.

“The painting overall is about everything,” Woodward said. “The moment in the painting that says ‘Magic Magic’ is about the creative process.”

Magic Magic is part of Torn Label’s Artists Series, where a limited-release beer is crafted in collaboration with a local artist.

This year, Torn Label will release Magic Magic in four-packs of 12-ounce cans at a release party and art show at 4 p.m. at  First Friday, April 6, at the brewery taproom. The beer will be available on draft at the taproom. Greg-Co BBQ food truck will serve its innovative take on KC-style barbecue. Magic Magic will also see limited distribution in Kansas City, Missouri, and Kansas the following week.

Limited quantities of new Magic Magic one-off glassware and T-shirts will also be for sale. Woodward will have a risograph print edition, a new T-shirt edition that is limited to 50, and framed and embellished prints. All works are variations on the Magic Magic design. Sandhills Brewing Company, a new brewery based in Hutchinson, Kansas, is set to release its first canned beers April 28. Since the brewery is located more than three hours from Kansas City, the brewery created an online reservation system for four-packs of its 16-ounce cans to better meet demand. Half of the available inventory for each beer is allotted to online reservation. The other half is reserved for walk-in purchases on April 28.

The brewery’s initial three beers for release are Chickadee, a Berliner Weiss; Sparrow, a Dark Mild; and Barred Owl, a Scottish export. The allotment of Chickadee available through online reservations have already been reserved. Free samples of each beer will be on tap. Availability of growler fills will depend on turn-out and capacity. The brewery has completed its underground plumbing and is working on its floors and construction of walls. The walk-in cooler is due soon. Meanwhile, the brewery poured beer at an event with KJO Media and local rapper Krizz Kaliko of Strange Music.

Brewery Emperial (1829 Oak St.) tapped its Pilsener and Porter with house-smoked malt last weekend. Other beers in the works include a Honey Brown Ale made with gambrinus honey malt and honey in the kettle, a special kolsch brewed for the 125th anniversary of U.S. Engineering, a company established in Koln, Germany, and a wheat wine.

“We are fermenting and storing a Dark Wheat made with 100-percent wheat,” head brewer Keith Thompson said. “[It has an] amazing light, or floaty, mouthfeel that neither Sterling [Holman] or I have come across in our collective 48 years of commercial brewing.” International Tap House (403 E. 18th St.) has a pre-release keg of Torn Label Brewing’s Magic Magic that will be tapped at 6 p.m.

“Instead of a neutral American ale yeast, we chose a New England East Coast yeast that accentuates the Cascade, Citra, and 007 hops we added during the brewing process,” Beagle said. “This ale is tart and juicy.”

Boudlevard Tours & Rec Center (2534 Madison Ave.) hosts Summer School, an educational tasting from 6 to 7 p.m. led by a brewery guide and certified cicerone in the Smokestack Room. The first class will focus on historical styles around the world. Tickets ($15) include a guided flight and a full pour of a beer of your choice.