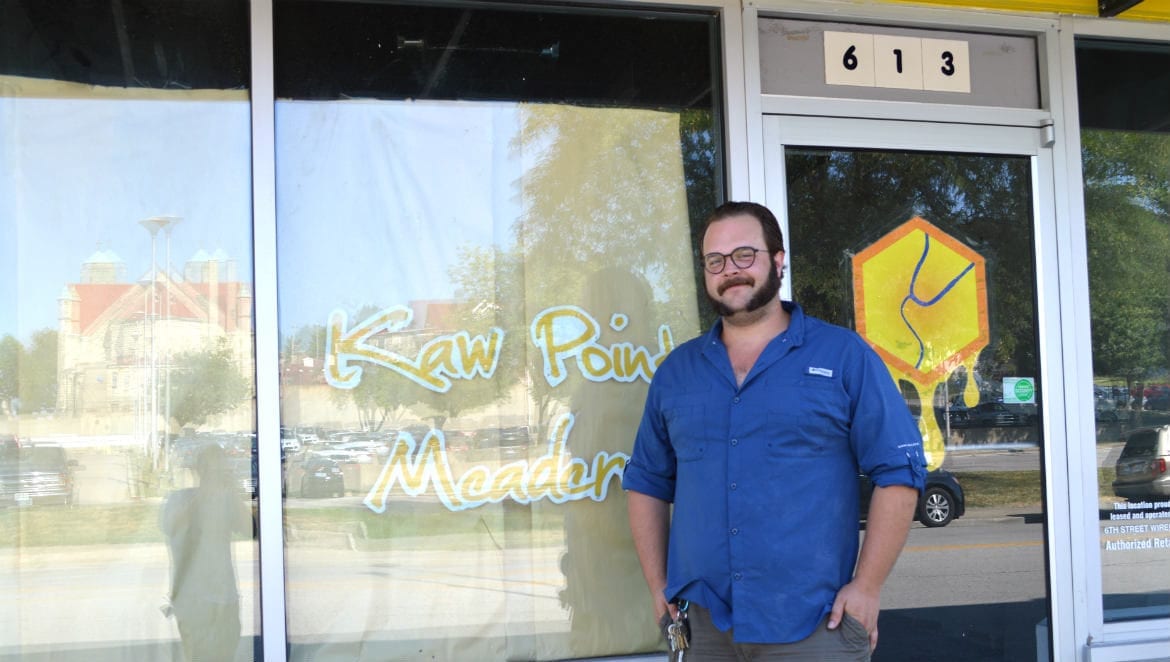 Daniel Bauer said he thinks he’s put about 30 gallons of paint on the side of the building at 613 N. Sixth St. Bright yellow accents flash out from the windows on the second story, a clear beacon drawing you in like bees to a flower.

This is the future home of Kaw Point Meadery. Bauer, John Zumalt, and Sam Suddarth have been working since February to shape the former T-Mobile store into the first meadery in Kansas City, Kansas.

“Strawberry Hill has been great,” Bauer said. “Not everybody here knows mead, but their grandparents are like, ‘oooh, mead.'”

Mead, a fermented honey drink, is having a moment locally. New Axiom Brewing Company, which just opened in Lee’s Summit, Missouri, intends to brew mead and cider in an adjacent space, while Black Labs Meadery out of Olathe, Kansas, began offering its pineapple and black raspberry mead online and via pop-up last month.

Bauer gives me an informal tour of the space, which he’s aiming to open in late fall. The taproom, which will face North Sixth Street, will have dark wooden tables and a bar with a dedicated ordering area (something which New Axiom and East Forty Brewing both opted to build as part of its new taprooms). There will be a small stage — Bauer plays upright bass — for live music, as well.

Kaw Point wants to be family friendly. To that end, the meadery will make its own sodas. Bauer is a big fan of root beer, so that’s the likely starting point.

As for the mead, Bauer will use clover honey for his session series — what will be on tap — in flavors like flowers and bark, cinnamon and hibiscus, lavender lemonade, or rose not rose (which uses rosehips and rose petals).

“I love playing with botanicals,” Bauer said. “The clover honey is available locally and plays well with a number of flavors.”

For what he’s currently calling the standard series, Bauer is aiming to bottle his black currant and toasted marshmallow, pecan praline and maple syrup, or banana walnut (made with black walnuts). The Pollinator’s Reserve will feature monofloral honey (think single origin coffee) like Tasmanian Leatherwood honey or heather honey from Scotland.

“Mead is like a stew,” Bauer said. “You have to develop layers of flavor over time.”

A Festival of Notes

The second annual Hip Hops Hooray, a hip-hop and craft beer festival, will be from 4 to 8 p.m. on Saturday, Aug. 11 at the DeLeon Event Space (3235 Gillham Plaza). The mash-up of music and brews will featured passed appetizers, homebrewers and pro brewers, and plenty of old school hip-hop.

Tap List | Hip Hops Hooray Beer Fest is BackWoodie Bonds would like the world to drink a beer in perfect harmony. Or maybe just with a Biggie track on the speakers. "I've had a beer with so many different type of people," Bonds said. "Kansas City craft beer…

Strange Days Brewing Company (316 Oak St.) just rolled out a new batch of Episodes. The single-hop pale ale was brewed with Vic Secret hops. And even though the World Cup is over, there’s still plenty of soccer at Strange Days as they’re showing European football matches.

As far as coming attractions, Callsign Brewing (1447 Gentry St., North Kansas City, Missouri) has a wheat and a cream ale that should be available in its taproom in a few weeks.

Boulevard Brewing Company’s Bob’s 47 arrived in six-packs and on draft yesterday. Go ahead and shake hands with fall. This is Boulevard’s Oktoberfest seasonal. Township 49 is a release this Thursday from Crane Brewing that is meant to be the essence of Raytown. This label is an artistic interpretation of the spontaneous fermentation process. (Contributed | Crane Brewing)

Crane Brewing (6515 Railroad St., Raytown, Missouri) is tapping Township 49 — a golden ale that’s been spontaneously fermented and then aged in whiskey barrels. Crane Vice President and Co-Founder Christopher Meyers said in an email to Flatland that they’re “proud to share with you a beer uniquely and truly born of Raytown.”

The Martin City Beer Mile begins at 6:30 p.m. at 135th and Oak streets. It’s four beers consumed over the course of a mile. One-person teams will have a beer every quarter-mile, while four-person teams get to share the burden a la a beer relay. Martin City Brewing Co. pizza and beer are supplying the essentials for the event put on by the KC Running Co.

The I-70 Beeries ($70) are back for a second year. From 6 to 9 p.m., Howard’s Grocery, Cafe and Catering (1708 Oak St.) hosts the ‘nine-inning tasting event,’ with ballpark-themed food made by chef Craig Howard and paired with brews from St. Louis and Kansas City. Normal Human is cranking out t-shirts for the occasion and diners will pick whether they think St. Louis or Kansas City won each round.

Louie’s Wine Dive (7100 Wornall Road) will settle the debate once and for all with its Wine Vs. Beer Dinner. The four-course, paired dinner (each course gets a wine and beer accompaniment) has wines from E&J Gallo Winery and brews from KC. Bier Co. The dinner ($60) starts at 6:30 p.m.