Tap List | Homebrews on the Horizon at KC Nanobrew Fest 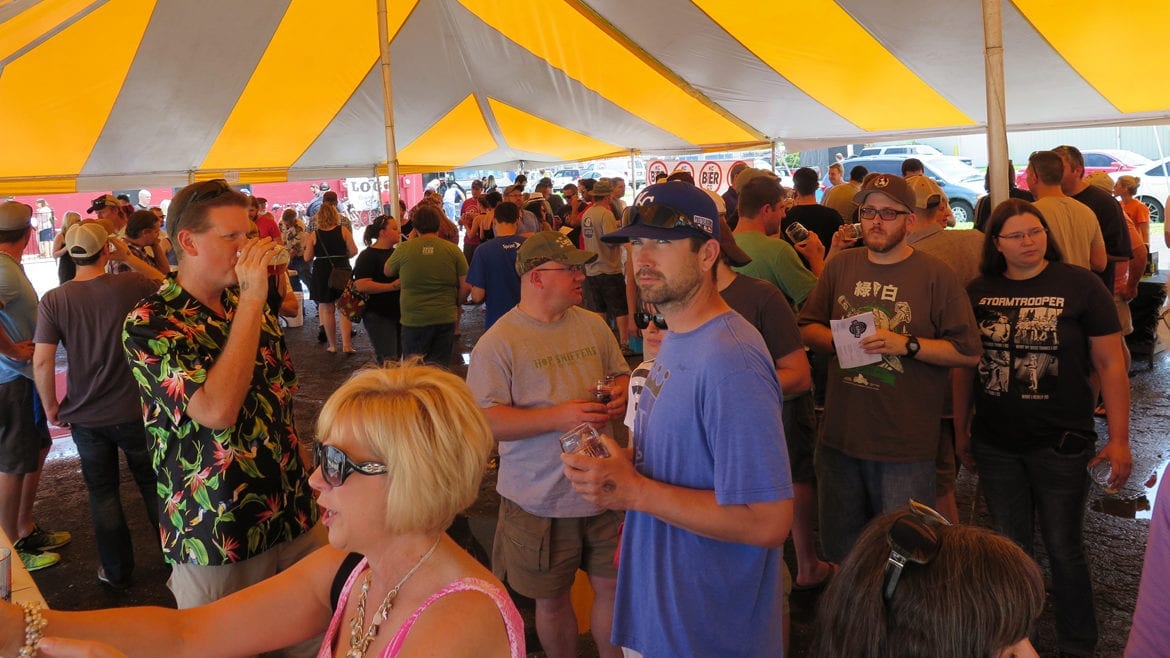 The 8th annual KC Nanobrew Fest at Berkley Riverfront Park from 2 to 6 p.m. on June 24th, is less than a month away. Several homebrewers shared a preview of what they plan to pour.

David Schumacher of SchuBrew said, “I’ll officially debut a DIY backpack jockey box so I can be mobile this year.”

His beers include #MakeIPAsGreatAgain, a classic American IPA with Amarillo, Simcoe, and Centennial hops, and Absurd Barrel-aged EIS Quad with cherries.

“At 19-percent, it should be the strongest thing at the fest,” said Schumacher. Courtney Servaes of Servaes Brewing Company will bring S’mores Stout, a “milk stout with all the campfire fix-ins you can think of,” (in this case: marshmallow, graham cracker, and chocolate.) Also, look for Rainbow Sorbet Sour, a sour witbier with raspberry, orange, and lime.

“The beer will also feature coconut, pineapple juice, lactose, and vanilla to mimic the flavors of a pina colada,” said Grumke.

“This beer is a milk stout brewed with chai from local Chaipod, and coffee beans roasted from Blip Roasters,” said Bri. “David will have Albino Snow Globe, a cream ale brewed with coconut flakes. It looks like a snow globe in your beer. Michael’s Ohana, a Hawaiian-inspired ale is brewed with tropical fruits and coconut.”

Blip Roasters Has a New Spot at 30th and TroostA little before 6 a.m. this morning, Ian Davis opened up four folding chairs just a few hundred feet from the intersection at 30th and Troost. Davis bet on the West Bottoms four years ago when he opened the first…

Steve Williams of Williams NKC Brewing introduces Morning Woodie, an American coffee stout with Kahlúa, oak, and vanilla beans, and Gin and Juice, a saison with oranges, that is aged in oak and Tanqueray gin.

What to Eat and Drink at Boulevardia

Boulevardia, the beer, music, and food festival planned for June 16-17 in Kansas City’s Stockyards District, has announced its beer and food lineup.

Throughout the festival grounds, Boulevard will have a wide range of summer-friendly beers on draft and in cans. Lighter beers include Unfiltered Wheat Beer, Pale Ale, and American Kolsch. Also available are Tank 7 Farmhouse Ale, The Calling IPA, and Boulevardia Sparkling Ale, a blonde ale collaboration created by Boulevard Brewing Company and Piney River Brewing. For those who are gluten-free, they’ll also have Angry Orchard Crisp Apple Cider. The Cellar, adjacent to the Chipotle Homegrown Stage, features Boulevard’s Smokestack Series beers. Look for Bourbon Barrel Quad, Saison Brett, and Love Child No. 8 as well as Belgian beers Duvel Single and Liefmans’ Fruitesse.

Tuesday Foosday happy hour swings into action from 4 to 7 p.m. at the Boulevard Beer Hall (2534 Madison Avenue). Get a Boulevard and Sporting KC co-branded stainless pint with tap handle pour for $16.

Craft KC combines a local craft beer tasting and pop-up makers market in the West Bottoms. A half-dozen local breweries and a dozen makers gather at The Mulberry Room (1321 W 13th Street) from 6 to 8 p.m.

Martin City Brewing and Red Crow Brewing will have beers on tap at Whole Foods Lone Elm Taproom (14615 W 119th Street, Olathe, Kansas). Reps from both breweries will be in attendance. Lone Elm Taproom will donate 10-percent of all taproom sales from 2 to 5 p.m. toward the BMA Foundation.

Grains & Taps is organizing a night out at Kauffman Stadium. To get tickets, bring cash to Grains & Taps (10 Southwest 3rd Street, Lee’s Summit, Missouri) to purchase the tickets. The tickets ($38 apiece) are in section 209 and they’ll also have parking passes ($12). They’ll also be throwing a potluck tailgate.